Lviv is a few hours away from Kiev by train and often called the Prague of Ukraine. I know lots of people who have been and recommended it so we spent a few days there. 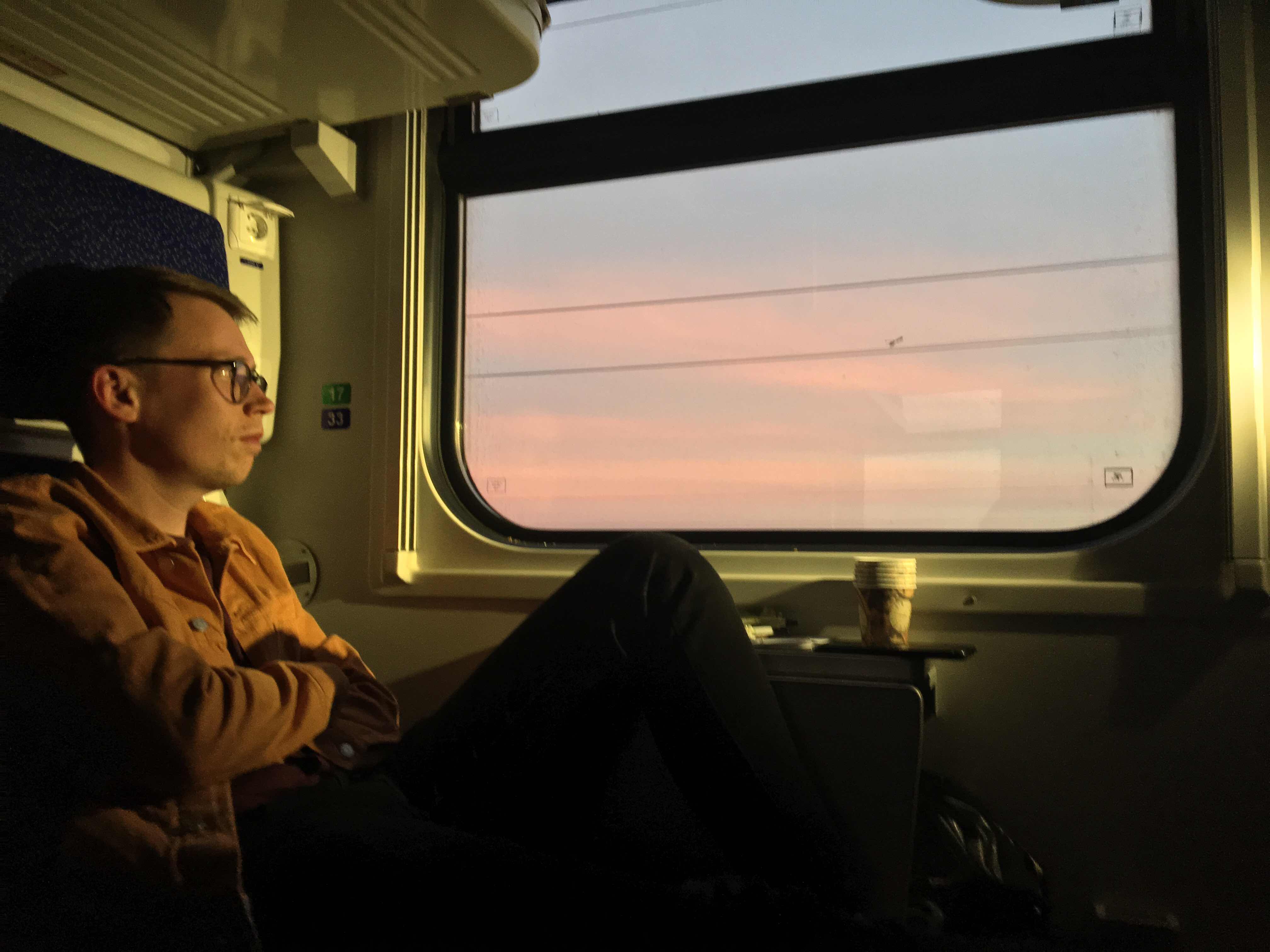 Our Airbnb in Lviv was a lot cheaper than Kiev but the decor was very, Slavic.
Toilet roll in Ukraine doesn’t have a hole!? 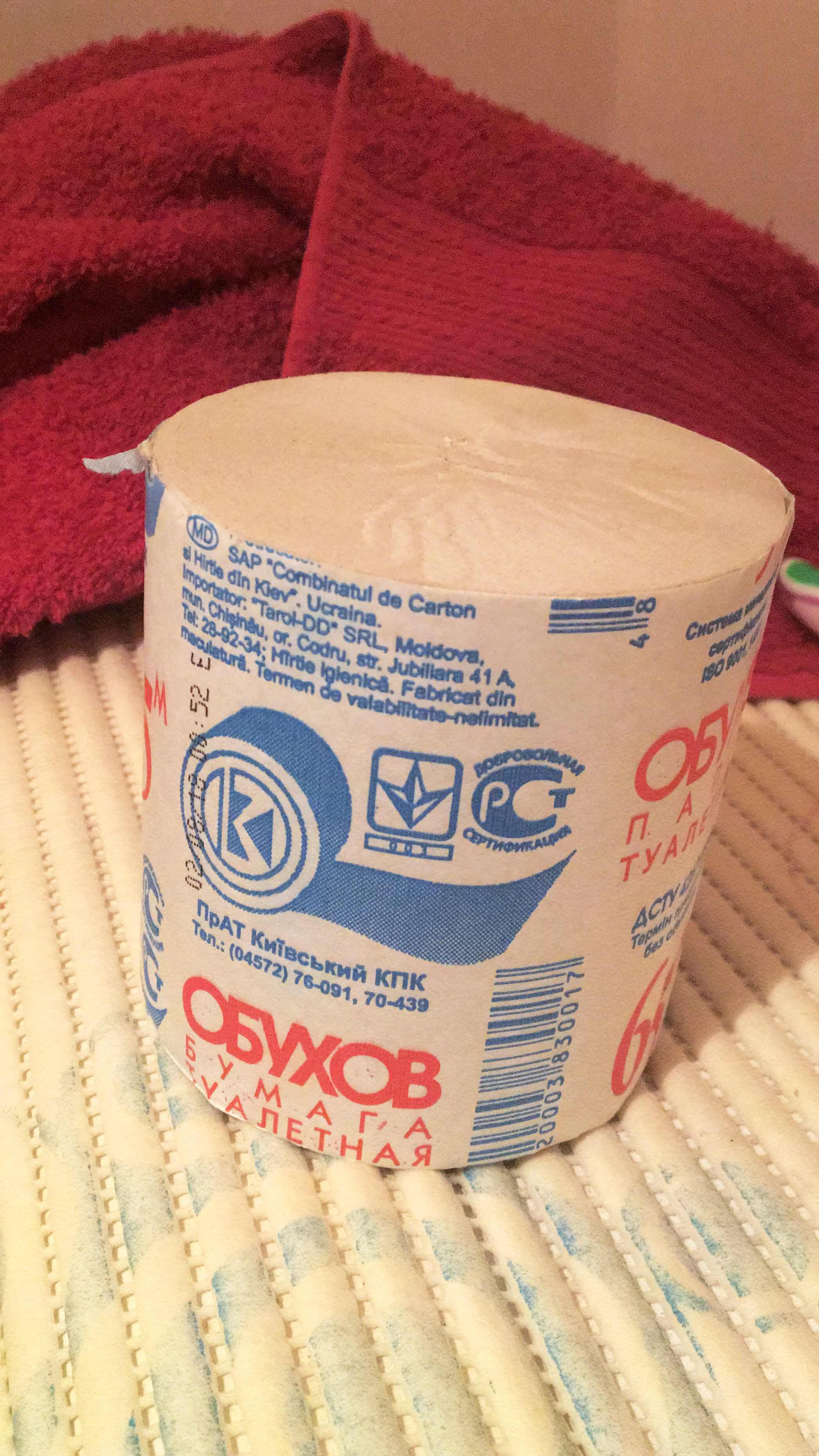 We were never up in time for the 10am walking tours so we found one on Google and did our own. 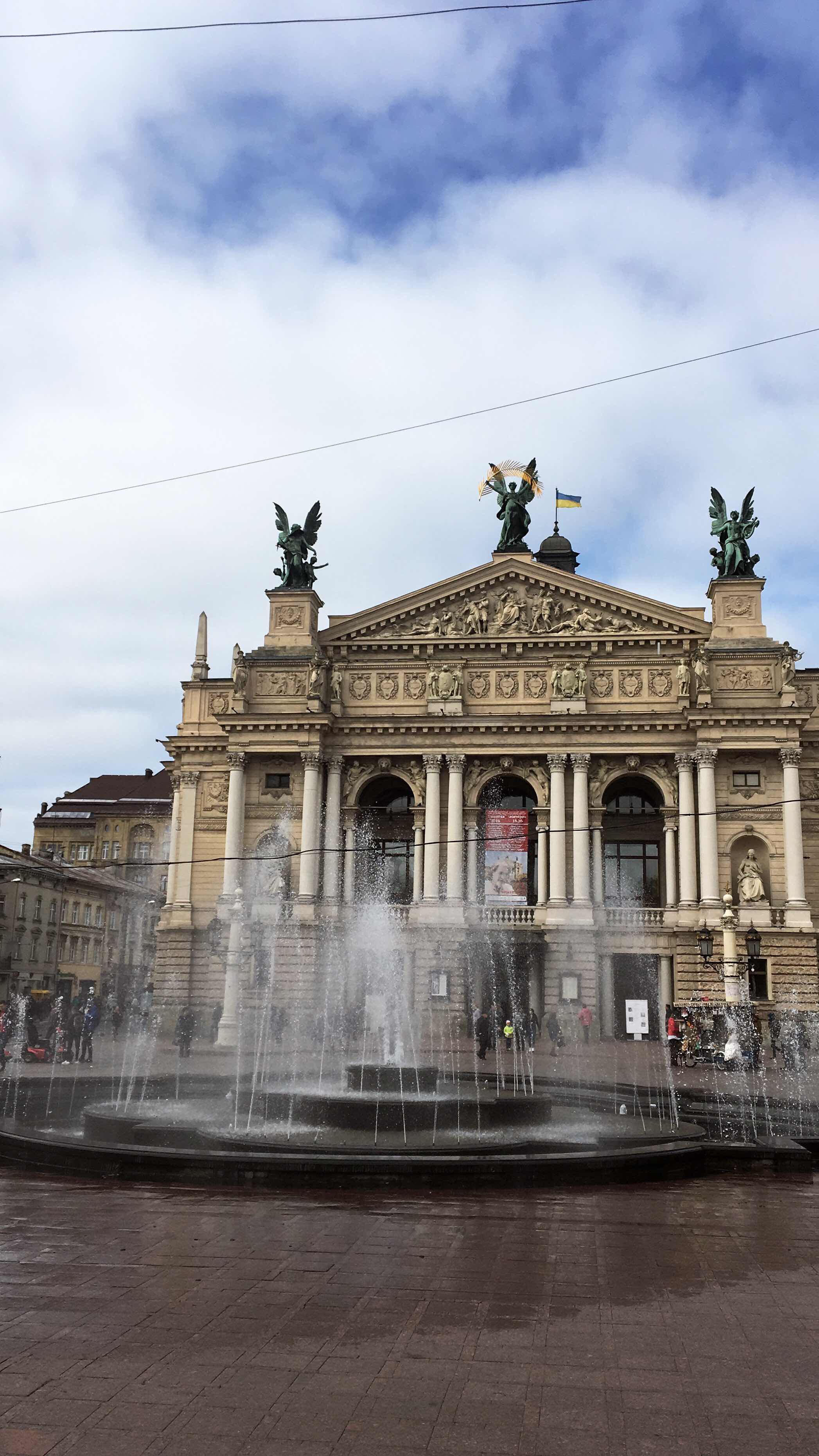 The city is really pretty with lots of nice architecture, fountains and displays. We didn’t go to any museums but the Folk Museum is meant to be good. 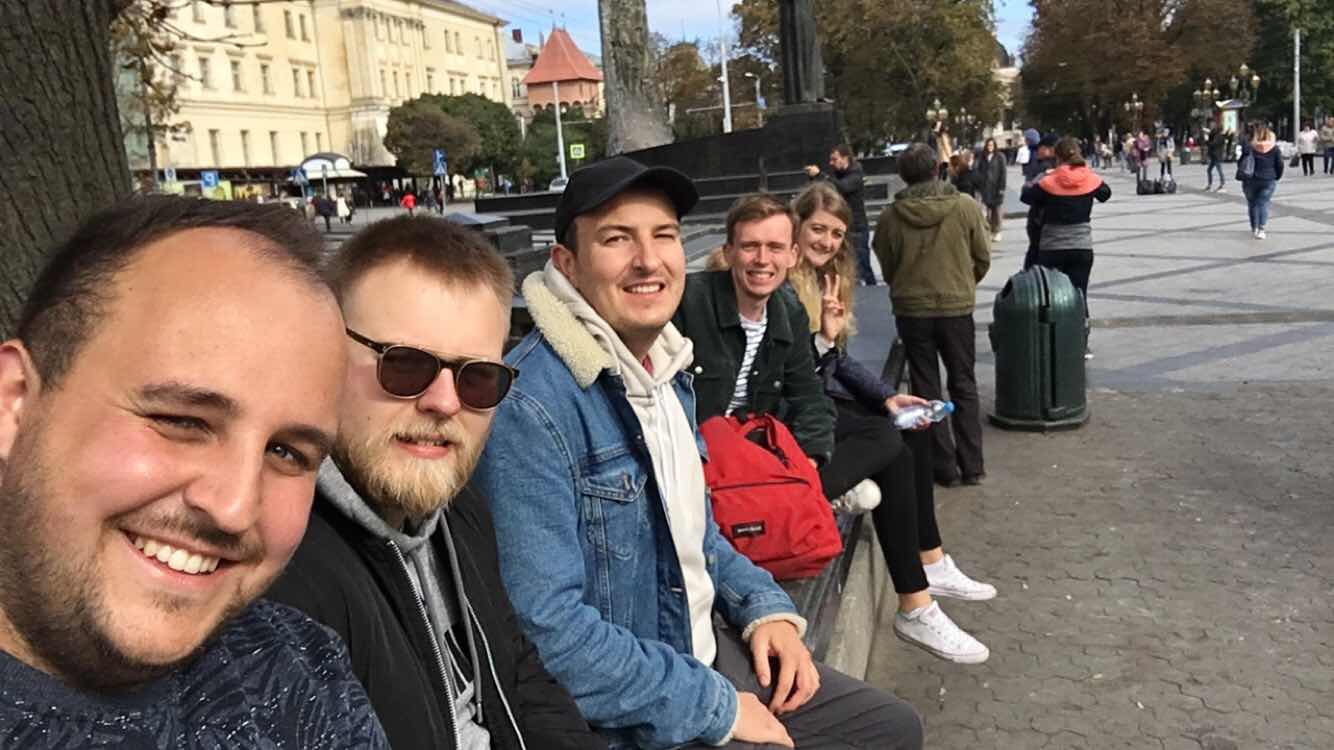 We walked up to the High Castle and viewing tower (which nearly killed me) but the view was nice so I guess it’s worth it...

The main thing we did in Lviv was eat and drink.
Champagne and katchipuri (Georgian break with cheese and egg yolk) breakfast was amazing 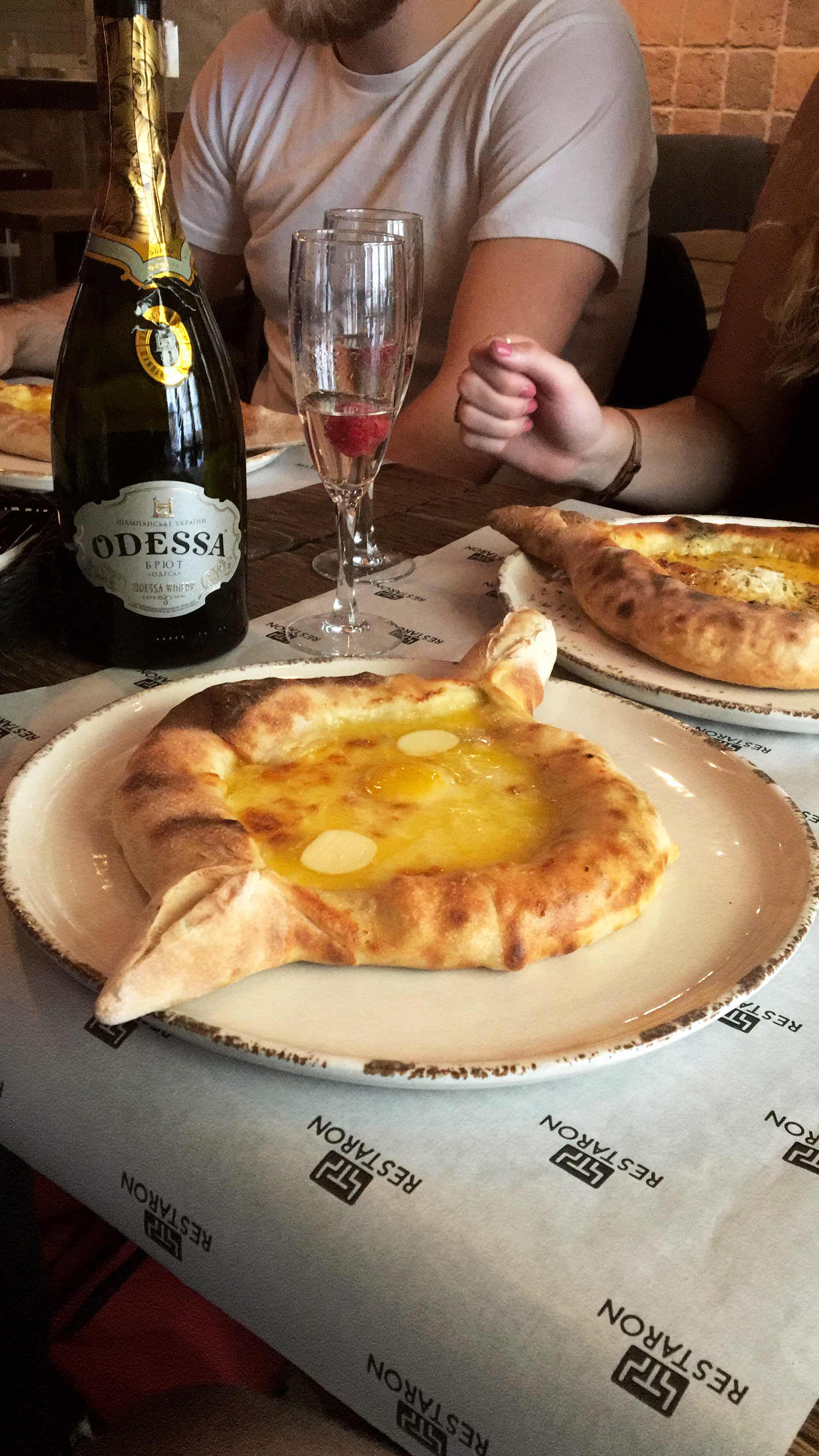 Dogs Like Ducks is a vegan hotdog shop (apparently 107% vegan but I don’t get the reference) which were really good. Being veggie I think the only other hotdogs I’ve had have been in Ikea so not much to compare to, they’d have been better with a bit of crunch. 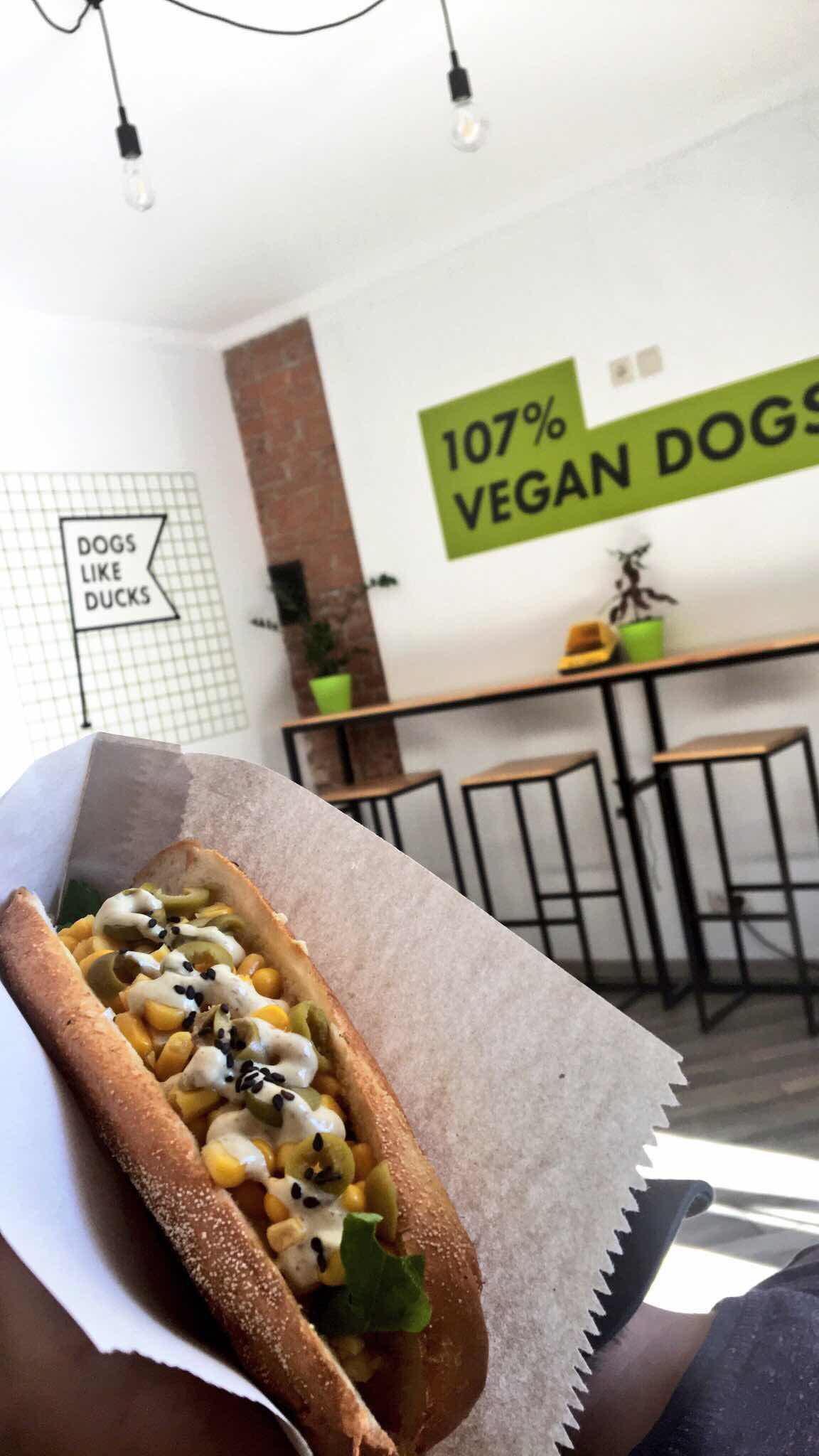 Carrying on the vegan theme we went to Om Nom Nom for dinner, more hotdogs and burgers. The ‘cheese’ sauce was rank so I think get two hotdogs/burgers and skip the fries/wedges! 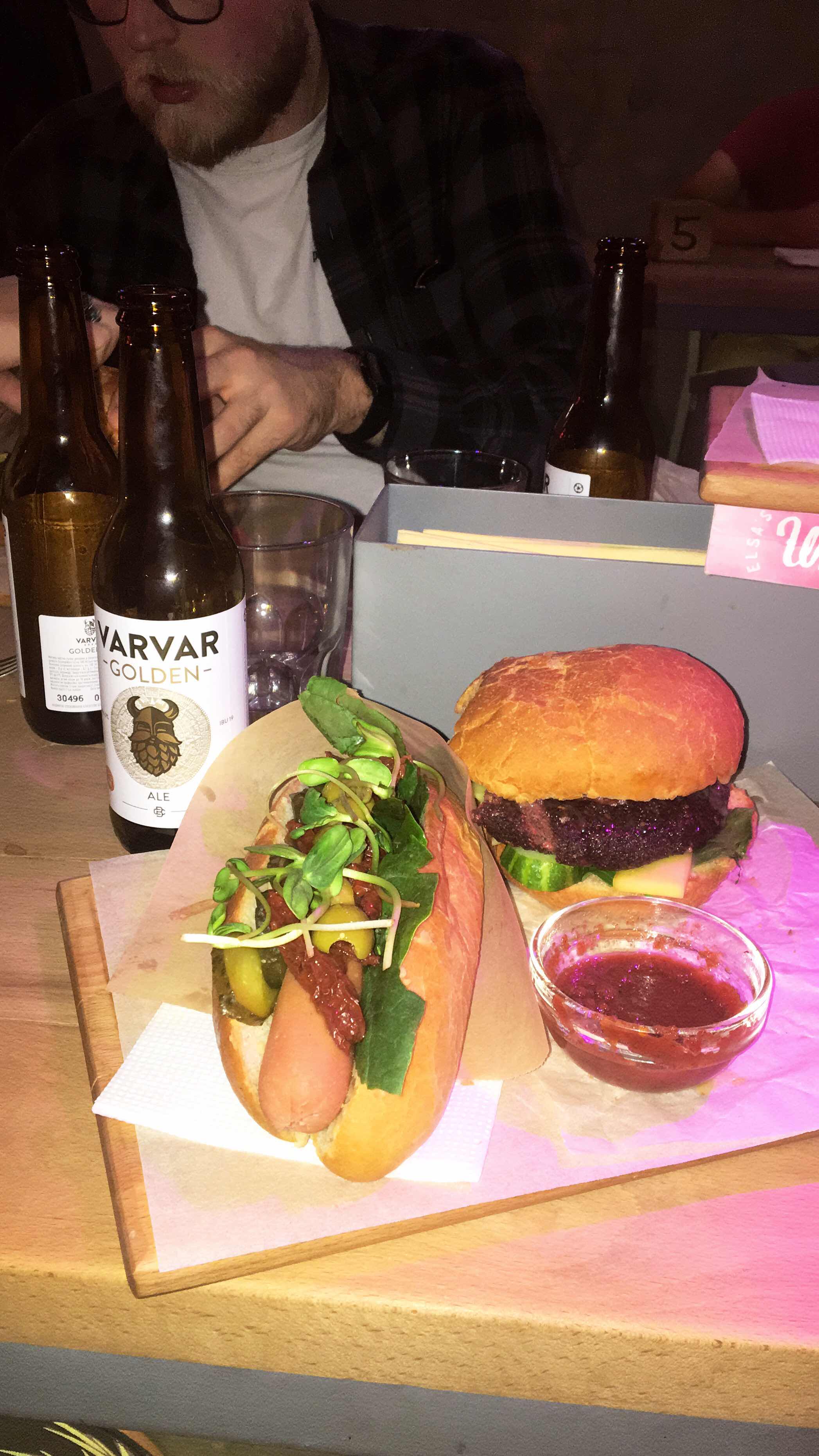 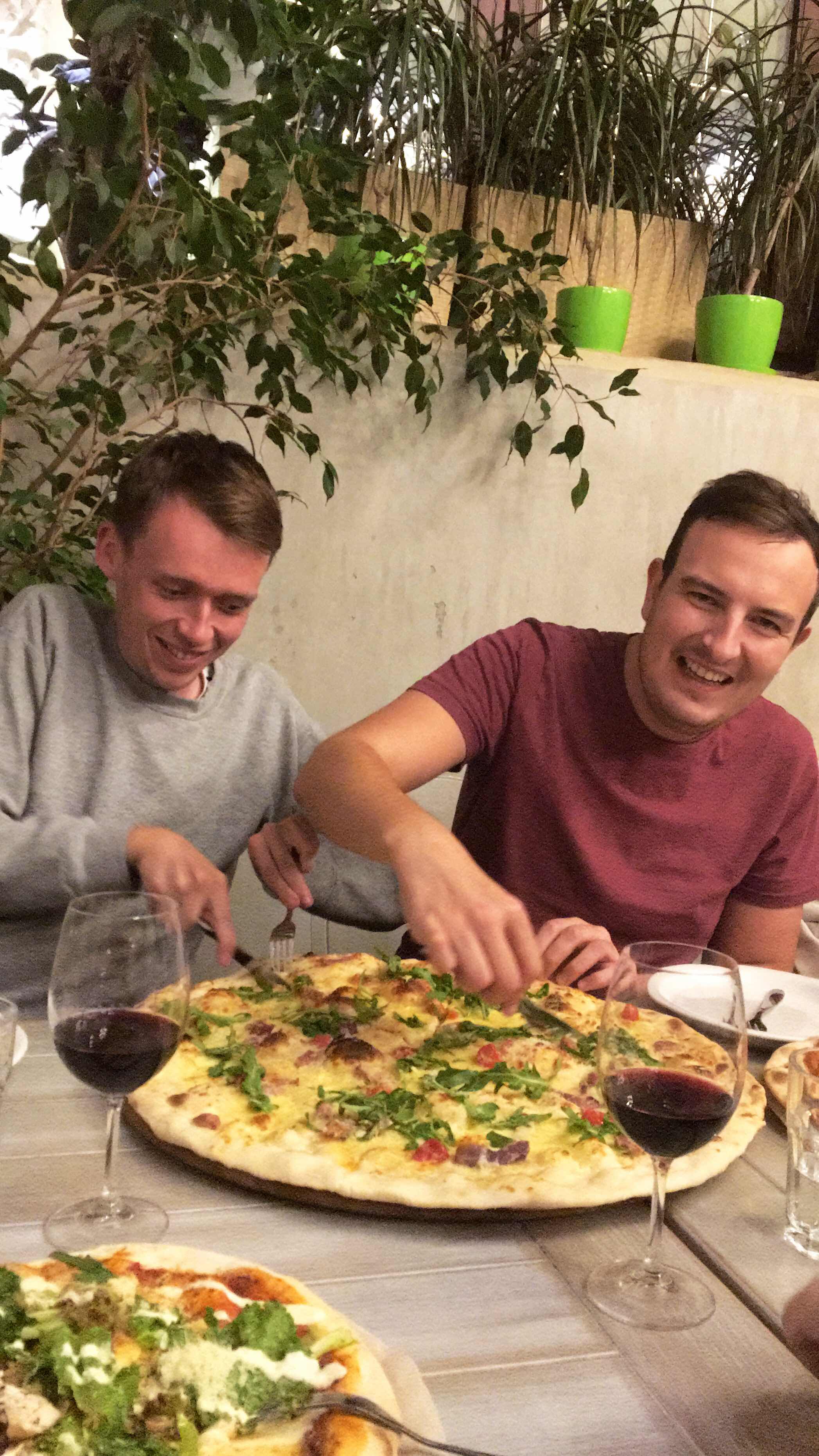 The Craft Beer and Vinyl Festival happened to be on the weekend we were visiting so we went along. You have to buy a 330ml glass and put tokens on a card but it meant that we got to try beers from loads of breweries. There were loads of food trucks but all very meaty and BBQ’y with hotdogs and ribs so I struggled to find something - the only thing was a caprese pitta bread thing which was decent. I got a sleeper train from Lviv to Uzghorod which cost £4.47 and was old but fairly comfortable, I slept the whole way so that was fine.
From there I got a bus from Uzghorod to Košice which should have taken about an hour and a half. We got to the Ukraine-Slovakia border and there we sat for 8 hours... Slovaks are renowned for taking their time but this was a joke. 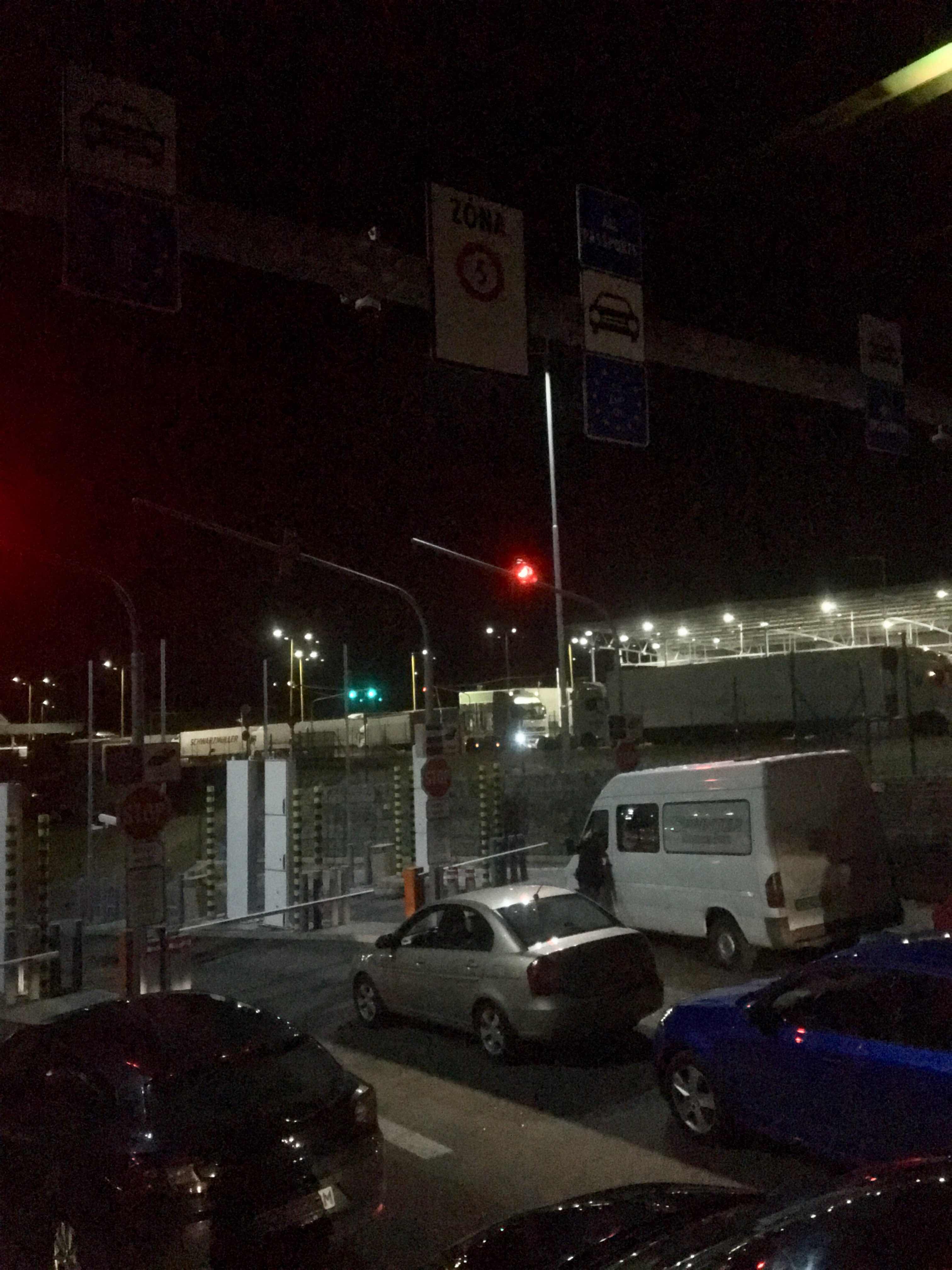 We were sat on the coach inside the border compound just waiting for Border Control to check our passports, I brought some Pringles for the journey but as it wasn’t meant to take long didn’t bring a drink. First world problem I know but annoying all the same.
I got off the coach in Košice and went straight to McDonalds for a drink (and 20 nuggets).

All in we had a great eight days in Ukraine and I’m sure I’ll be back again...

After years of talking about it we finally made it to Chernobyl!

There are a few companies offering day trips from
Kiev, we booked with Chornobyl Tours and had a great guide so I’d recommend going with them. The tour starts early to make sure you have a full day at the site. 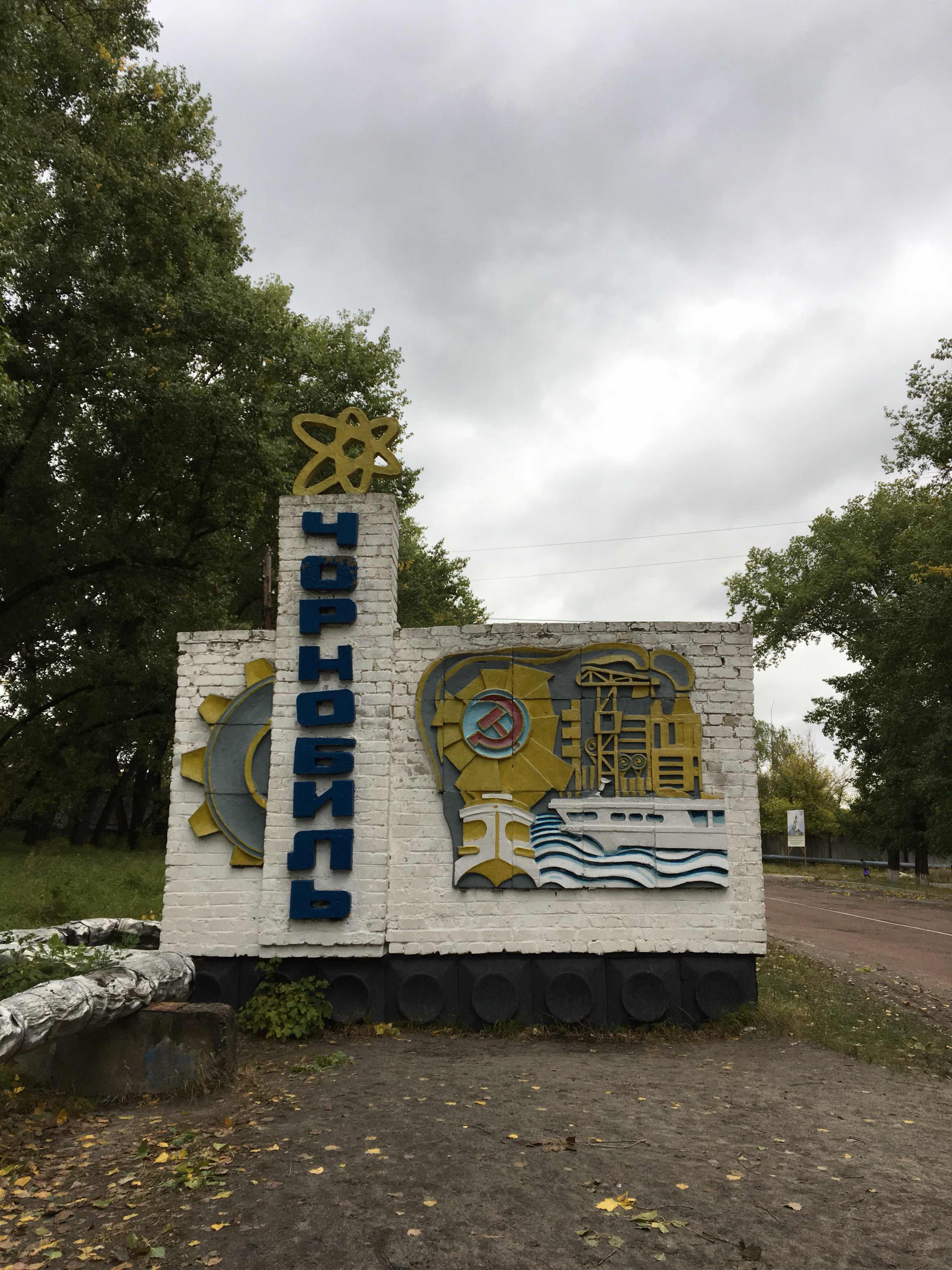 It’s a couple hours drive from Kiev to the Exclusion Zone and once inside you have to stick to the strict guidelines.

We hired a Geiger counter for the day which measures radiation - average background radiation in Kiev is about 0.7mSv/hour and the highest we saw was close to 100mSv/hour.

One of th first things we saw was the Duga 2 Radar which is 150m high, built in secret by the Soviets.

As we drove up it was completely out of view of the road hidden in the forest and the end of the track had the bus stop painted with children’s to disguise it as a children’s summer camp.
I guess in those days you accepted it and didn’t ask questions for fear of being shot! 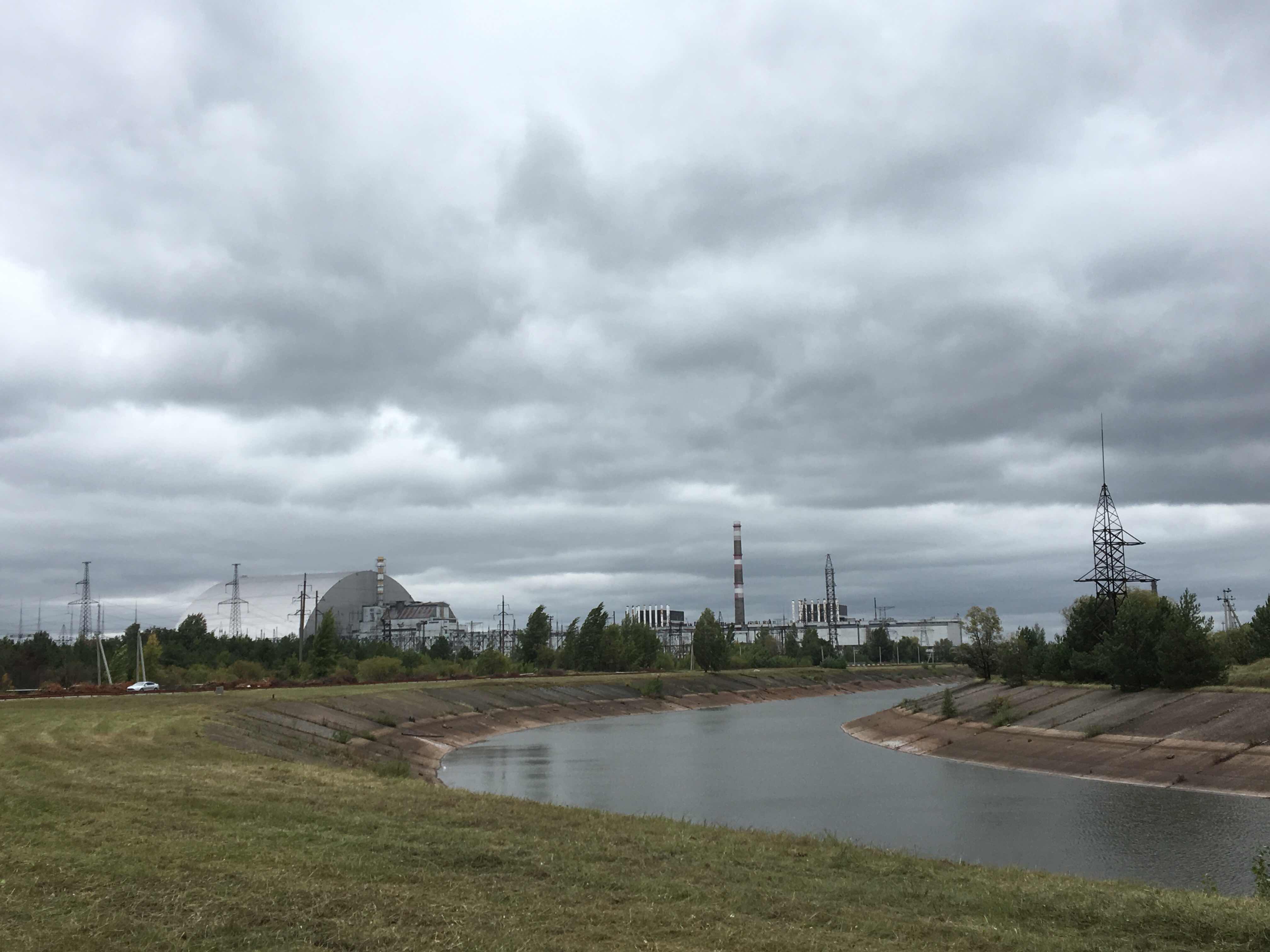 on the left, covered in the sarcophagus, is Reactor 4 where the 1986 accident happened, next to that is Reactor 3 and on the right either side of the chimney are 1 & 2.
The other side of the cooling water lake are Reactors 5 & 6 which we’re being built and never completed, with plans for 12 reactors on the site.

We ate lunch in the canteen just to the right of that photo, a Ukranian feast, most of which we couldn’t finish. 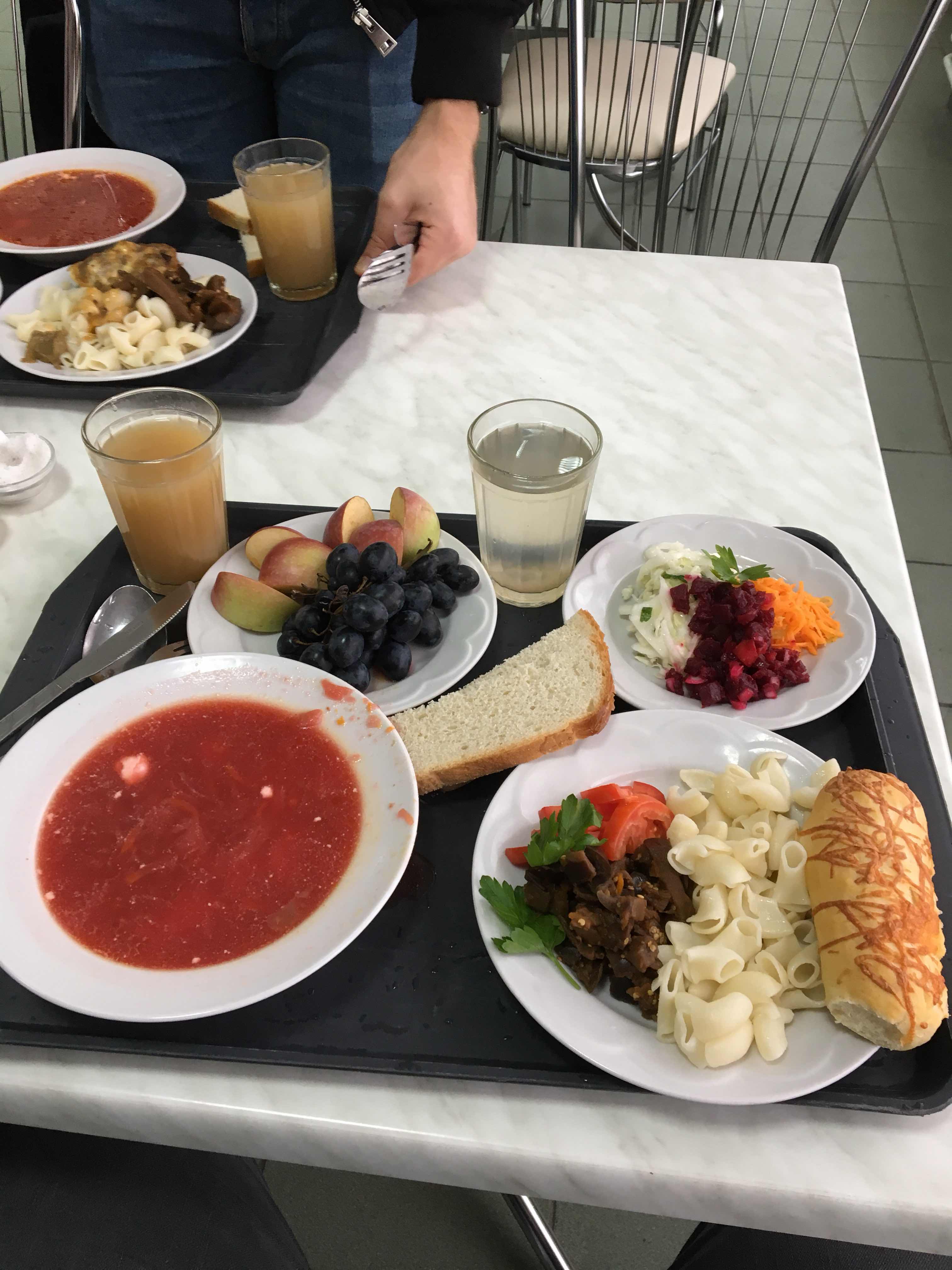 After lunch we visited Pripyat, the modern city built for the power plant workers which at the time was a really desirable place to live with nice apartments, shops, many schools and recreational facilities.
The entire city was evacuated within days of the nuclear accident and has to remain uninhabited for 20,000 years due to nuclear radiation. 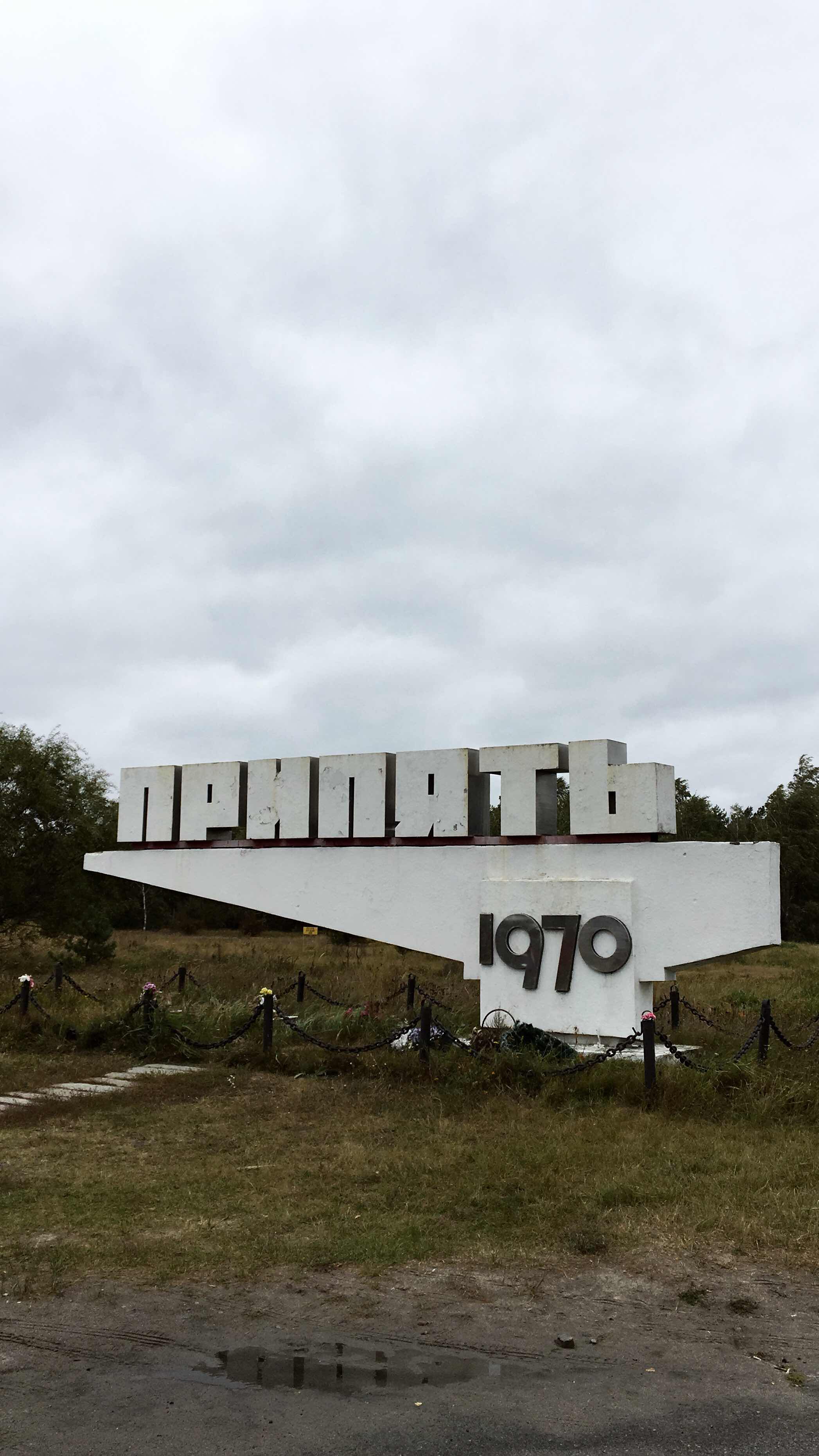 The most interesting thing was to stand on a spot where photos were taken at the time and compare it to now. Nature had completely taken over with trees and plants everywhere which largely disorientate you.

Several of the buildings have collapsed which is why tourists aren’t allowed inside, though we did go inside a few and there are plans to make some save to visit in the future. 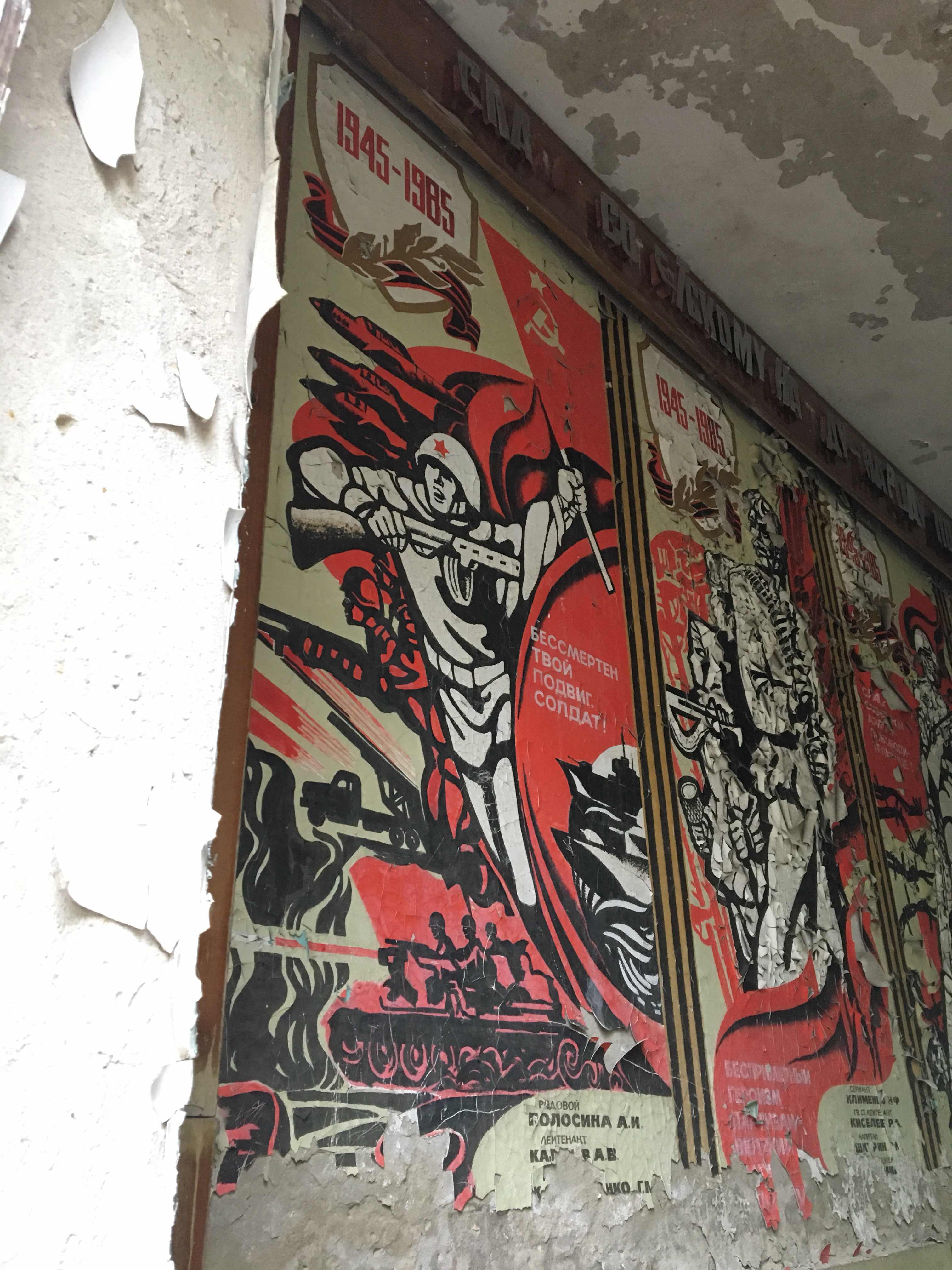 One of the most famous spots is the Chernobyl Fairground which had only just been finished before the accident happened.

Aside from nature taking over there are also lots of animals living in the exclusion zone.
We met lots of dogs who mainly hung around busy places like checkpoints and the canteen as people feed and look after them.

Interestingly most of the adult dogs were only 4 or 5 years old with no older dogs around, maybe because of human population control or due to radiation?
A friend visited over summer to help vaccinate and neuter the dogs so it would be awesome to come back and help with that.

My friends and I have been talking about making another trip to Ukraine for a few years so now I’m in Final year we finally booked it.

I got a train from Košice to Budapest for €9 and then flew from there to Kiev for less than €20 with Wizz Air. My friends flew in from London and met me at the Airbnb which was really close to the city centre. 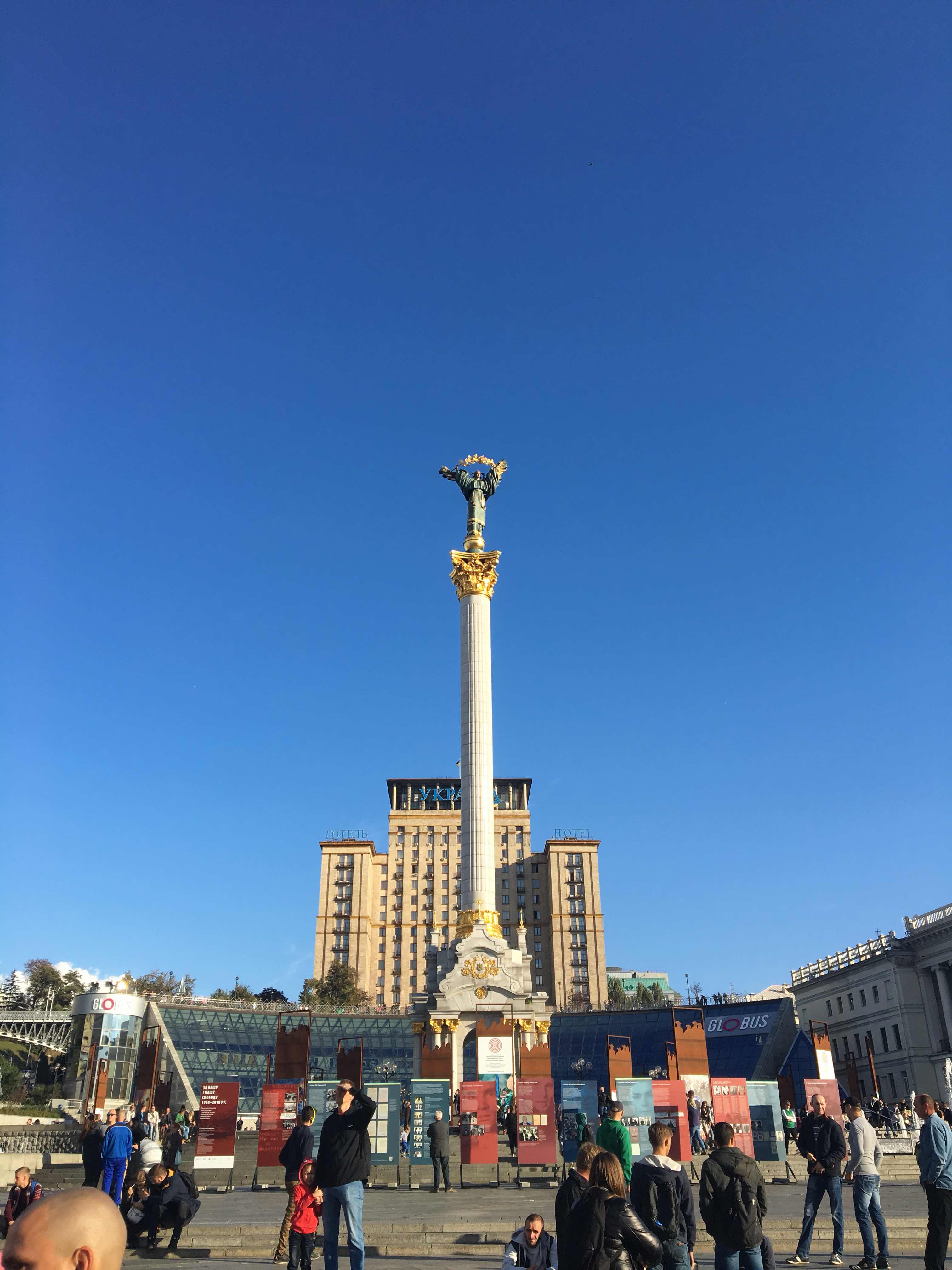 I’ve been busy with exams and vet stuff this summer so hadn’t really researched it but Kiev way surpassed my expectations and was a really nice city.
It was clean, loads of stuff going on, cheap and the people were really nice.

I’d definitely recommend doing a walking tour ‘cos we got to see things we’d missed after spending a good few days in the city. 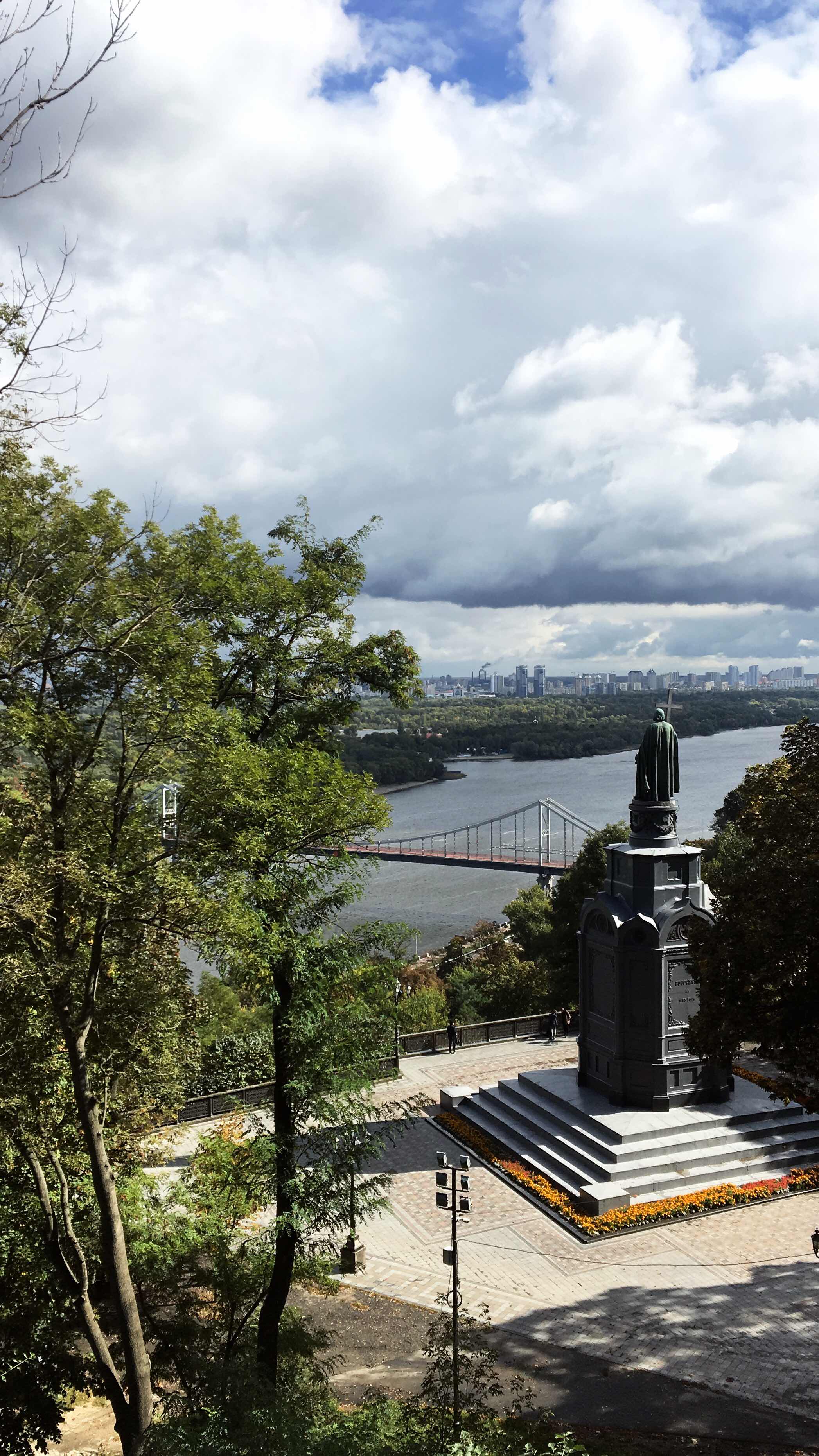 I’ve seen the Winter On Fire documentary about the 2013 revolution a couple times and it was really interesting to see everywhere where that took place.

There were so many good bars and restaurants that we ate and drank ourselves silly.
One of the best was OB (Last Barricade) which is under Maidan Square in the middle of a shopping centre. You go in to the small reception area, say a password and then a door opens up to a big restaurant. 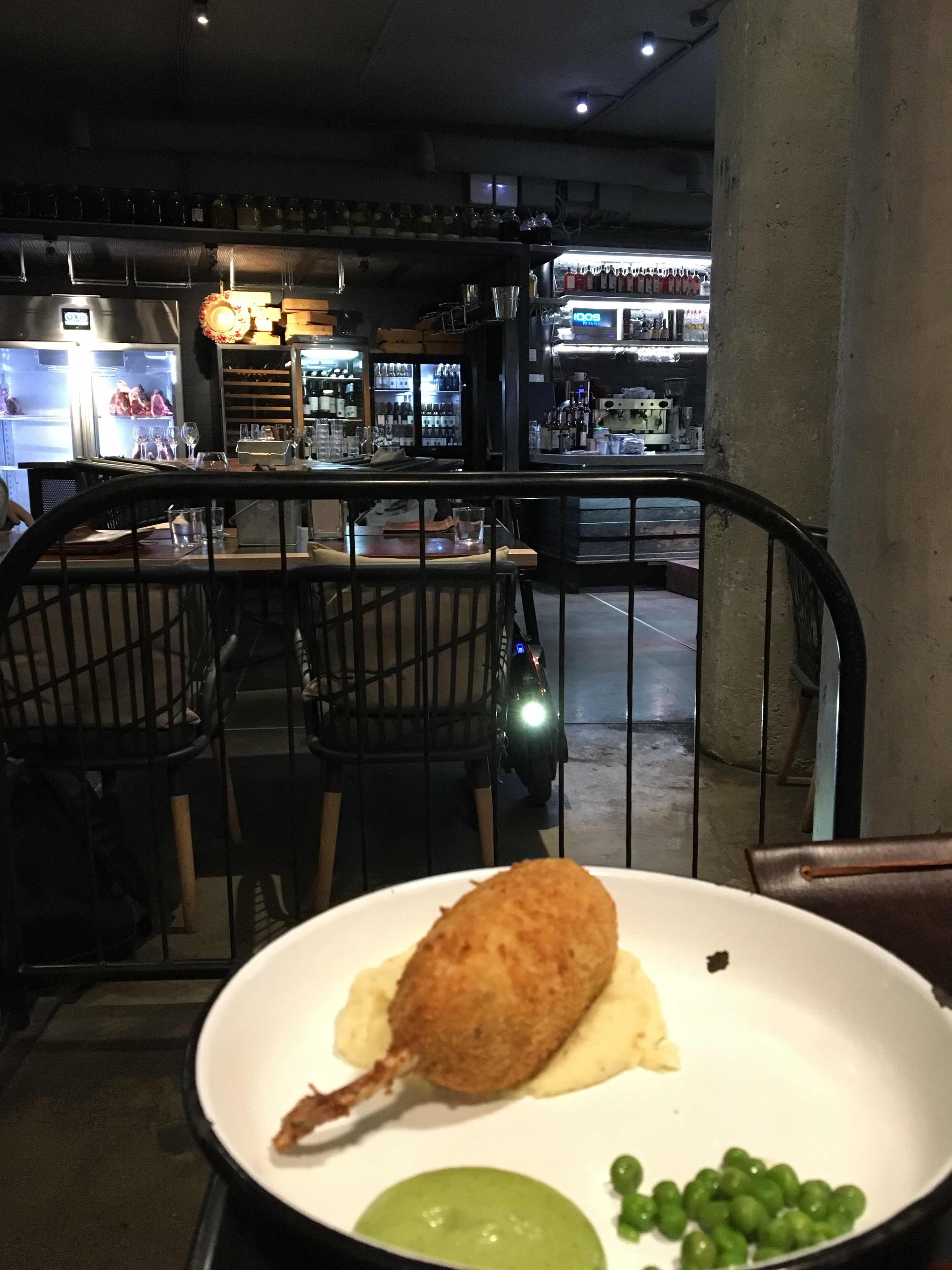 We all ordered Chicken Kiev ...when in Rome and all that.

Day one of Equine Block 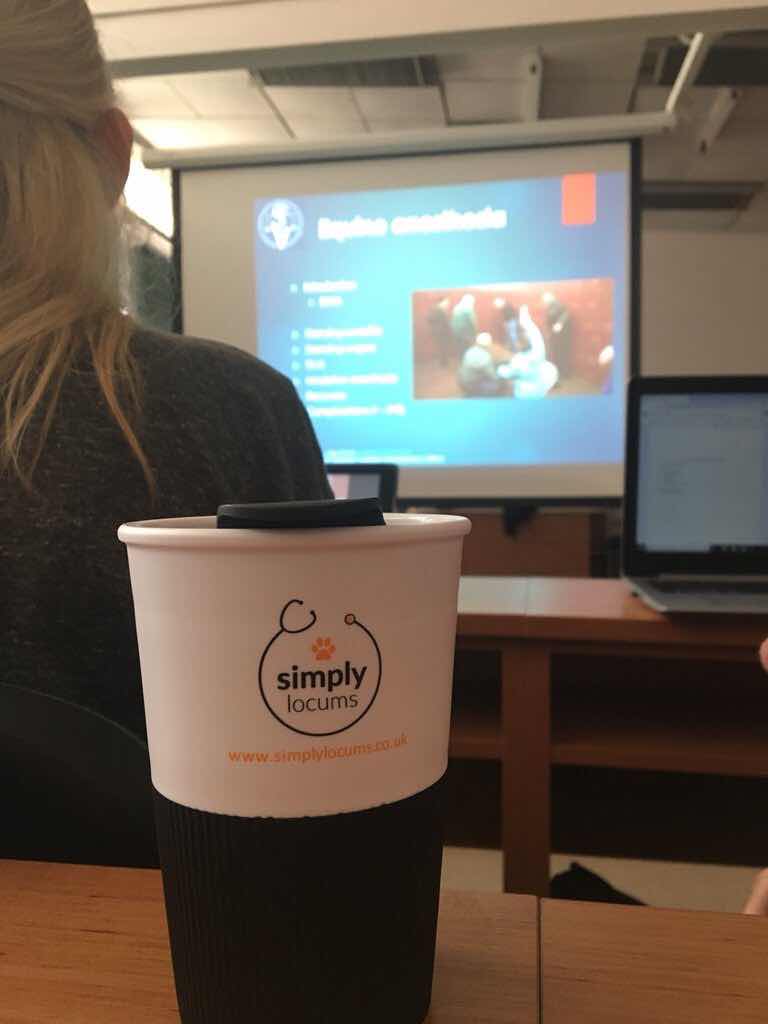 We've just finished my final (hopefully!) Freshers Week and had an awesome time with the best people.
I usually organise the week for the new students, booking bars and events then we finished with a house party at ours on Friday night. There were a few hundred bottles to clean up the next morning so I think everyone had a good time!

This pair came to visit and I didn't take many photos but these sum up the week pretty well... 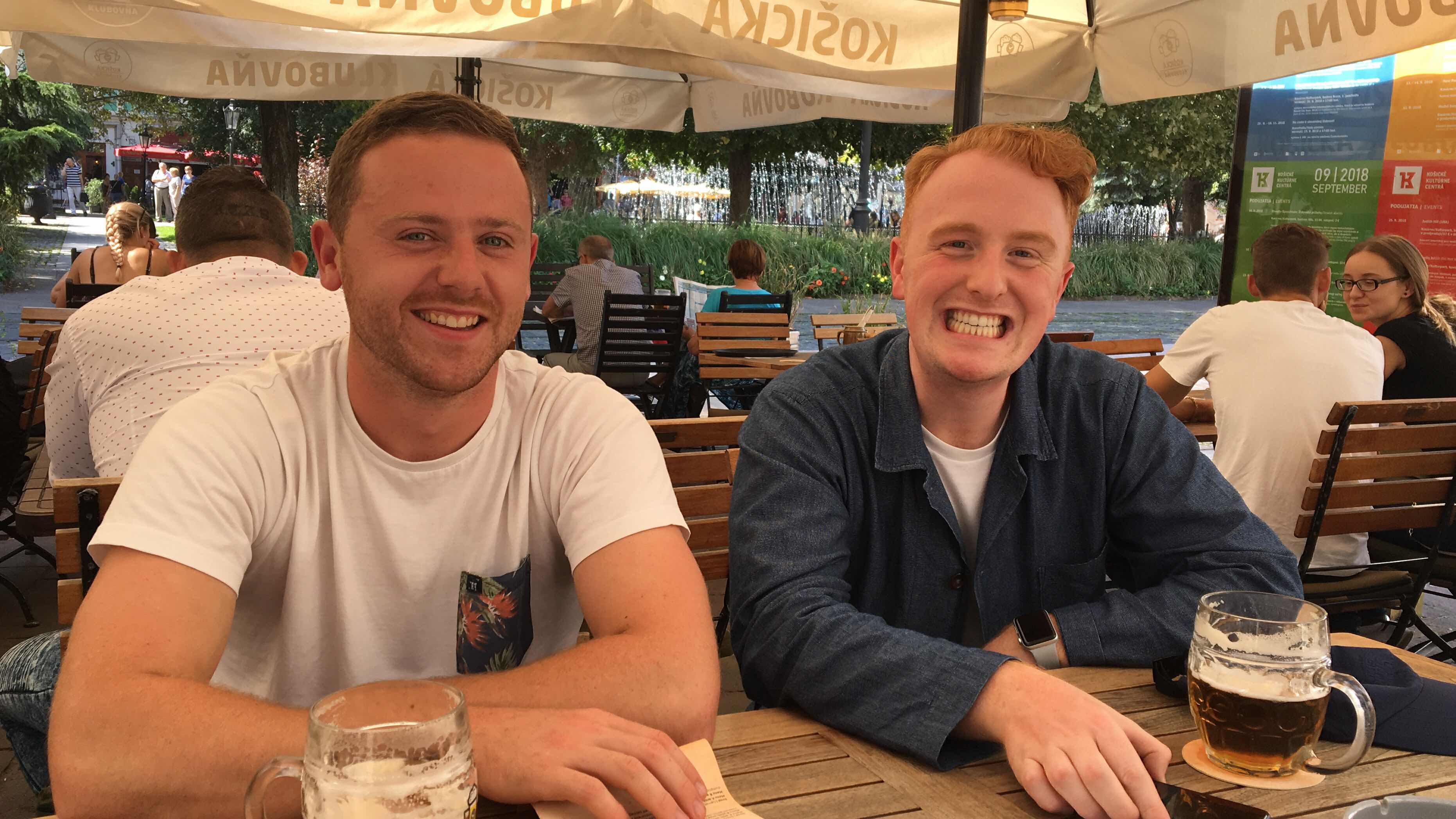 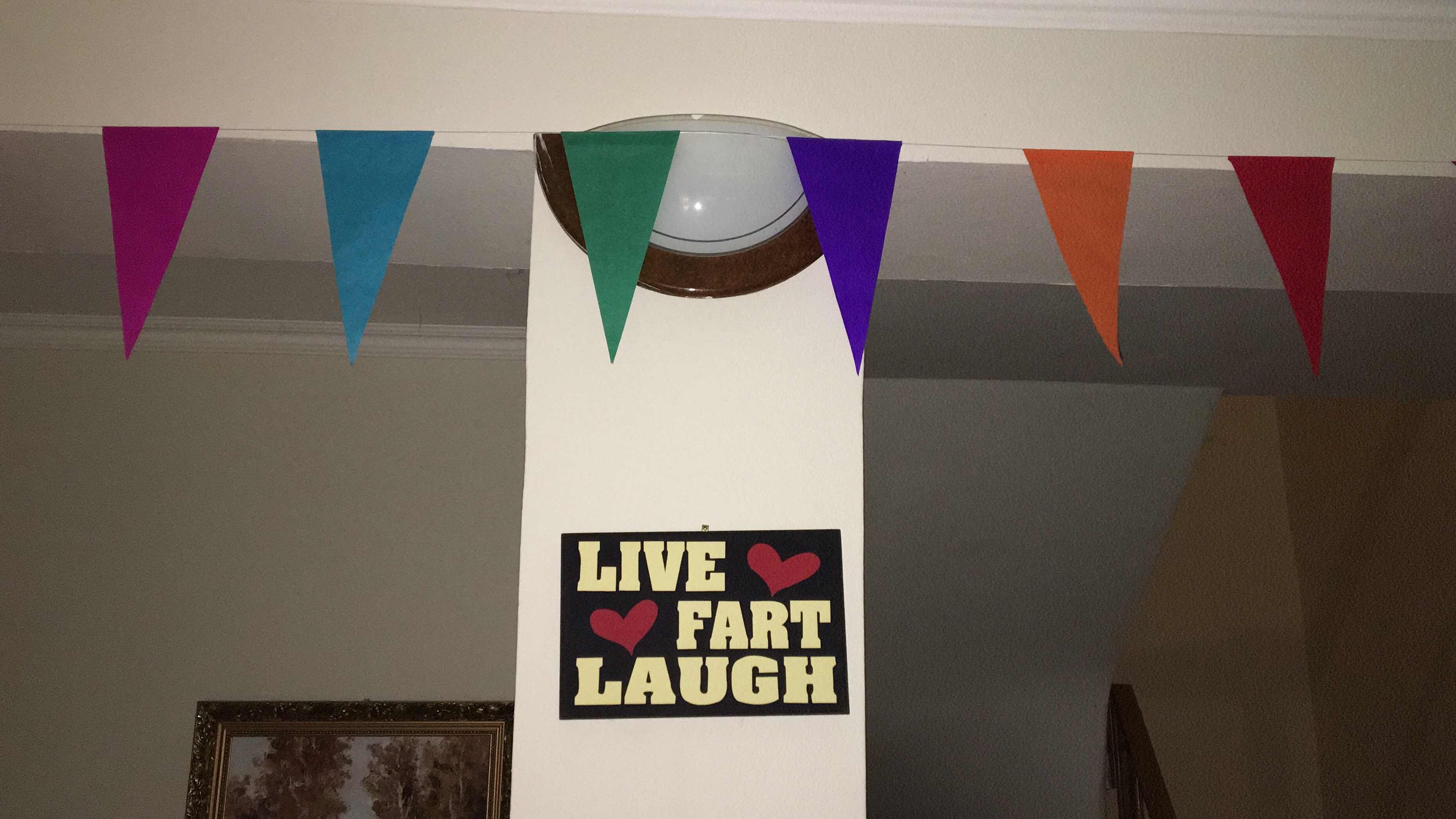 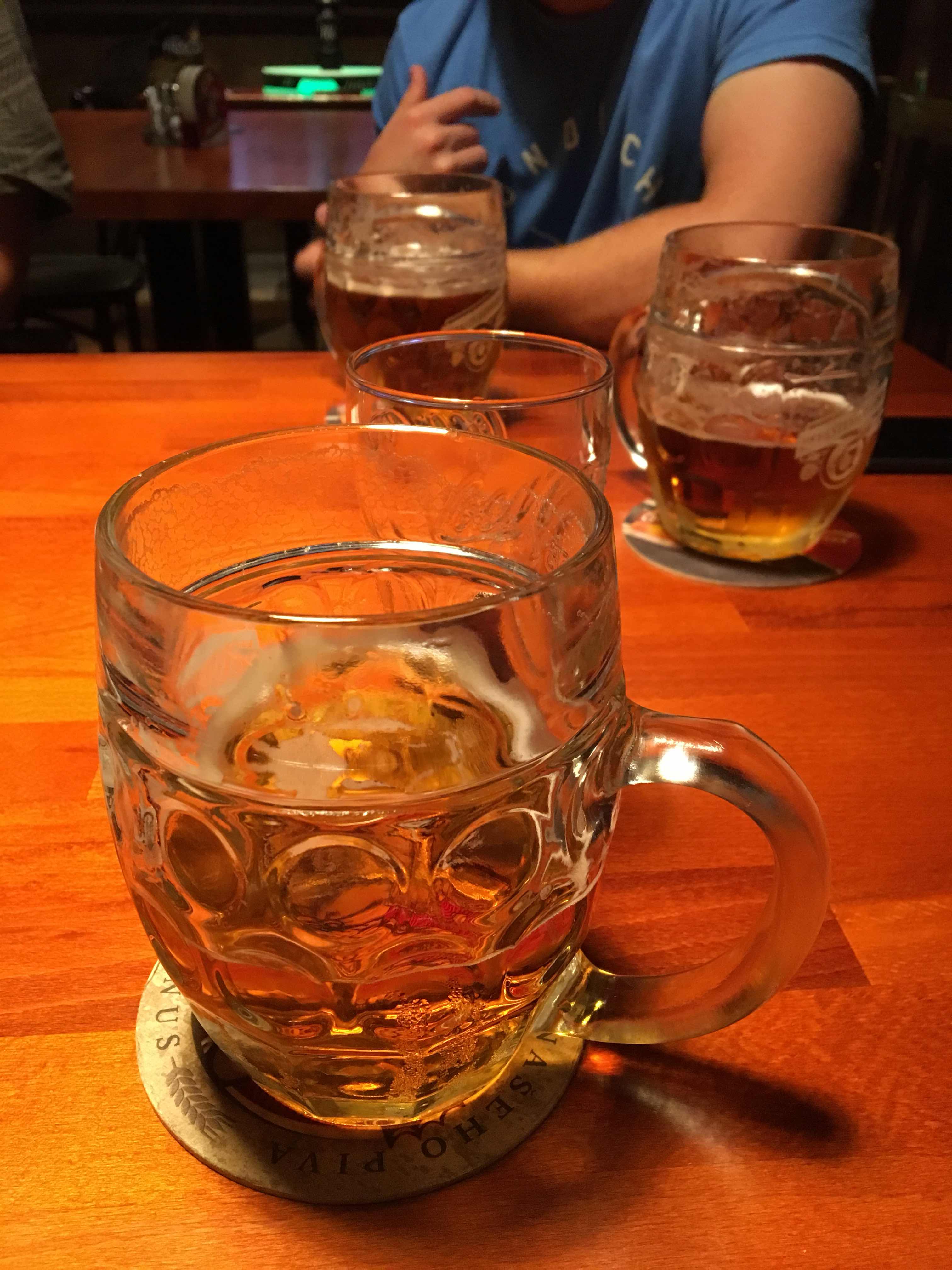 Reeya and Mairi, bae's from the beginning, moved into our house last week. We lived together for three years in dorms so it's been really nice to have them back! 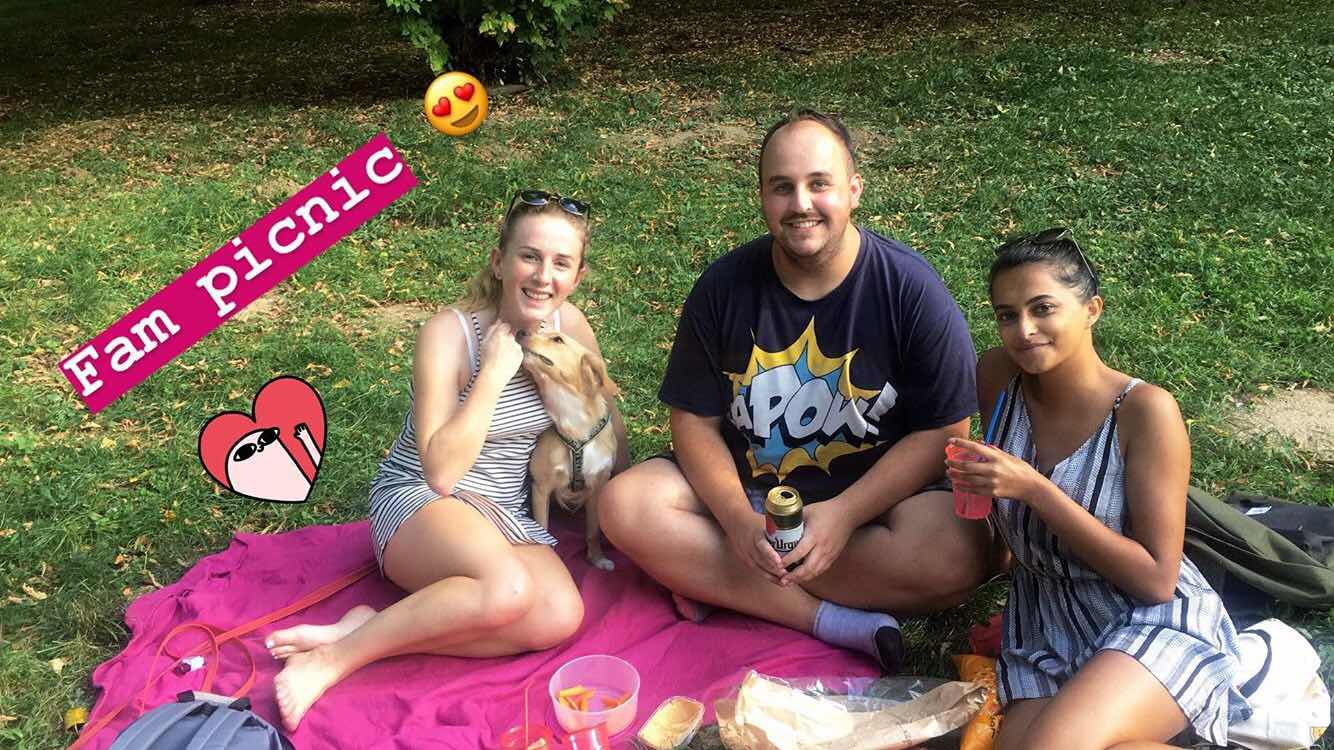