Another 8.30-5 day at Ash End with no Sam.
There waas a new girl in today called Vicky, so she was with me doing some of the jobs Sam would have done. Lois, Alex + Lucy were all there but doing party tours.
We did the goats and sheep as usual, fed the rabbits and guinea pigs, fed the horses with Hi-fi with a bit of water and then did some sit-ons. I had to milk Mary which was really strange + good at the same time. We fed the pigs and piglets with nuts - pelleted feed.
After that we came the ponies + Paddy hay and water + went and did Guinea-Pig Corner grooming. After the 12.30 sit ons we went and had lunch in the cafe - cheese sandwich.
After our lunch we gave the lambs their lunch (a bottle of lamlac) and went and did some more sit-ons.
There are some new turkey chicks called 'poults' in the hatchery which will be raised for Christmas. There were a couple of Silkie cockerels fighting so we separated those and put them into separate pens.
At 3 Vicky + me had to start shutting down the farm! We got the pigs in and gave them all some water, took the Heavy Horses down to the field - 'Stand' means to stand still and stop walking, and 'Walk on' means just that. They're so strong and taller than me, but gentle at the same time, we cleaned out their stables and because it's been really windy, we had to sweep all of the paths around the farm to get rid of all the straw everywhere.
Posted by Lewis at 7:31 PM No comments:

Another day down on the farm ...

I did 8.30-5 at Ash End today.
Sam is ill so when I got out of the car Joan asked if I could do the full day to cover for her instead of working until 12.30, and she is going to pay me :)
I did what we usually start with - the goats, but cleaned them out aswell today.
I went and did some sit-ons which I'm a lot more confident with now because I think Paddy knows me and can trust me, and I trust him.
I've not had anything to do with horses before but I'm starting to really like them. They've got Polly the Sheltand, Dolly Donkey, Paddy, Diamond, the 3 Heavies-Samson, Sarah and Claudius and Thomas the race horse so 8 in total :D
After the sit-ons I went and gave all the pigs some fresh water, and did the same with Doris Dexter the cow.
Mary the goat who's leg I held has mastitus which is like a blockage of the udder. She has to be milked out - until she's empty, and then they put some special udder cream on the udders.
I helped with a chick chat by passing around the chick for all the little children to stroke, and the older chick for them to have on their arm/head. There was a wild duckling running around the heavy horses field so the farm are looking after it. They've put it in the dome brooder to keep it warm. 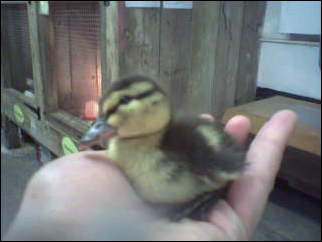 I had to go and get some guinea pigs out of Guinea-Pig Corner and get the children to sit down on straw bales and groom them. After that they all went and had sit-ons on Diamond.
Posted by Lewis at 7:00 PM No comments:

I did a full day at the farm today, from 8.30-5.
I met some of the other staff, Jenny is in charge of the farm during the week, Amy is the same as me + Sam and has worked here for 6 years! and Lucy was there aswell who works on Saturdays and weekdays.
I went and did the usual goat routine - hay, straw and waters. After that I went and collect the eggs from all the chicken pens which will be incubated in incubators.
They have 2 big yellow 'Brinsea' incubators which run every day of the year, and the day that the eggs are due to hatch, they are moved down to the hatchery so the children can watch them hatch.
Joan taught me a bit about incubation, large chickens take 21 days to hatch, and little bantam chickens take 18 days to hatch. She showed me how to candle eggs which was really good. You get a special candling torch and hold it up the the egg and you can see inside the egg! It lets you know if the egg is fertile and if the egg is developing into a chick! Very cool.
I walked the ponies and donkey in from their field with the cow into the barn where the sit-ons are done, then cleaned/poo picked the field. Theres a MASSIVE muck heap at the bottom of the farm where all the cleaned out mess goes onto.
Posted by Lewis at 9:52 PM No comments:

Easter Holidays at the farm

Another 8-12.30 day today at Ash End.
Sam was away ill today so I had to do the jobs on my own which was a bit strange, but she's showed me what we have to do well, so I was ok.
First I did the goats hay,straws and waters, swept the goat building and had to go and do the first sit-ons, I learnt to tie on Paddys lead rope onto the post so he wouldn't run off with a child on his back.
I had to give all the horses hay and water. There are some Heavy Horses in the goat building, Claudius Clydesdale, Lady Sarah Shire Horse and Samson the Shire. Claudius is a bit naughty so his top stable door bars have to be shut so he doesn't bite any childrens fingers, but the other two are really nice. I had to bottle feed Easter which was really good, we used Lamlac, which is a powdered milk substitute which Joan mixed up with hot water.
I went into the hatchery to help with a Chick Chat and stayed in there afterwards to clean out the Quail pens. They're funny little birds and try to fly off when you open their door, but they don't get very far!
Posted by Lewis at 2:00 PM No comments:

I'm back at Ash End again today, Joan is the boss and she asked me to come in and help out. Its Easter Monday and there was a goat kid born this morning which they have named Easter :) and I saw him when he was 2.5 hours old!
I only did half a day (8-12.30) so did the goat waters, hays and straws. The goats have kids which are bottle fed if they reject them, using the mothers milk, so the goats have to be milked! I stood there and held Marys leg while Sam milked her.

There is a black + white horse called Paddy, a little ginger shetland called Polly, a donkey called Dolly and a pony called Diamond who the children can sit on the back of in 'sit-ons'.
I just stood next to the horse while Sam did the sit-ons so I could get used to what you have to do, but Sam showed me how to put a head collar on a horse.
After the sit-ons we went and did a Chick Chat in the Hatchery, I remember coming to the chick chats and singing to the chicks when I was little.
Posted by Lewis at 8:37 PM No comments:

2nd day on the farm

Today was my second day at Ash End and its the Easter Holidays. I got there at 8.30 and met a few new people.
I'm working with Sam the most, shadowing her. She shows me what we have to do, which animals eat what, where all the taps are, who is friendly + who bites/kicks etc.
When we first got there we did the goats hays, straws and waters then swept the paths around the goat building. After we'd done that building we went into the sheep pens and gave them all fresh straw, hay + water.. The goats were really friendly and came over but the sheep just ran off.
We got lunch in the cafe + when we'd done that we had to empty out the duck ponds with a bucket, then filled them back up.
We changed the waters again + swept the paths and that was pretty much it because it took so long to go round the farm getting to know everything. The day went really fast.
Posted by Lewis at 6:28 PM No comments:

2nd Day in a Vets

Today was the 2nd day I've spent observing practice - I got in at 8.30.
This morning I observed consults, and after each consultation I cleaned the consult table which needs to be done so that no germs or bacteria are left on surfaces or equipment. Cross contamination can cause big problems, so it needs to be stopped.
Then I went and observed surgeries - I was shown how to insert an endotracheal tube into a dogs wind pipe (trachea), which is used to give the animal anaesthetic gas. I then got to insert an endotracheal tube into another dog.
I saw an operation on a cats hip which was interesting.
When the cat's operation was finished, straight away a border collie which had been run over came in. It has a dislocated hip and a crushed foot, so the kindest thing to do was to euthanize it.
Another cat was bought in which had to be euthased.
After the rush I cut up some blue surgery cloths and folded them into bags. All of the surgery equipment and tools needed for each operation is sorted out and packed into bags and sterilised in the autoclave.
A cat castration pack contains surgery cloths, all the equipment and tools required, surgery gloves, a mask and surgery cloths.
I left at 7.30, so today was a really long day.
Posted by Lewis at 9:04 PM No comments:

Today was the first day I've spent observing in a Vets Practice.
The place where I went is in Bourneville - about 40 minutes away. I got there at 8.30 and met the Vet Nurses and Vets and then the patients started being checked in.
I saw a few Cat and Dog spays (female) and castrates (male) which are done for different reasons including preventing pregnancy and tumors.

I also looked at the X-rays of different patients and then sat in on the consultations with owners.

Not having one myself, I learnt how to sex a cat today! It's quite easy though.

I saw my first euthanasia - it was a female Rottweiler with a huge bone tumor called an osteosarcoma on her shoulder. I was sitting in the corner while the consult was going on and understandably the family were really upset and loud when she was put down.
Her muscles relaxed after she was PTS so she messed on the floor, I helped Andy the vet clean up, put her into a big yellow bag and then she was sent off for cremation.
It wasn't really what I expected to happen, and it wasn't nice, but I was ok with it.
Posted by Lewis at 7:45 PM No comments: