I've been working with Camels all week and over the Jubilee weekend. It's been a completely different placement to anything I've done before but had great fun doing it.
I've been with Joseph's Amazing Camels in Warwick who have Dromedary (one hump) and Bactrian (two humped) camels which are used in film and TV as well as at public events for camel racing, trekking and camel polo.

I have some experience with horses so knew how to put on head collars and tack up a horse but camel tack was completely different so that was a learning curve! The Dromedary saddle sits over the hump while the Bactrian saddle sits between them; the saddles we use have been imported from the Far East as there is a limited market in the UK! They have all sorts of props and costumes to go on their halters and saddles depending on the theme of the event.
The camels knew I'm new so really tested me, trying to intimidate and growl at me but Joseph said to act confident and they soon calmed down. We gave them a bath last night before putting them to bed in their clean stables and I narrowly avoided getting spat at!

Today we went to Bolesworth Classic - a big showjumping event. The camels raced in the main arena with our jockeys doing some showjumping before the famous jockeys and main show sponsors got on and had a go racing.

Oliver Townend and Dave Quigley on the camels: 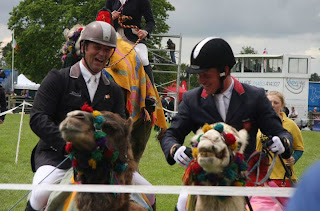 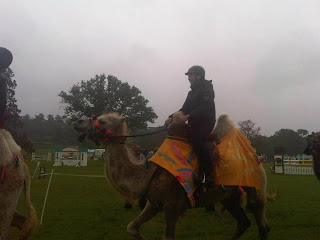 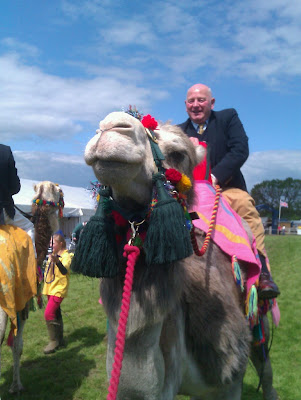 and Geoff Billington even had a go! 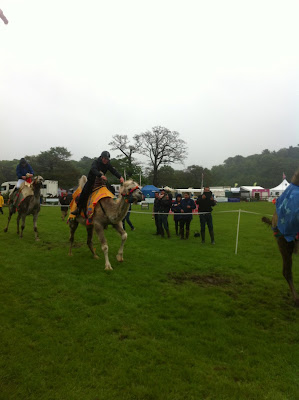 I have been staying with Joseph & Rebecca and their family have a cottage which they rent out so I have been staying in that for just over a week, working in the days and eating with the family of an evening.
In the past, before the camels, Joe & Rebecca kept lions for a circus and told me all sorts of stories about them, their training and the places the visit which was fascinating. They gave them up over 10 years ago before their children came along.

Last weekend we went to a festival in Aberdare (Wales) and took their team of Racing Pigs. I had the glamorous job of dressing up as a typical West Country farmer to start the pigs off and run behind them to stop them going the wrong way.
Also at the festival were Dick & Dom and entertainment from X Factor contestants, Only Men Aloud and other local acts!
Posted by Lewis at 3:37 AM No comments: