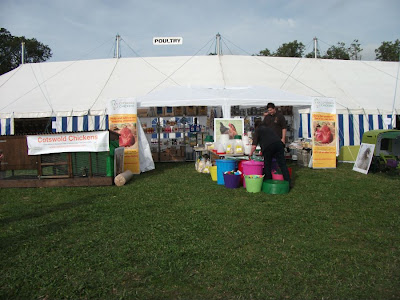 Have been in Moreton In Marsh this weekend - chickening again!

Working for Jude again, on the Cotswold Chickens stand :)

Up early to get there. Luckily they'd already set up the gazebo, shelves, housing + things yesterday, so we had to just had to put a few bits out, sort the eglus and cubes, install the chickens and go! 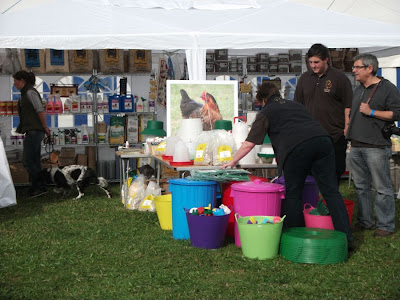 Was on the stand with Jude, Anthony, Clare + Rosie. We had a proper card machine this time which worked really well. 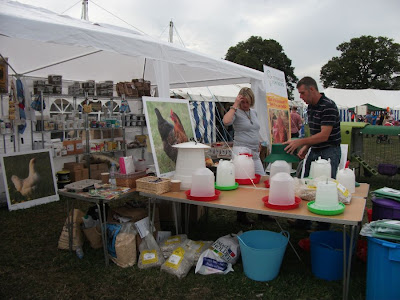 Really different products were selling compared to Thames - these were proper chickeny people. We were busy all day though and took a load of orders, which is always a good thing. Nice to see people interested in keeping chickens!

Had a huge brown t-shirt with the logos on ... looked like a dress on Clare! :P

Have a chest infection + on antibiotics, so shivering + then burning up all day, but was still good - think we need a chair at the next one though!

There was a poultry tent + show there, right behind us. Alice (my barred wyandotte)'s sister placed in her class! :) Tasha, who she's from said Alice is better, but has the wonky toe!
My Cream Legbar boy went to his new home too. Pre-arranged to meet a lady there so she came and collected him + hes gone to live with her girls :)

We saw Alex James from Blur there, he came over and said Hi, said he was interested in getting an eglu so gave him a brochure. We recognised him but didn't realise who it was until someone said!
Posted by Lewis at 9:49 PM No comments: