Lino came into the ITC having been inappetent for several weeks, we found he had a severe chronic anemia with his Red Blood Cell count being a fifth of what it should be. 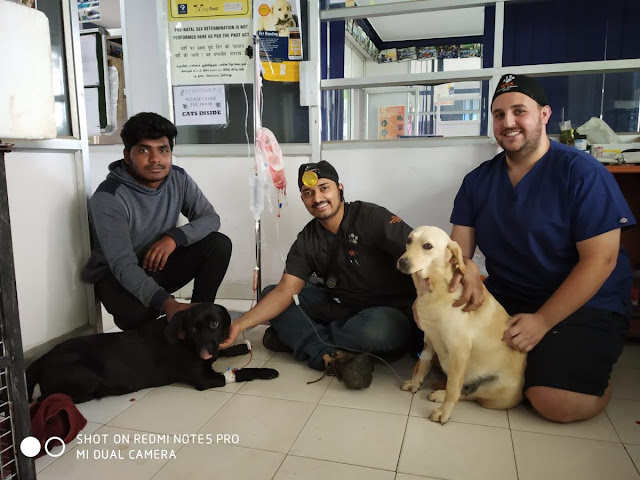 His owners had another dog, who was used as a whole blood donor alongside supportive therapy thanks to donated transfusion sets from the USA. 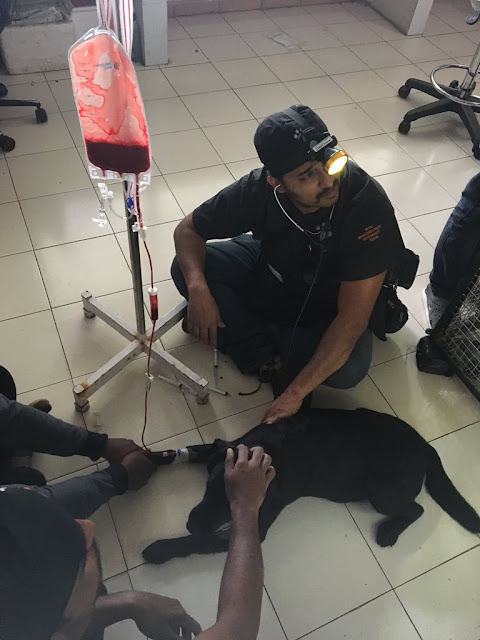 Dogs can be given a first time transfusion safely without being blood typed, but second transfusions must be matched for reactions 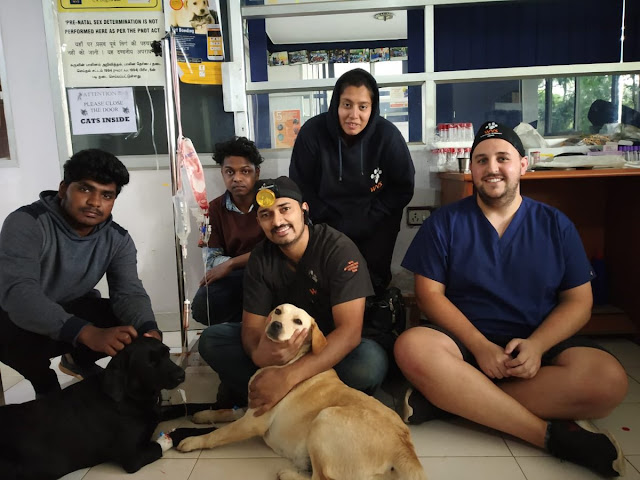 It was time for cake again at the WVS ITC Ooty yesterday as they achieved another massive milestone - their 25,000th neuter surgery! 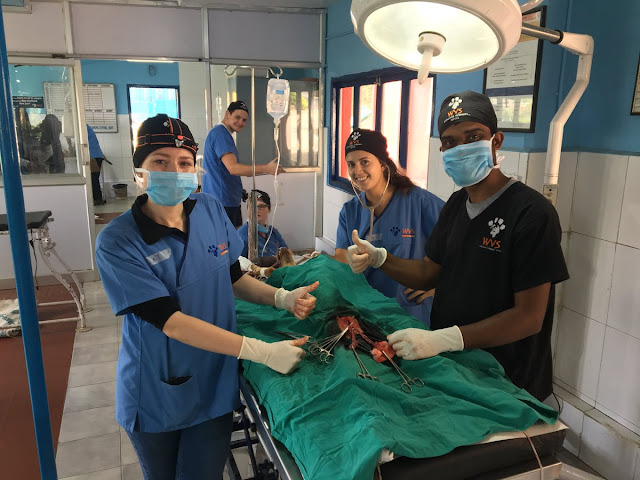 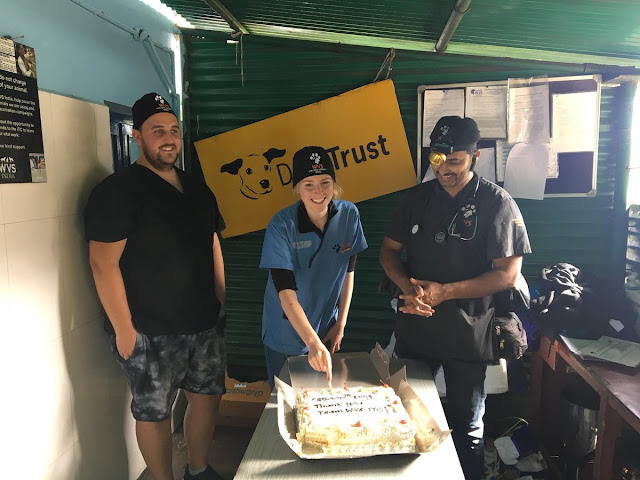 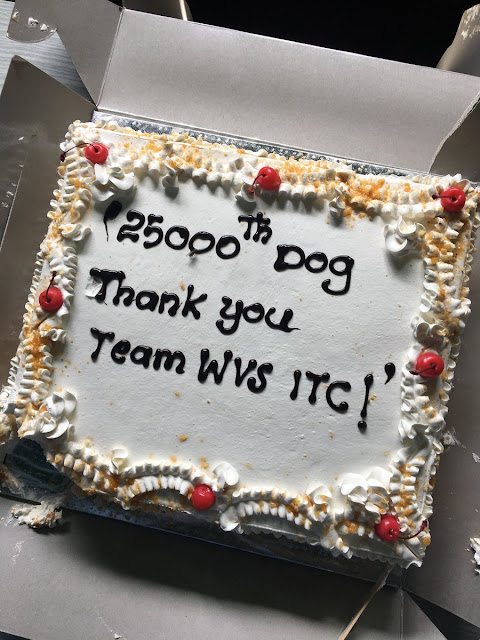 After a quiet day we went down to dinner at 8:30 and as we were walking past we noticed there was a case in the clinic so stopped to see what was going on. A young Rottweiler presented collapsed with acute abdomen screaming in pain; the owners said it started today...

We placed an IV to put him on fluids and do a clinical exam while the vets took a history in Tamil language. He is regularly fed chicken bones, was straining to pass feces and had vomited so due to the acute nature we suspected he had a foreign body or GDV.

X-rays were taken which didn’t really show anything (but useful as it ruled out a GDV) and an abdominal ultrasound was also unremarkable except for a small spleen. After strong IV pain relief he was still screaming in pain so the decision was to take him to surgery for an exploratory laparotomy. 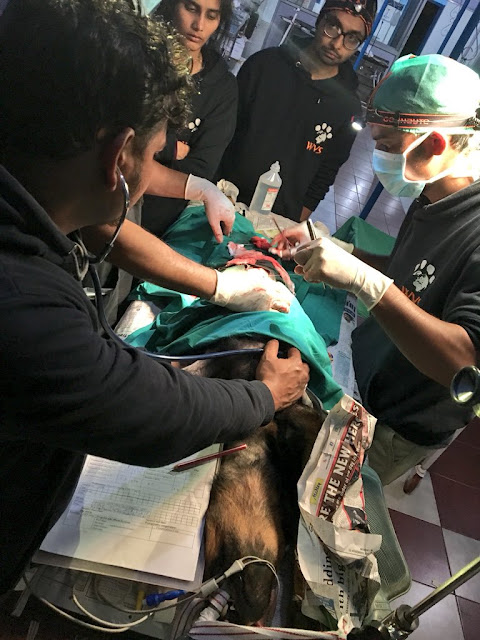 The team rushed to get everything ready including kits and warm fluids but the ex lap showed he pathology on liver and spleen; both were pale and discoloured. 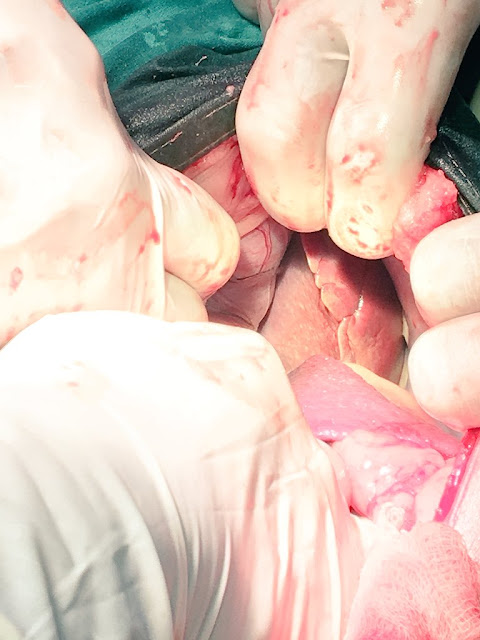 Vinay scrubbed out to speak to the owners and advice of a poor prognosis, especially given the limitations of being a low resource charity. The owners elected to close the abdomen and try medication but saw how much pain he was in after recovering from surgery, despite strong pain relief, and sadly he was euthanised.
Posted by Lewis at 4:30 PM No comments:

The first surgical group and my uni friends have finished their course and left the ITC today, most of them are going travelling around India (and Thailand) while a couple are heading back to the UK for their first vet jobs, which means I’m ‘on my own’ for two days until the next group arrive.

This morning I did kennel rounds with two of the vets so we checked all the inpatients which had surgery yesterday, gave them wound and pain scores, then pain relief (melox) and rabies vaccinations.

After rounds we had a few emergencies come into the clinic, one being a terrier who’d been attacked by a wild boar. 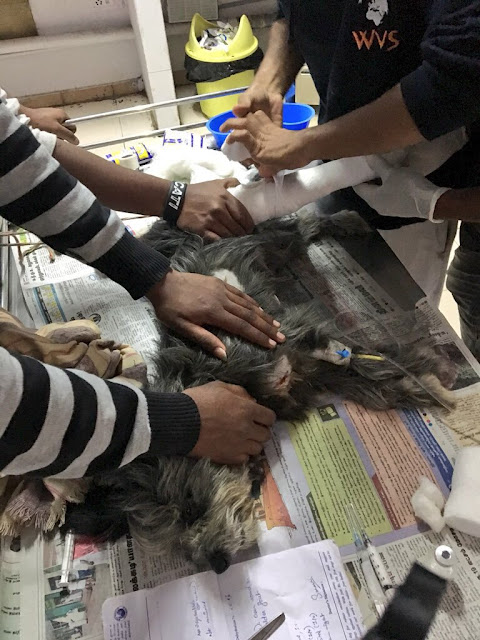 He had deep wounds and an open tibial fracture so we placed a catheter to give fluids in case of shock and pain relief. The leg was x-rayed and immobilised with a splint until possible surgery on Monday.
Posted by Lewis at 4:19 PM No comments:

Renu does an amazing job of catering for everyone at the ITC, course participants and staff, making sure everything is washed in bottled water and not too spicy for us! She gradually increases the heat throughout the course and there's always something new to try.

On the last Friday of the course we had a cooking class where she taught us to cook our favourite dishes we'd eaten during our time here.
My absolute favourite is Gobi Manchurian (dry) which is made out of cauliflower and basically tastes like chicken nuggets! We also made Dal Fry, Dal Makhani, loads of bhajis, paratha and chapati. 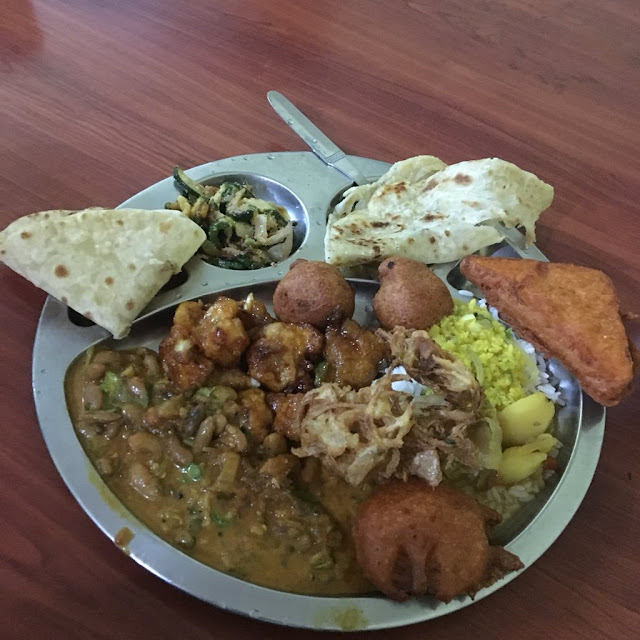 It all tasted amazing and I can't wait to cook some when I get home.
Posted by Lewis at 4:09 PM No comments:

I've been lucky enough to do lots of surgery so far including lots of cat castrates and many neuter surgeries on dogs, but never done a cat spay so this seemed like a bit of a milestone.

Unfortunately an Indian politician died yesterday so the roads are closed and the boys were unable to go and catch or release dogs, so we were given owned cats to neuter.

As with all other surgeries, the cats are given a premedication, an intravenous catheter placed for induction of anaesthetic and perioperative fluids. Here she is after being clipped and just waiting for a surgery table so she can be scrubbed.
It gets pretty cold in Ooty so you can see the hot water bottle which has the iv line running under it to to keep her warm, and the hair drier which can be used in recovery to warm them up. 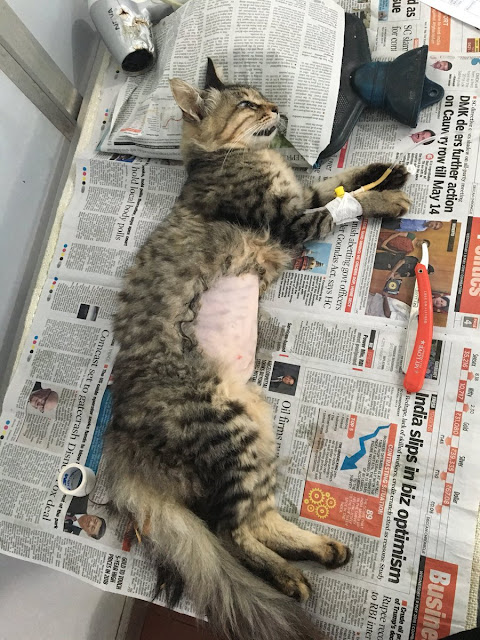 I took a midline approach and opened the abdomed, searched for a couple of minutes and couldn't find her uterine horns or ovaries. We checked, twice, to make sure she wasn't a male so the supervising vet stepped in to find the uterine horns, which he was unable to do.
Another vet scrubbed in to check, and another, who were all unable to find them! Eventually we found a cervical stump which would indicate she had been spayed before but as there was no midline incision scar and her eartip was not clipped, she must have been done flank and by someone else.

All very odd but I closed the abdomen which was good practice and will wait for another opportunity for my first proper cat spay!
Posted by Lewis at 3:53 PM No comments:

Up bright and early on Saturday morning, we left the ITC at 6am headed for Kotagiri for a Rabies vaccination drive. We split into three teams, each with vets, vaccines, educational leaflets (in English and Tamil) and most importantly a team of expert dog catchers and their nets.

We went through villages on foot vaccinating dogs, most of which are free roaming but some are owned so their owners showed us their dogs and were given vaccination cards. 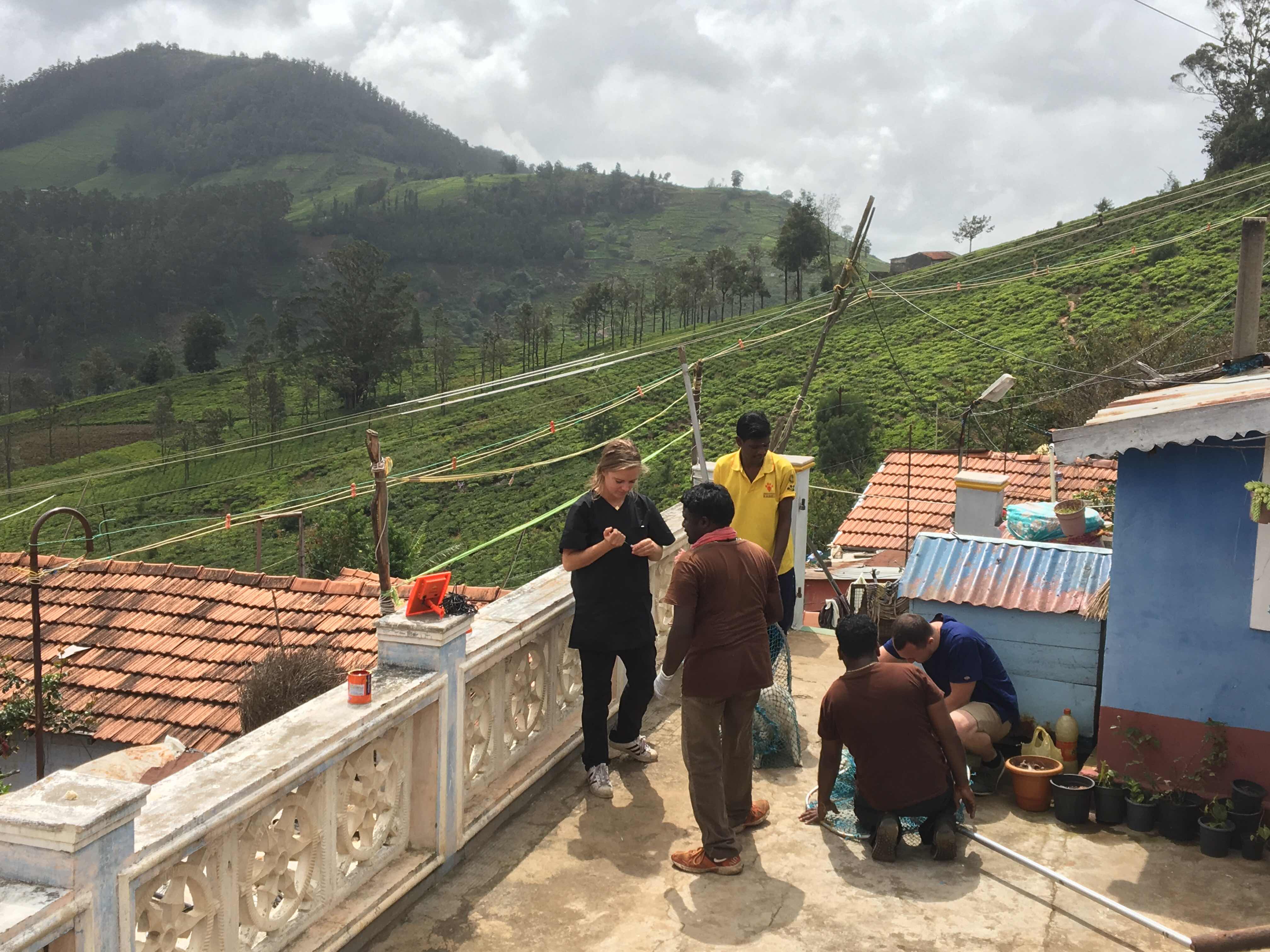 It was quiet an operation as we had to find and catch the dogs, load vaccines and get them to wherever the dogs were caught, then those vaccinated had to be marked with a paint spot so they weren’t re-vaccinated and all vaccines were recorded in the Mission Rabies app which adds them to a map with the age, sex and neutered status of the dog. 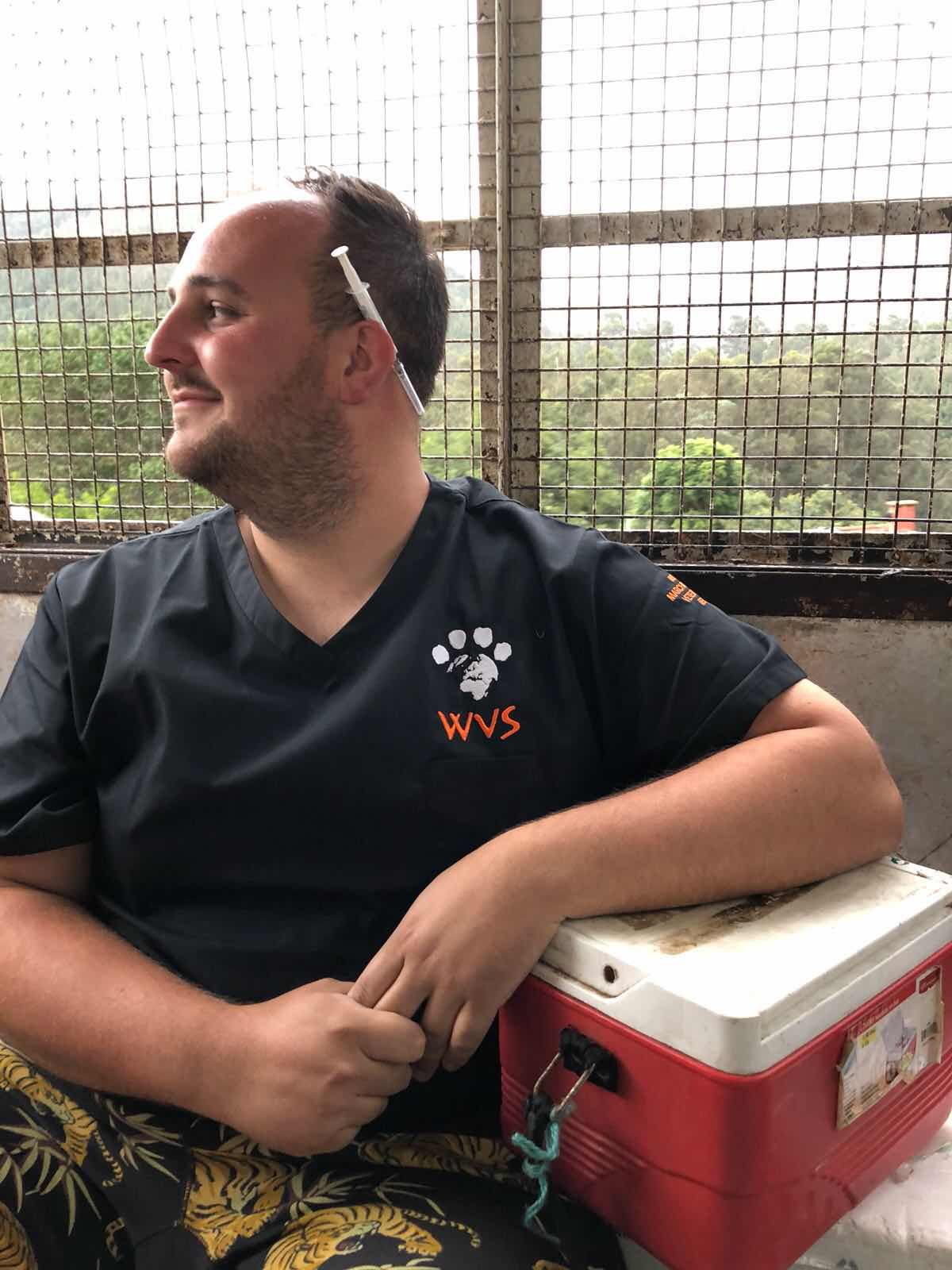 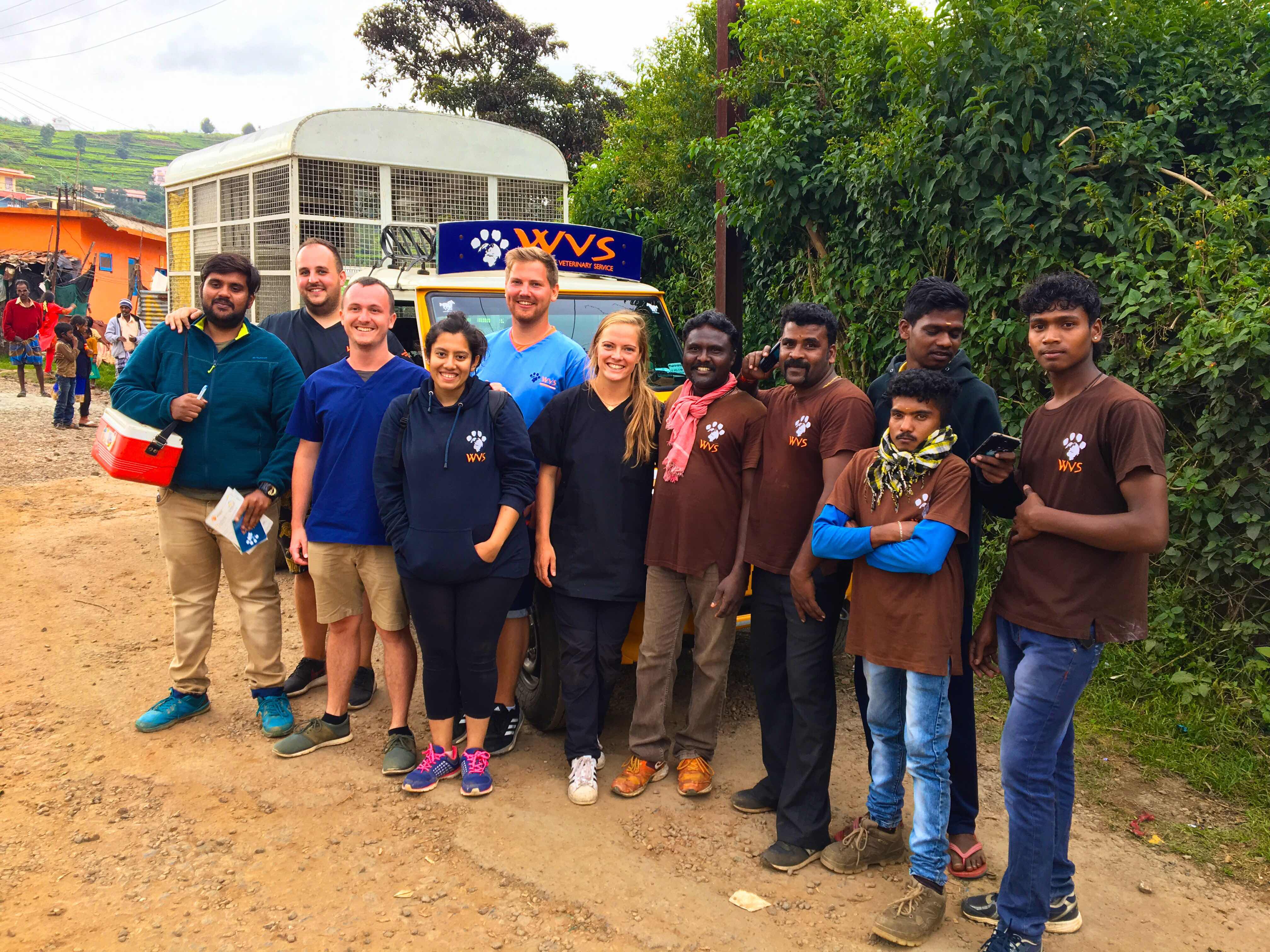 I was sat watching my dog recover post bitch spay when a goat walked past the window coming in for a consult.

Life is never boring at WVS India!
Posted by Lewis at 3:49 PM No comments: