Quite a rainy day at Ash End today from 8.30 until 5.
I got there and helped Greg (Joan + Bob's son) to clean out the pigs and change their waters. After I did that I went and did the goats hay, straw and waters. The hay from the hay racks goes to the cow and straw goes and beds down the ducks. I had to get rid of all the soggy wet straw from the duck pen because of all the rain and put the new stuff in.
After that I bottle fed the cade (orphaned) lambs and then went and fed and watered all the horses and ponies with Sam.
We had lunch at 12 and did some sit-ons at 12.30, I had Paddy :D + Sam had Dolly - she bites and kicks if you go behind her, so have to be careful!
They got a big drainage company to come and empty to main duck pond with a big lorry and a tube that sucks up all the water, but the bottom was covered in mud and stones so we had to get in and sweep it all out to get it clean. After that we changed all the sheep and goat waters so the duck pond could be filled up - its quite clever because on one side there is a pipe and box, so you pour the water into the box and the water goes into the pond and and straw and hay stays in the box.
I had to carry the cade lambs into the hatchery for Emma's tour so they could bottle feed them, and then it was time for more sit-ons, this time we swapped and I had Polly. We fed the horses again and after the last sit-ons it was time to leave.
Posted by Lewis at 10:59 PM No comments:

8.30-5 day at Ash End and Sam is back :D Vicky wasn't there so I'm not sure if last week as a bit too hectic for her!!
We did the usual sheep + goats hays, water and straw and then went and gave the pigs some water. We did the morning horse sit-ons and after that I had to go and clean all the horse tacks and tidy the horse feed store because theres a Shite Horse day on Monday. It took ages to do with a damp cloth because it was all thick with dust and mud and they are really detailed.
I learnt where everything goes on the horse. Me + Sam went round to feed and water all the horses.
We had lunch, did some more sit-ons and took out the heavy horses, I took out Samson :) After that we did a big clean out of the stables and made them all fresh so they look good for Monday - but I'm sure they'll need doing again tomorrow! 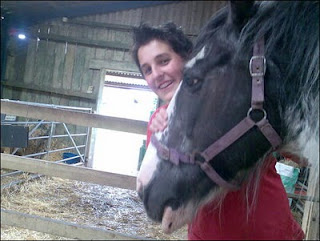 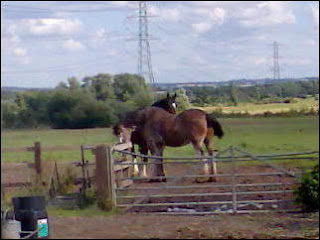 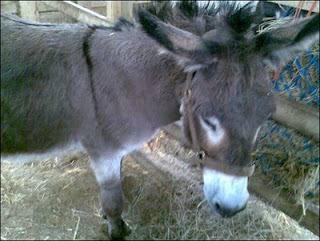 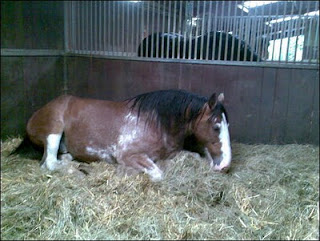