Sophie my friend and flatmate has never been Lambing before and so have been teaching her how to lamb!

This was a Welsh Mule twin who I think had already had her first lamb. She took about half an hour to have the next lamb so we turned her over and checked that everything is alright.
It depends on the farm and the farmer as to how you'd go about things next - sometimes the farmer will see how the ewes go but Richard would rather we intervened and pulled every lamb so that there aren't any problems with the birth.

Sophie checked the lamb was coming in a diving position - 2 legs pointing forwards and a nose following along behind. 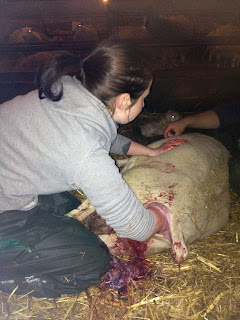 They were so she pulled the 2 legs with contractions... 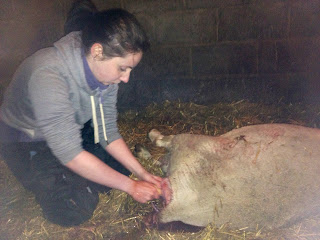 ...until they extended, were both out and the nose was nearly out of the vagina... 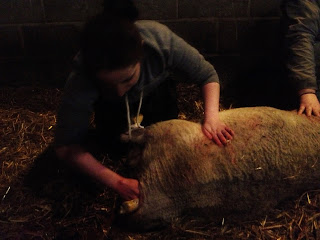 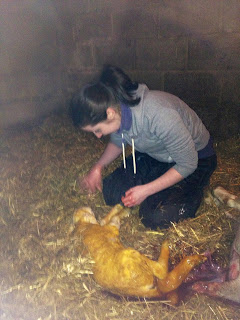 A mahoosive lamb!
It's covered in yellow Meconium which shows that the lamb was stressed - we were right to intervene and pull it as it was obviously distressed in the womb. 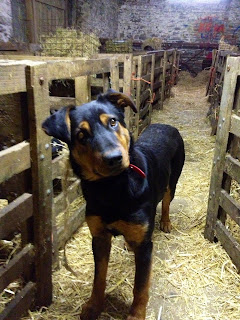 Aberystwyth, Wales, and I'm back Lambing again for 2013 and LOVING it!

We started in the second week of February so have done a few nights already - am doing 3 or 4 nights a week for Richard and then will start the Uni farm in a few weeks!

This year the girls from last year aren't coming so I have a few new friends coming along who've never need lambing before so am teaching them the ropes! 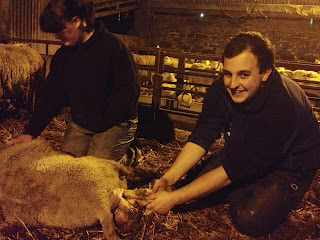 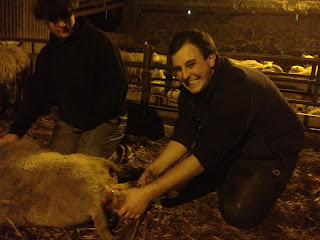 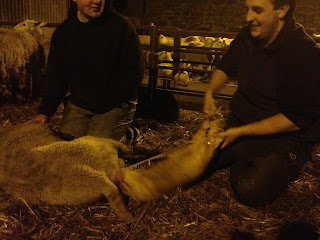 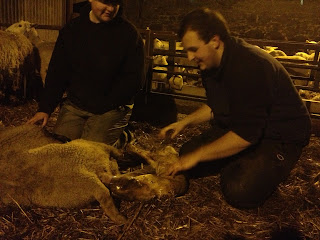 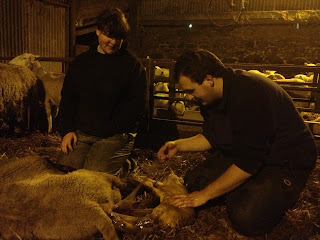 Wiped the gunk away from his mouth and he was up and running around in 10 mins!
After this we'd give him Spectam (a scour halt) and spray a strong Iodine solution on his navel to stop infections trafficking up it and to stop joint ill.
Posted by Lewis at 12:38 AM No comments:

Teaching Daf to jump on the beach

We've been on the beach all afternoon teaching Daf how to jump!

We started working with him in October and he was pretty uncatchable and unhandlable so now he'd backed and jumping its awesome!

We started off walking him over a line in the sand, then a stick, a few stones etc and worked it up to this - he'd jumping really well now. 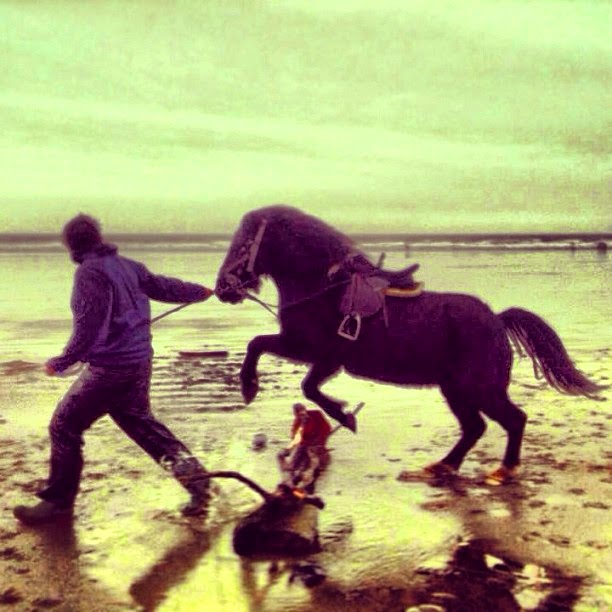 Not sure who's having more fun - him or me but thank god for my waterproof trousers.
Posted by Lewis at 11:49 PM No comments:

Getting Daf used to water

Now that Daf has moved to Livery he's literally a 2 minute walk to the beach so we took him down earlier to get him used to water and the pebbles etc.

He's lived in a kind of marshy field before so has met puddles but I think it was all a it different being led in with a bridle on. He did really well though and the curiosity got the better of him! 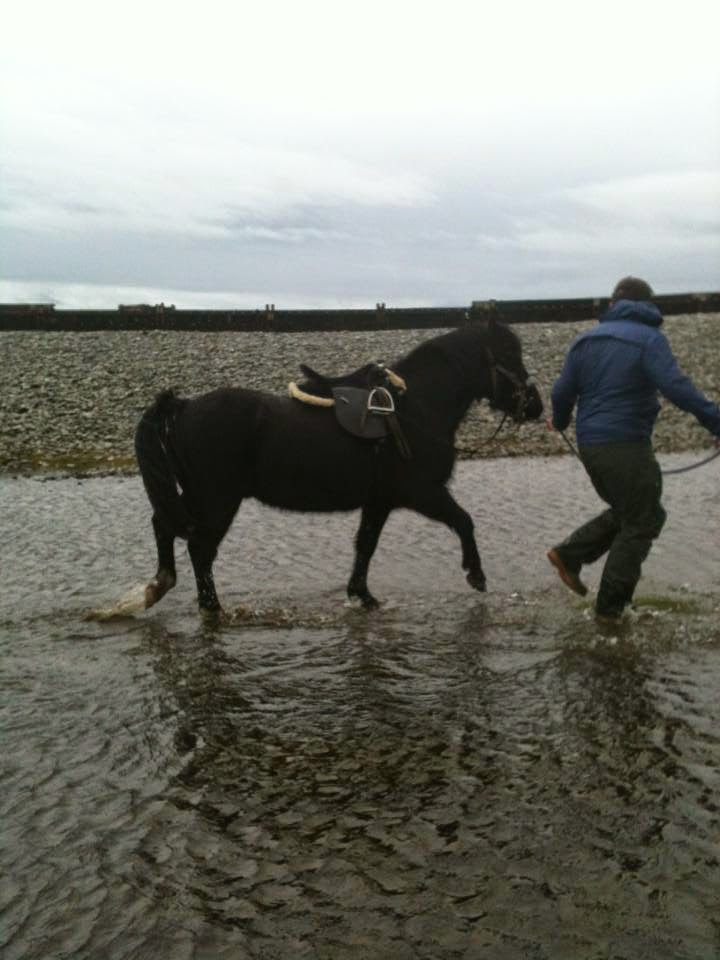 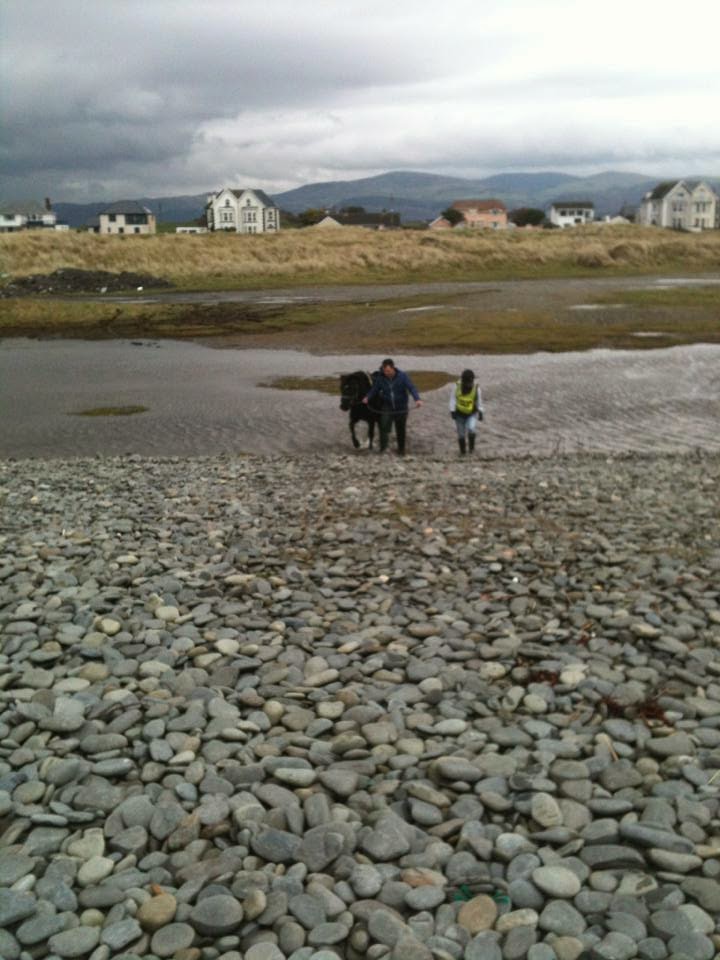 We moved Daf from his field with Tinks and Flos to livery with his owners other horse, a couple weekends ago and have been going up getting him used to being stabled as he's never been in before.

When Amanda asked us to move him we expected to be loading him into a trailer but when we turned up she was there with two high vis jackets for me a Victoria and she asked us to walk him.

She said it shouldn't take long but after she explained where it was it sounded quite far.
It took us two and three quarter hours walking in the pouring rain to get him there.

Anyway, he's pretty cheeky and has been drinking from the hosepipe as we've been trying to fill up his bucket... 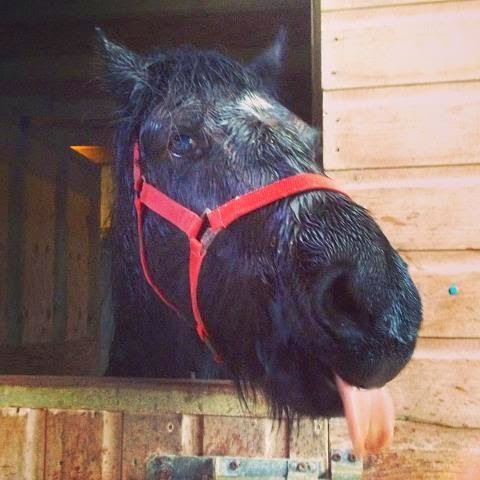 I'm really looking forward to another season of Lambing!

I have the new job at the Uni farm which I think will be about 6 weeks split between me and Cody - not sure if we'll be in pairs, on our own, or what yet though. At least at the Uni farm there's somewhere warm to sit and do Dissertation work, if we're quiet with the Lambing!

Richard from Glanystwyth rang me a few weeks ago to ask if I could go Lambing for him again this year. It'll be 3 or 4 weeks of 9pm-6am which is quite a lot when we have lectures and Uni too.
I asked the 3 girls who have come for the last 2 years but they didn't want to come 'cos of Uni etc which is fair enough. A few other people on my course want to come this year but have never been Lambing before, so it'll be really good to have help but will need to help and teach them how to Lamb too...

I thought about it and can't do 7 nights a week this year so said I'd do 3 nights - which is awkward splitting it when 4 people want to come with but it'll be fine.
He won't want 5 of us there every night ('cos its usually just 1 person) and I can't afford to split the money 5 ways and do it for £1 an hour or I'd rather stay at home in bed! :P So I've said I can give lifts to save £20 taxi's and will buy them waterproofs etc.

The 2 farms are so completely different...First the Uni farm is a modern, almost clinical, performance-recorded system where we don't pull much and have to measure and record every detail for research: 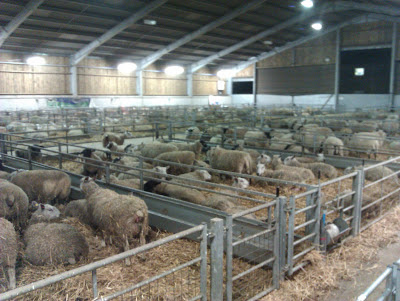 Then Glanystwyth is a traditional Welsh farm with a massive shed with 1,200 Organic ewes and lots of little barns with lambs in: 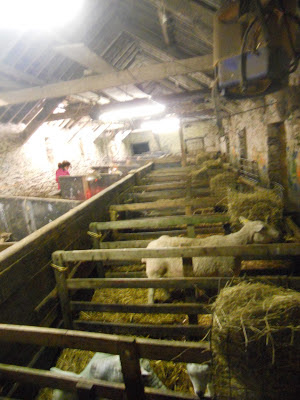 Not sure when Uni start but Glanystwyth start in 2 weeks! :)
Posted by Lewis at 12:00 AM No comments: