Last year at Diakovce we met a group of Dutch falconers who we got on really well with and stayed in touch. They invited me and Leah to stay on after Opočno to join them for three days at a private hunt in Brno with their four Golden Eagles and a female Goshawk. 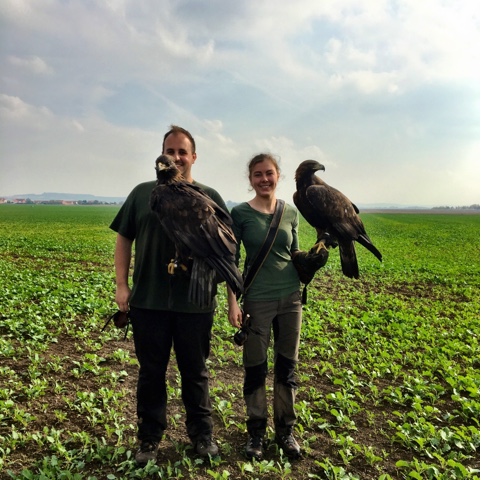 There was a bit of a hiccup leaving Opocno as the girls locked the key in their room and we had to leave at 5am for them to catch a train back to Kosice so I drove them the three hours to Brno while Leah stayed behind to get their luggage out of the room. We got everything sorted, found our hotel and perched the birds out in the gardens.

We were hunting on land around Brno airport and I've never seen so many hare in my life, the game was fantastic. Leah was flying a male Golden Eagle given to her by Bart, one of the Dutch guys.

They had a lot of slips on game as she got to grips with flying him and that evening they did some lure work by dragging a deer skin behind the truck - amazing to see!
On the second day together she caught a hare with him and once he was blooded (caught something) she was able to give him a name; Maximus. 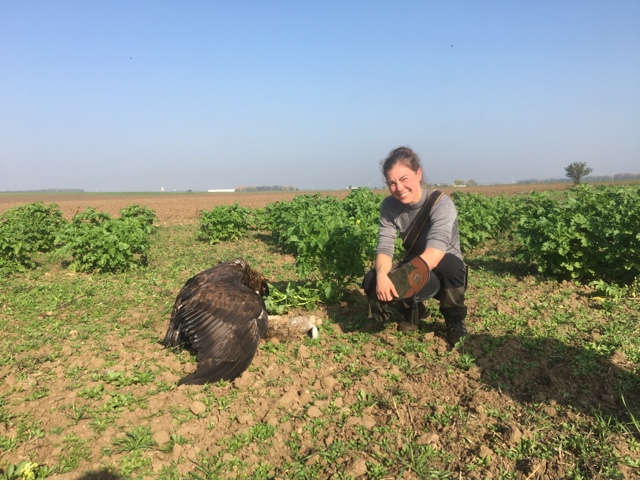 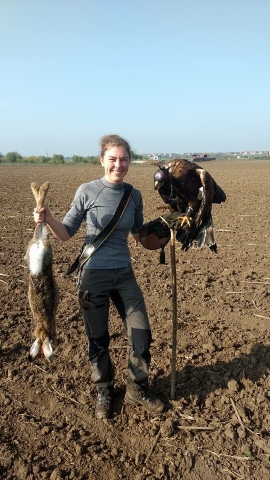 Wes has been trying to catch Hare with his female Goshawk Elsa for two years but not had the opportunity. As there were so many hare in Brno and having flown hard for the past few weeks Elsa was at the perfect weight and fitness and had an amazing flight.
It's not a typical Gos flight so she obviously learnt how to catch it and it all paid off - Wes was delighted! 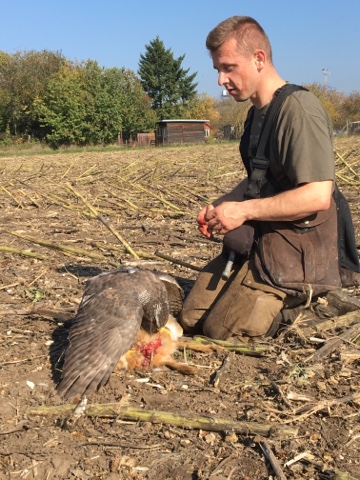 I really had the best time getting to know the guys and spending eight days with them I learnt so much about eagle falconry. The falconers so in touch with nature, know so much about the land and respect the quarry we're looking for. We saw loads of Roe Bucks (males) but didn't fly on those as they're out of season.

I was happy as they know I collect animal skulls so we found a complete Roe Deer female so I took her skull and cervical vertebrae. We also found a dead Buzzard underneath some electricity pylons which I've put in the freezer to process at a later date. 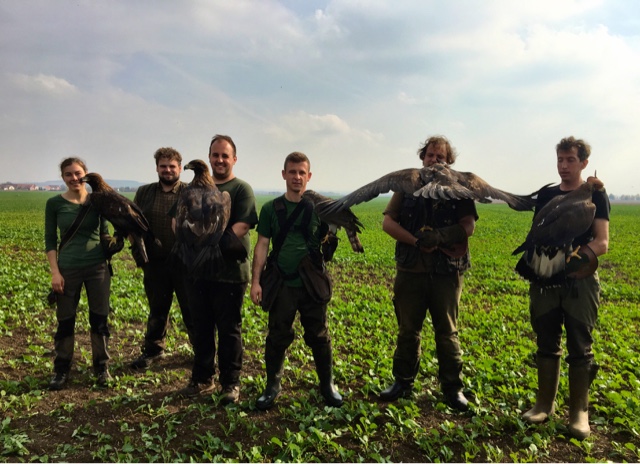 Four years ago I'd never seen an Eagle up close outside a zoo and now I've just spent eight days hunting with some of the finest eagle falconers in the world, helping make and fit equipment and handling the birds on a daily basis. I know it's cliché but I wouldn't change my life for the world.
Posted by Lewis at 9:23 AM No comments:

This week I travelled to Opočno in the Czech Republic with four friends for the 50th International Falconry Meet. We drove the seven hours from Košice on Wednesday afternoon, ready for registration and the first day of hunting on the Thursday.

The opening ceremony was held in the castle and amazing to see how many falconers and birds there were in attendance with 67 Golden Eagles and a whole lot more Falcons and Hawks on top of that. 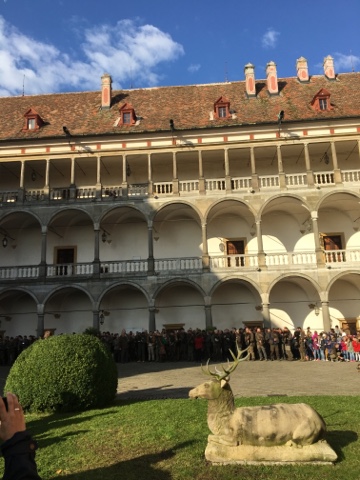 It was great to catch up with friends we've made at previous falconry meets and to make new contacts.

We spent two days with the Golden Eagles and one day out with the hawks; Goshawks and Harris' Hawks. 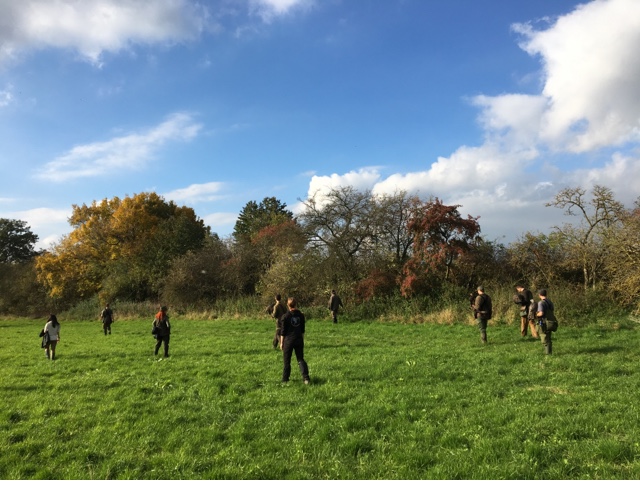 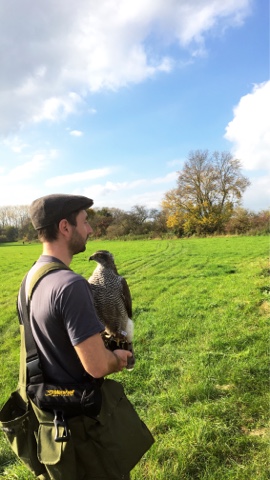 Bart, a Dutch falconers and friend of ours, brought his new male eagle for the meet and on their first day out hunting together they caught a Roe Deer. 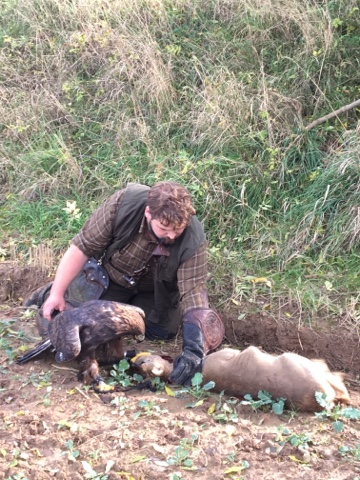 It was an awesome flight as the eagle locked onto the backend of the doe and she ran around a tree trying to get him off. He had several flights leading up to it but to hold on gives them confidence which is great for training young birds.

At the end of each day we had a ceremony to pay tribute to the game, a tradition which is still carried out with horns playing, a small fire and pine branches put into the mouths of the game. 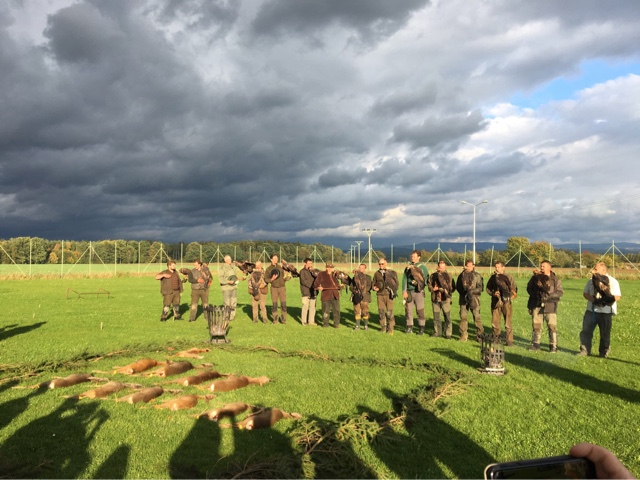