Anatomy; Muscles of the Limbs 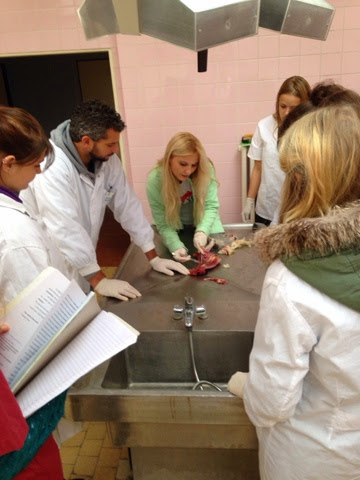 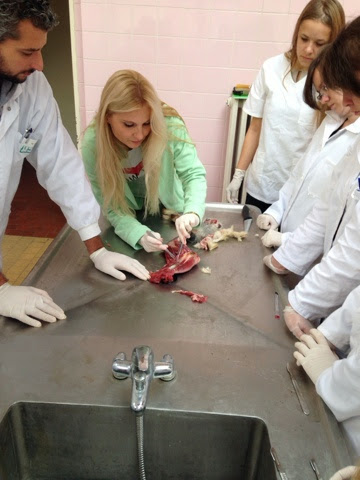 Anatomy; Bones of the Face

Got an A in Anatomy again this week; bones of the face. 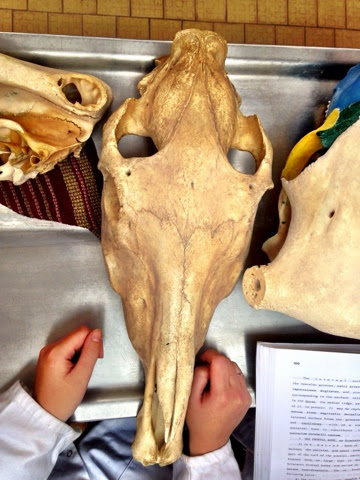 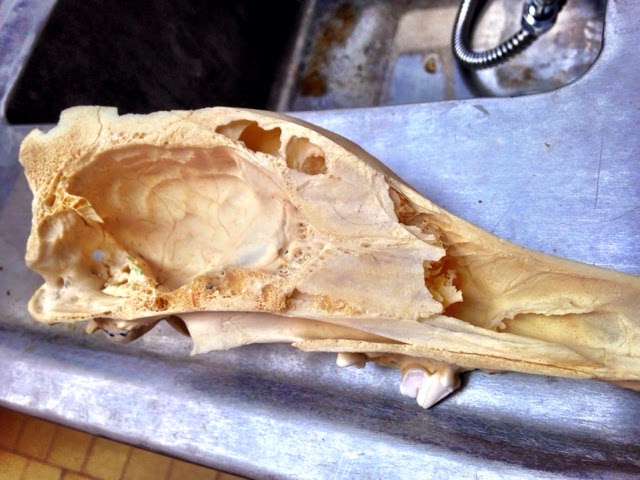 Very happy with that and now (in theory) we know all the bones of 5 species! :)
We move from bones on to muscles next week - muscles of the thoracic limb! 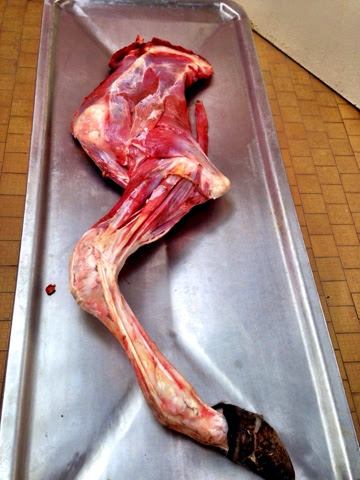 We don't really use any textbooks here, this semester anyway, as the professors and lecturers write course specific textbooks for us that they sell for about €3.

It works really well when they're going through lectures so you can follow what they're talking about and if there's a bit of a language barrier with what they're trying to say, you can read the book which usually explains it pretty well.

I was in the library and spotted this book in the glass cabinet for €1.33... 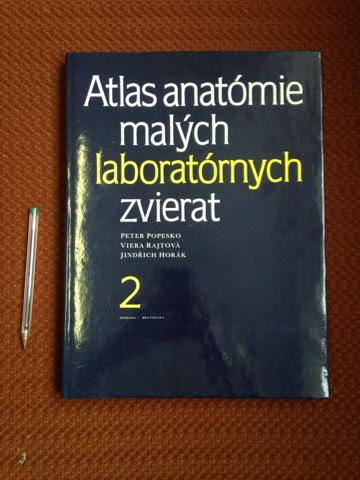 It's a Slovak book but the English title is Atlas of Anatomy of Small Laboratory Animals 2.
It doesn't really matter that it's in Slovak because all the figures are labelled in Latin which is the language we learn all our anatomy in anyway! 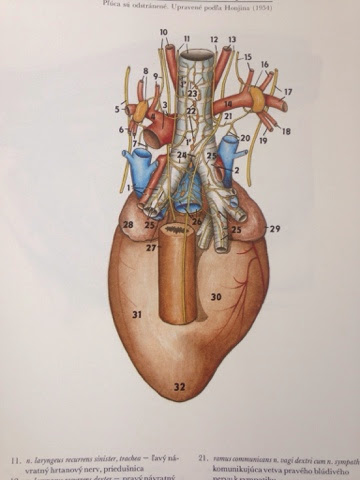 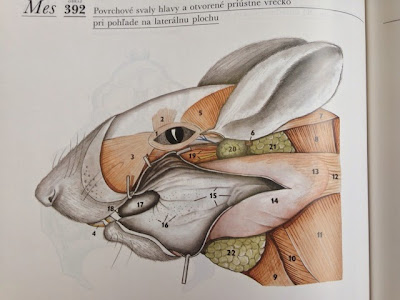 Nom idea why they were so cheap and there was an Atlas 1 book to go with if but they'd sold it and I got the last copy of book 2!

This afternoon, straight after our Physiology exam, we went on a field trip to the University Dairy farm.
It's a 45min drive outside of Kosice and although the bus was something out of the 1950's the view was really nice.
They have 410 dairy cows in lactation so a decent sized farm.
They made us put on lab coats, wellies and hair nets (not typical dairy farmer attire) and showed us around the farm, the parlour and the milk room.
I was impressed with the parlour but the milk room could have done with several improvements... It wasn't the cleanest and the floor was broken etc but that's why we were there, to 'inspect' the hygiene of the place.
Afterwards they took us to see the young calves... 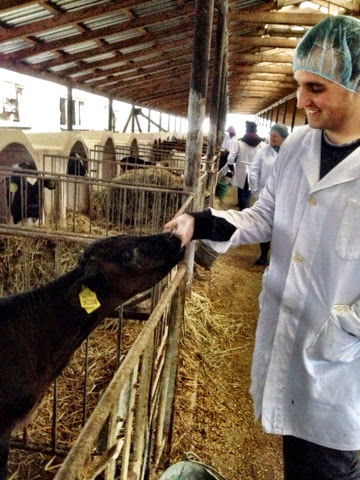 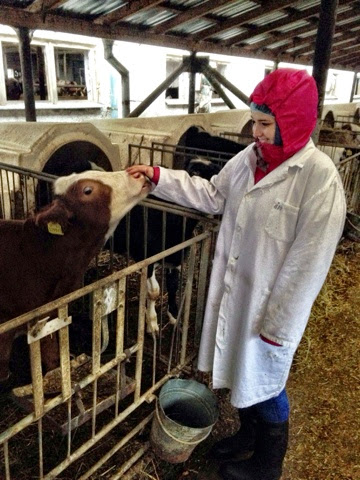 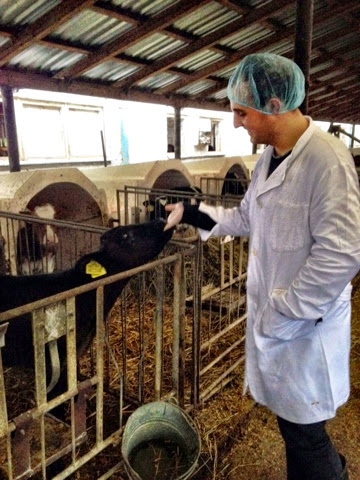 Very cute!
Apparently we'll be back again to see the other animals with different modules and might have to come back to stay over for calving which would be really good!
Posted by Lewis at 9:24 PM No comments:

We had our Matriculation Ceremony this afternoon which is the formal process of entering the university and becoming Vet Students. 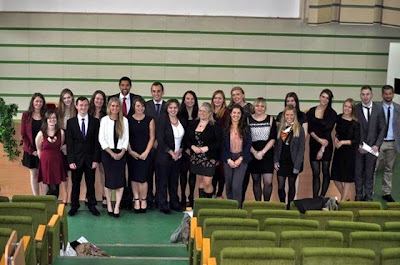 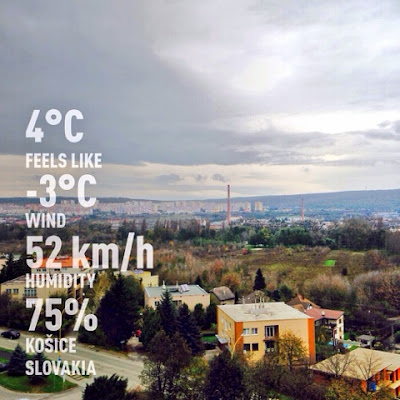 Anatomy of the Skull 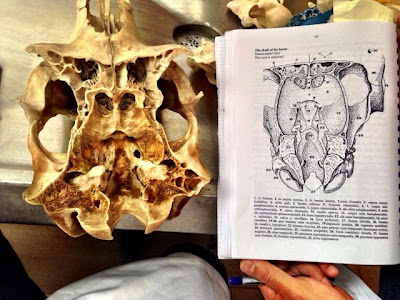 We're halfway through Winter semester which means we have Midterm Credit Exams.
We had Microbiology on Monday, Anatomy of the skull tomorrow (Thursday) and Physiology on Friday.

I got 100% in my Microbiology exam and was genuinely shocked!
Don't think I've ever got 100% on an exam, especially when I'd only revised it the night before and the morning of... Short term memory for the win.

I predict Anatomy will not go so well 'cos its one of, if not, the hardest bone in the body. 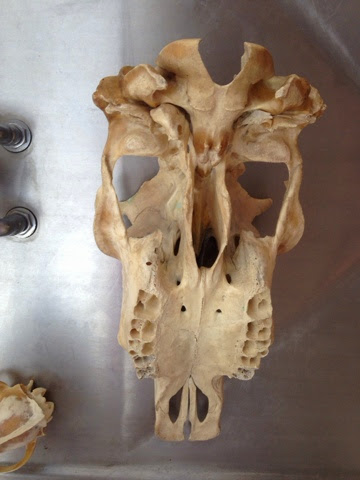 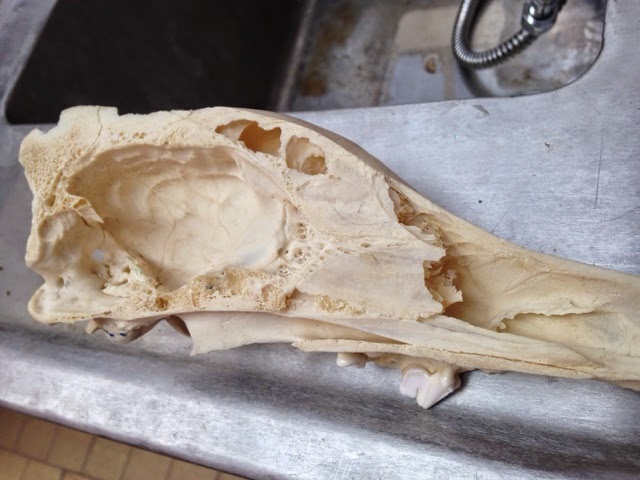 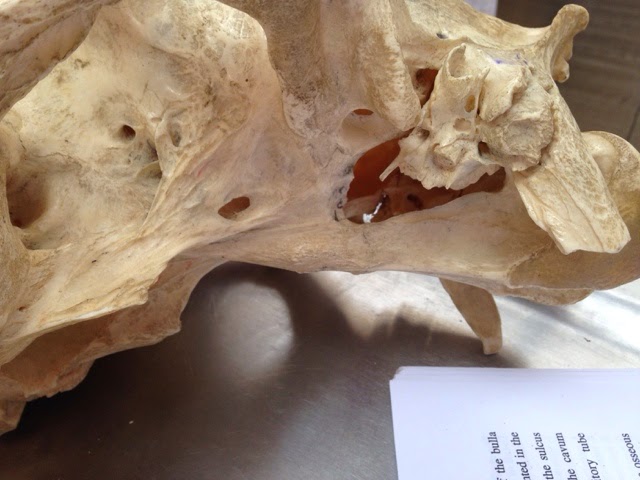 To make the week even busier, we also have Matriculation Ceremony on Thursday and a field trip with Milk Hygiene on Friday!

There's been a bit of fuss about exams this week as Group 2 (my group) have 3 exams but Group 1 have none or 1 because we have half days for Matriculation and the field trip - theirs have been delayed a few weeks so not very fair that so have ours all together but at least they'll be over and done with.
Posted by Lewis at 9:04 PM No comments:

Sian and I have been looking after Clarence the Kestrel on our own for a few weeks now.

We have to go down every morning before lectures to weigh and perch him out.

He is weight so we can monitor any changes but also to know how much he will need feeding that day. You can normally tell if they're getting overweight as they'll be less keen to work for their food so we try to keep him at a good weight so he is keen to work.

I'm really enjoying getting involved with Falconry and we're planning on going to an International Meet in a few weeks, hunting with Harris Hawks, Peregrines and Eagles!!

We got up early and went to the vets at 8:40 this morning.

Gizmo had a full health check and then his first vaccinations; the vet said he was perfect and really well behaved!

4 of us went, all with our charity foster cats, and the others were wriggly but Giz sat on my shoulder throughout just watching the world around him... 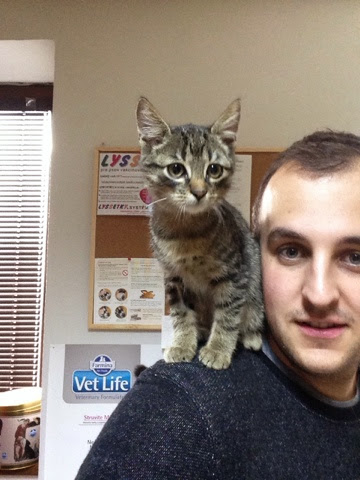 This week has flown by...

This week seems to have flown by!

I spent most of the weekend revising Anatomy and went to Self Study on Tues and Weds so I was more confident on Thursday after I freaked out last week and felt like I worked really hard for 5 days. 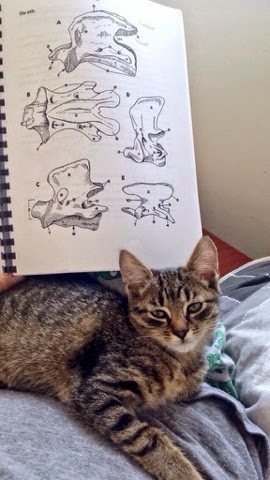 I volunteered to go first and get my oral exam over with this week and although I was still a bit nervous I didn't freak out and stayed calm! 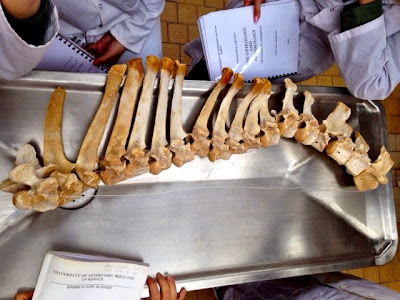 She handed me a Lumbar vertebrae so I started explaining this is Lumbar vertebrae of a horse and this is the caput as the processus spinosus point caudally... she looked at me confused and I pointed towards my head... cranially! I knew what I meant but got my words mixed up.
Anyway, carried on and explained all the points of it and didn't miss any out. She asked me how many Thoracic vertebrae are in each animal (18 in horses, 13 in ruminants, 14 in pigs and 13 in carnivores - which was fine) then lumbar which threw me but I eventually got there after an awkward silence; 6 in all, 7 in carnivores.


She then handed me a bone and asked what it was, I said 6th cervical as it had foramen transversarium and (what I thought were) lamina ventralis which are absent in the 7th cervical; she interrupted with "it's a C".

I was relieved to have passed but a bit disappointed that I'd worked hard for 5 days and only got a C which is about 75% - I'm now thinking it could have been a wierd looking 3rd, 4th or 5th cervical - we'll never know!

English teaching went well last night and much better than a Wednesday night, we had a lie in til 8:30am this morning, getting up to go Falconry.
Was soo tired but Brigid and Lucy showed us how to do Faecal Worm Egg Counts (FWEC) and luckily after a week of treatment they were all clear!

We have Latin and Physiology practical this afternoon then going back to Falconry tonight to try and get Clarence the kestrel flying Glove to Glove!
Posted by Lewis at 2:43 PM No comments:

This week has been quite hard and think we deserve a decent weekend!

I passed my Histology exam which we had on Monday, I got 72% which is a C and also had an anatomy credit on Wednesday...
I thought I'd revised it well and went tested ourselves the night before and I was ok but when I got in there I freaked out. She asked me to pick up a Tibia from a pile of bones which I did but when I got a quarter of the way through naming parts of it, I just went blank. She tried to help me through it by asking questions but I just couldn't think straight.
Next she handed me a small bone and asked me to name it and I had no idea what it was called! I knew all the parts of it basis phalangis mediae, corpus phalangis mediae, caput phalanges mediae, tuberositas extensorius, fovea articularis but was completely plank on the name of the bone... the Medial Phalanx! Still, I managed to get a D which is about 65% and most importantly enough to pass!

I've been doing my adults English lessons on a Wednesday but was finding it too hard with Anatomy credit test on Thursday morning so have moved them to a Thursday. It worked really well this week 'cos I went straight from Uni to Didacticus for the kids lessons at 2 and my adults lessons don't start til 5 so I had an hour to kill in the middle to managed to get some anatomy notes written up for next week.
It means I was out the house 6.45am-7.30pm but when I got home there was a packet of M&S chocolate digestives waiting in my room as a present from Sian!

The girls stayed in last night but I went out with Niall and some of the older years to Jazz Club and had a really good night. Anthony is in second year and went to Leeds Uni with George my best friend from home - small world!

Sian and I spent 3 hours down at Falconry club today working with Clarence the Kestrel.
We flew him from his perch to a glove with a creance (long cord) which he was really good and and then tried glove to glove which was less successful - think he was getting confused with why 2 people were working him and probably getting a bit full up too!

Then tonight we've been out for Niamh's birthday; we went to Passage to India for a curry and the food was decent but we waited ages!
We got there at 7 and out food came out at 8.45, there was a big group of us but still it was getting ridiculous. The food was really tasty but the curry was tiny considering it was €7!
Posted by Lewis at 11:55 PM No comments: 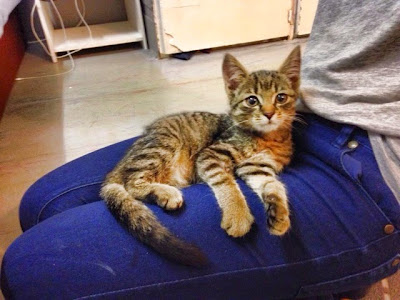 He was on the streets yesterday but a local lady took him to a charity so I'm fostering him until Christmas or a home can be found for him... whichever comes first.

The clinic checked him over, wormed him and tester for FIP (Feline Infectious Peritonitis) and FeLV (Feline Leukaemia Virus).
He's amazing well behaved considering he's come straight off the streets and has taken to the litter tray straight away. This is him and Simba, Roxie's foster kitten, who is a few weeks older - they only met each other for the first time today! 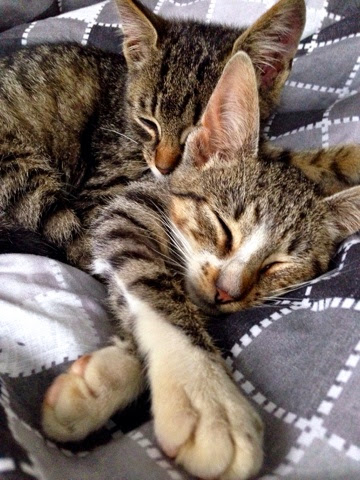 Things that you see from a window at vet school... 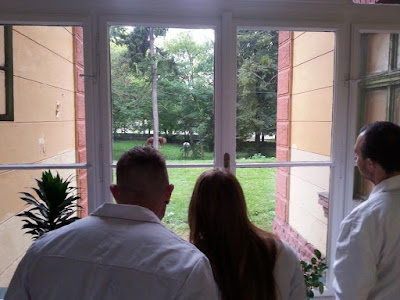 I've never been so relieved to have an exam over and done with - I passed with a C (just under 80%) so am pretty pleased with that!


We had a pointless Latin lesson this afternoon - the teacher tried telling us how all English words are either Masculine, Feminine or Neuter like they are in Latin and didn't understand why we said they weren't.
She also tried telling us the English translation of Skeleton was Skelet...

Got the bus straight into town from Uni to go and teach my Didacticus kids lesson.
They were so much better behaved this week compared to last and most of them participated in the lesson really well.

Now to start Anatomy all again ready for the Pelvic Limb next week...
Posted by Lewis at 6:16 PM No comments:

Revising bones of the Thoracic Limb

We have Anatomy credit tests at the start of our practical every week and this week our topic is Bones of the Thoracic (fore) Limb.

There's enough detail to remember as it is and then they throw in the added complication of having to know all the names in Latin!

I drew and labeled all the bones up over the weekend and have been trying to learn them and not really got anywhere.
I managed to get some actual bones to have a look at and it made it SO much easier to learn! 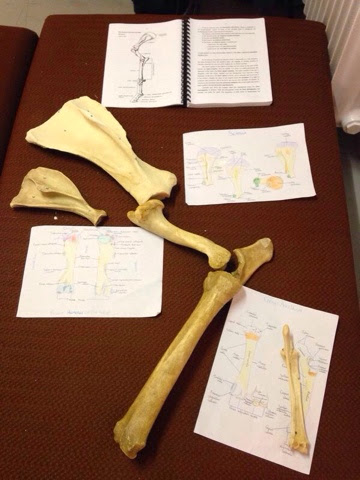 Really not looking forward to the oral exam tomorrow - I'll be happy if I just pass!
Posted by Lewis at 2:00 AM No comments: