Been to the Zoo today for an interview about Work Experience! Got up at half 7 to be ready for half 8, got to town, got our train tickets and then got the 9.30 train, 20 mins later we were there. Was about a 10 minute walk, didn't quite know where we were going but spoke to someone, said who we were (was with my friend Cody) and they said "She'll be down in a minute".

5 minutes later a lady walked out the house towards us with something on a lead... 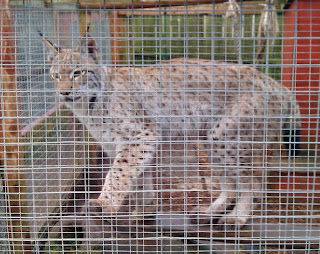 Nillie the Lynx! She was hand reared and is only a few months old, so still has some growing to do. Jean, the boss, picked her up and we stroked her - she purred so loud! She still lives in the house at night but goes outside into her run during the day. The zoo have two 18 year old Lynx brothers who she'll eventually live with.
Jean then spoke to us; were asked what we'd done before, what animals we liked, jobs we wanted, about Uni etc, then filled in a form.

I was put with a keeper called Elaine, and we went off to do all the birds. Mixed up the feed and put them ready in their bowls. Chickens and Call ducks obv had layers and corn, Kookaburra had 2 mice and 2 chicks, then we did some african carnivorous birds, budgies, parrots, finches, 2 (eagle?) owls, peafowl. There are 2 rhea and 2 emu too, but we didn't feed those. Fed the chipmunks and a couple other little furries.
Theres loads more animals but Cody went round and did those. Snakes, tortoises, crocodile, lizards, monkeys, couple of groups of lemur, wallabies (who live with the chickens!), a porcupine.
Then the normal pigs, ponies, rabbits, guinea pigs, sheep and goats ... you get the idea :P
Me and Cody then went and scrubbed down all the walls and cleaned the windows in one of the monkey houses and mopped the corridor.

Was a good day, only expected to be there a couple of hours but we were there all day until 4! then got the bus back to Aber.
Its only a little place but they have some really good animals. They all seem friendly and well looked after, the only thing is it just looks tired and could do with freshening up. Bit of paint and new signs would make it a lot better, but it costs money and who am I to say that on my first day :P

Back next week! :)
We're going to go every Wednesday - finish lectures at 11 and then will go straight to the Zoo.
Posted by Lewis at 6:11 PM No comments:

Think I mentioned it the other day (on my other blog), I'm getting kind of bored just being in the flat all day and with the same people. Only really recently so probs to do with exams, but thought I could try + get some work experience 'cos it'd be fun and is relevant to that there degree I'm meant to be doing :)

Applied for work exp at Borth Zoo, which is a 20 train ride from Aber (although the trains only go every 2 hours) and thought I could go on a Wednesday afternoon 'cos we have that off to do "sport".
The lady replied and said yes, when was I thinking about going but I haven't heard back for a couple of days.

Also emailed someone this morning from a Llama Trekking place, in Burton near home. A friend went and so I thought I could ask. Its about half an hour from home but Grumps works (a further) 10 mins down the same road so I thought he might be able to drop me there on the way to work! :)

Would obv have to go at Easter or over the Summer, but thought I could just ask and see what they say
Found out Lambing starts on March 17th this year, so will still be at Uni but will probably go when I'm home 3 weeks later :) Want to do some in Wales too, would be silly not to! :P

I also need to try and find a 6 week work placement for Uni which counts as one of the modules for next year. Can't really think of anywhere close to home except for a couple of farms and without having a car it'd have to be close. Did think about the vets but the one I've been to before is 40 mins away and the new one round the corner still isn't open and even though they're still working on if it you drive past, I can't see it ever being done!
On the other hand I thought I could go the opposite and go somewhere further away but stay there and do it like that.
6 weeks is a long time though!

Was asked last year to work for someone over the summer and would have loved to have done it but the distance was too far, might see if I can do it this summer and see if it counts as a work placement for Uni :)
Posted by Lewis at 12:51 PM No comments: