Was SO happy with Womble (one of the rescue ponies) today! :D 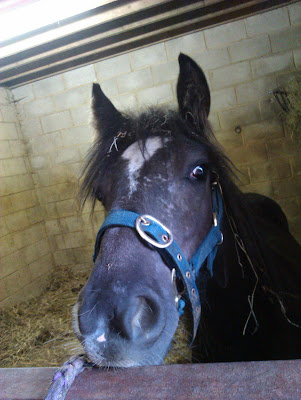 He let me hold him on a lead rope straight away this morning, then we let him smell the brush + managed to brush him all over (apart from his tail) combed his mane and let us spray him to make him all shiny.
Kevin came to look and was surprised! After a few goes I managed to pick up his foot and then Steffie hoof picked his front feet and everything! 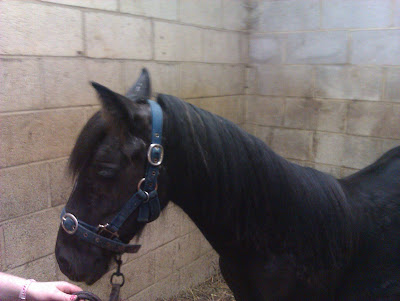 We took him for a walk onto the yard on a lunge rope with Kevin and took a few photos, took him back to the stable and he refused to go in for Steffie + Kevin and would only go in for me :P

Considering he needed 2 lots of sedations and a tranquilisation dart just to get a head collar on him a few weeks ago, he's come a MASSIVE way in just 2 days.
I think he really trusts me now + know it sounds stupid but theres some connection!
ily him :))
Posted by Lewis at 7:36 AM No comments:

Been a horsey day at work today!
Helped Steffie muck out all the stables, I say help, I just held the horses, got straw and emptied the barrow. Think theres 16 although a couple have chicken stuff + tack in!

We took a few horses out to the field to give us 6 stables for some horses coming in.

Womble the little pony came in as a rescue and was really skitty and has been calming down a lot.
Me + Steffie went in and he let me hold his head collar rope today so we stood with him for ages. Let him go + did it again. He doesn't like women as much but eventually let Steffie get him.

He still won't let us touch him much, only his nose + face, but managed to scratch his neck :)
Posted by Lewis at 7:13 PM No comments: