Today I was mainly an astronaut 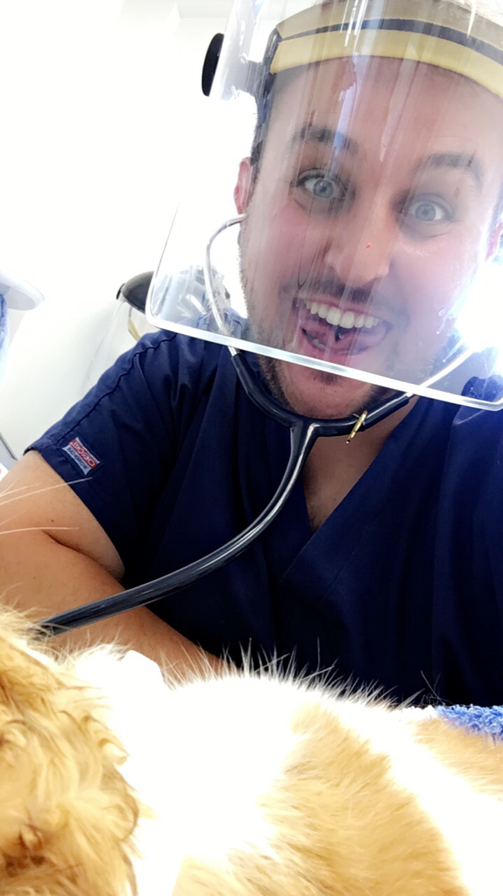 I've just completed the WVS Surgical Training Course at the ITC Ooty in India and can honestly say it's been one of the best experiences of my veterinary career so far. 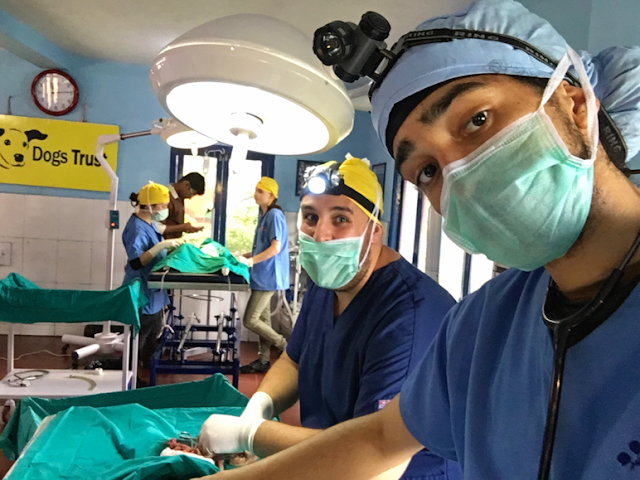 The course was well structured, including everything I'd hoped to cover and more. By the end of the two weeks I'd done 8 dog castrates, 8 bitch spays and a scrotal ablation. 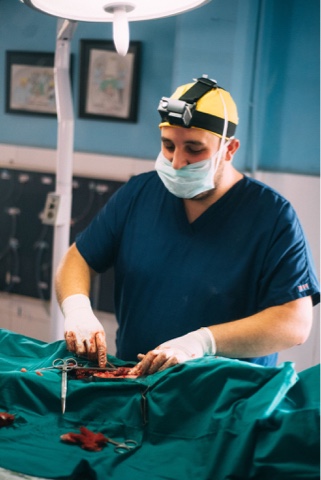 The ITC work under 'limited resources' in that they don't have access to a huge range of drugs and equipment we do in the UK. They have had anaesthesia available but only at one operative table so it's used for longer surgeries but neuters are done with Total Intra-Venous Anaesthesia. We have a protocol using 10 injectable drugs for anaesthesia and analgesia (pain relief). 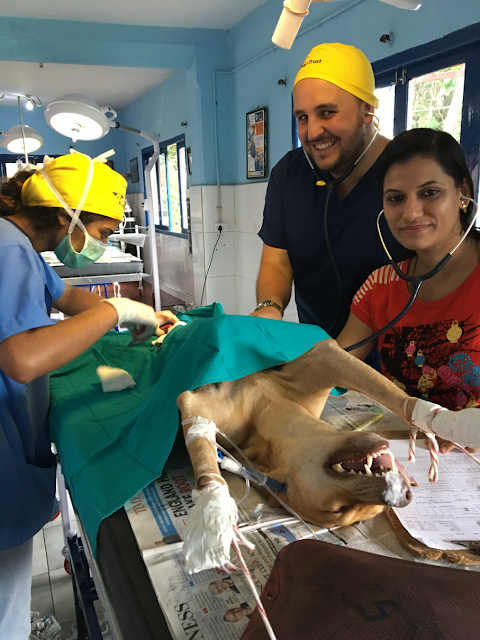 At first it sounded daunting and we have to monitor patients much more closely under anaesthesia but the protocol was explained well and the lecture we had was great so I understand the drugs we use and why we used them. It also meant that we could use the protocol in individual animals should they need more pain relief or anaesthesia.

Even though they're under limited resources the staff they have are amazing, particularly Dr Vinay and "the boys". The boys are a bit like our nurses and technicians/VCA's in one. They catch the dogs for us to sedate then prep and scrub them for surgery as well as monitoring anaesthesia and prepping all our kits, surgery and much much more. 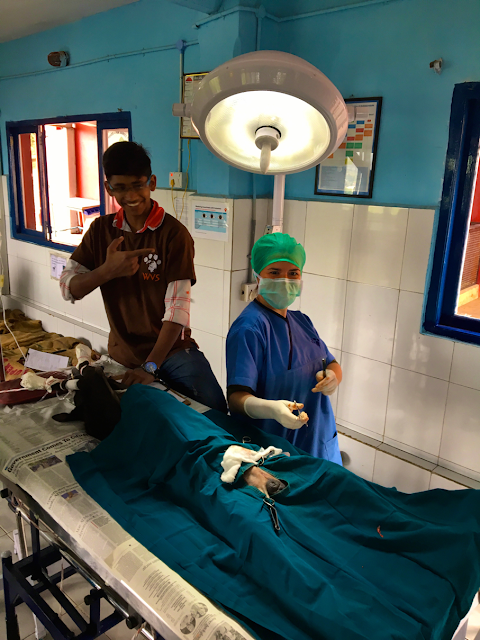 The care each and every dog receives is second to none, with constant monitoring throughout anaesthesia and recovery, we even had pulse oxymetry which some clinics I've been to back home don't have.

I've done a fair bit of work experience and assisting in surgery back in the UK but have always had a vet scrubbed in explaining the procedure, checking my ligatures and any bleeding. 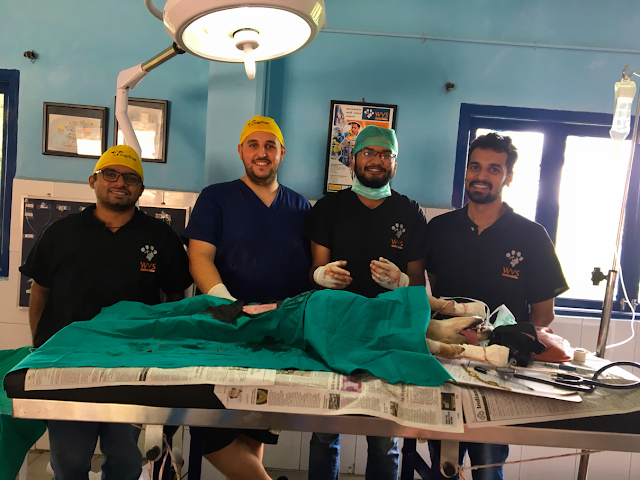 At the start of the course we had vets scrubbed in to supervise but I'm now confidently doing dog castrates and bitch spays all by myself with no assistance, complete with intradermals. 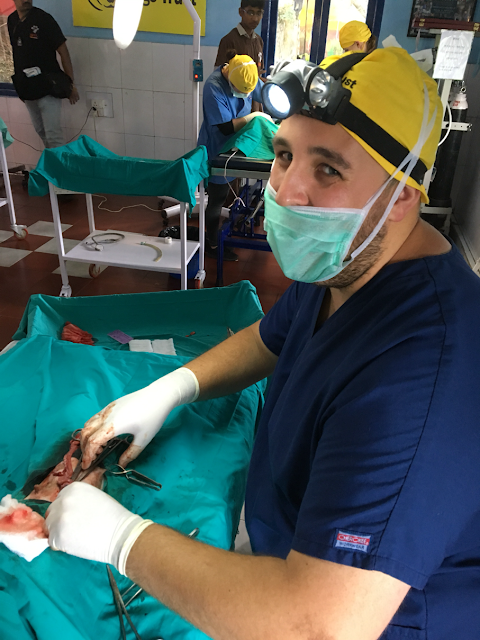 Intradermal suturing is something I've never done before but as we are operating on free roaming dogs we want them recovered and returned back to where they came from as quickly as we can. Intradermals mean we don't need to take stitches out after a week.

During rounds the following morning we checked every dog giving them a wound score and pain score followed by pain relief and a rabies vaccination. 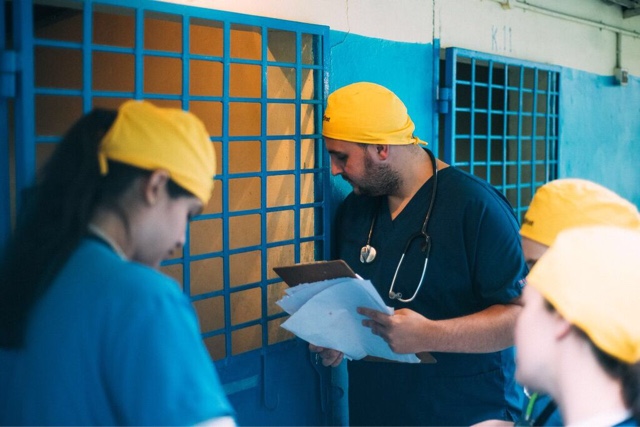 That also gave you the opportunity to check your tissue handling and intradermal technique and we could see how our wound scored improved over a few days.

During our first week the ITC neutered their 20,000th dog which is a huge achievement and shows the expertise and experience the staff have. We celebrated with a giant chocolate cake and dog 20,000 was given extra treats that evening.

Accommodation was in single sex dorms which were clean and better than I anticipated in that we had wifi and a flushing toilet! The food provided three times a day was amazing, all vegetarian and not too spicy as that could be added individually. 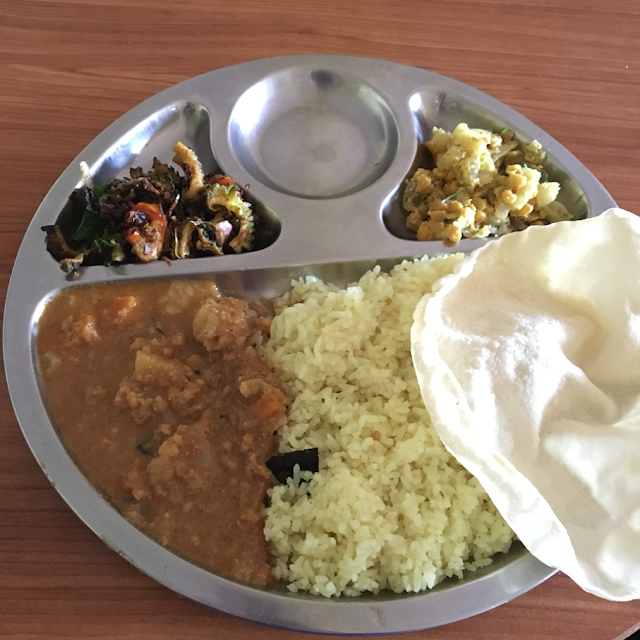 The cook definitely ramped up the spice slowly over the two weeks which we loved. 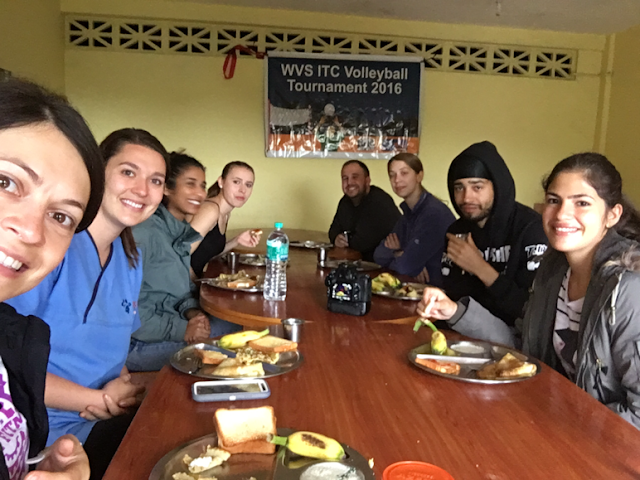 I would recommend the course to every vet student and new graduate wanting to gain confidence in soft tissue surgery.

I spent a further two weeks after the course travelling around India and found myself comparing everything to Ooty. While I fell in love with India, the cooler climate and calmer pace of life in Ooty suited me perfectly and I would love to return to the ITC in the future as a volunteer vet. 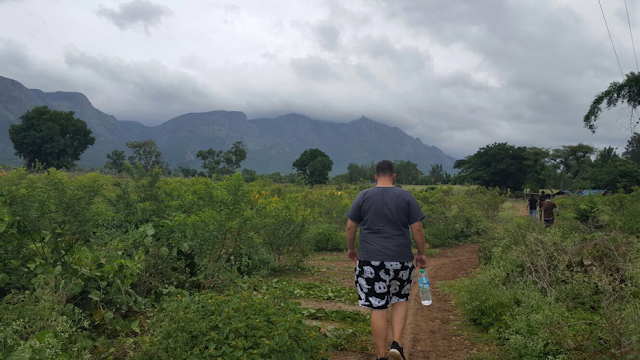 Another early morning as we left the ITC at 6am and headed an hour down the hill, all 36 hairpin bends, for a day of vaccinations. 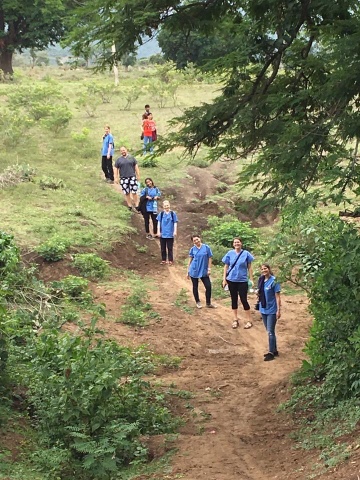 While we have been vaccinating the dogs post-surgery against Rabies, this was the same project but a 6-in-1 vaccination against the most common diseases found in dogs. 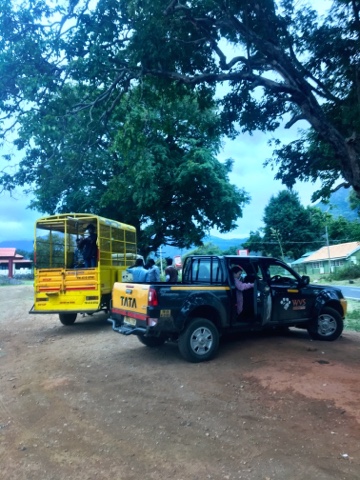 We stopped at a hotel for breakfast and were served the most amazing dosas. Everyone has been understandably weary of where we eat, avoiding meat and salads, but this hotel looked really clean and the food was decent. We each had a huge dosa stuffed with spicy veg and potato served with a savoury coconut sauce, not typical breakfast food but soo good.

Once again we split into two groups and headed out with our trucks, supplies and "the boys" who catch the dogs for us. 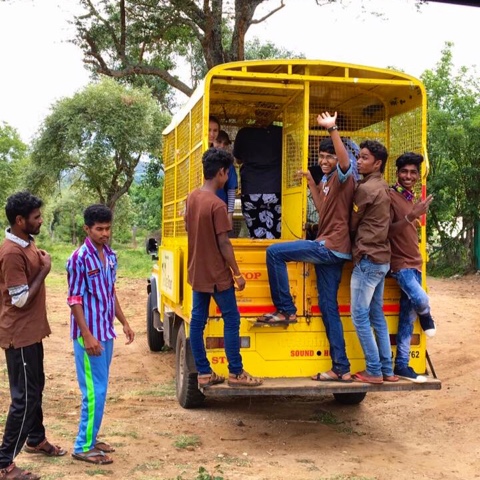 We drove along a rural lane stopping at each house to see if they have dogs and offered free 6-in-1 vaccinations. The owners were very willing to have their dogs vaccinated as WVS have such a reputation in the area and have worked hard to educate people as to the importance.

Those with owners were generally contained in a yard or on a chain but many needed to be caught by the boys for us to vaccinate them. 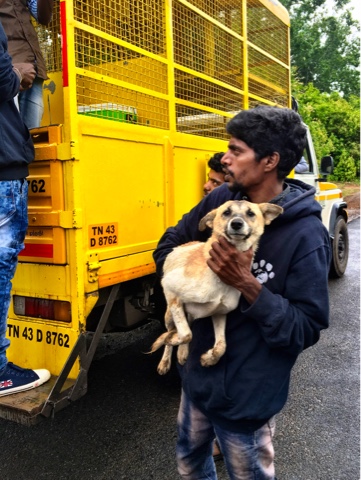 The free roaming dogs were more of a challenge as they tended to hide once they saw us coming so the boys went in armed with butterfly nets and were super efficient as catching them; if it was left to me we'd still be waiting to catch the first one! 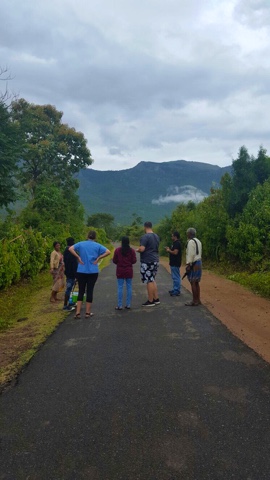 Between us we vaccinated 100 dogs which are all recorded in an app based database including the sex of the dog and whether they have been neutered by WVS by checking their ears for notches.

There were a couple of dogs which needed first aid treatment including one which had picked a fight with a wild pig and others needing veterinary attention will be picked up and brought to the ITC on Monday.

It was really nice to walk around villages to meet people and see the real India, things you wouldn't normally see as a tourist and an insight into how people live. 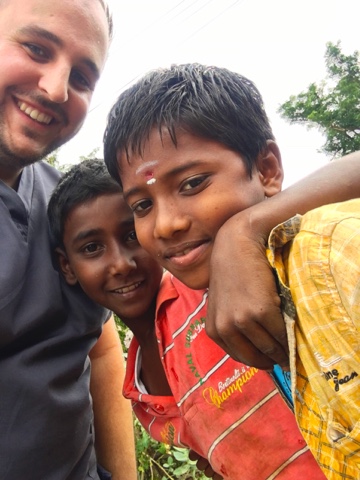 Lots of the boys live in the villages we visited so they are familiar with the area and people around them.

Back to the same hotel for lunch and then a trip to IPAN, a shelter ran by Ilona and Nigel for all sorts of animals from all over India, be they ex-circus animals, ex-racehorses or those with injuries needing care. They had dozens of horses, donkeys and goats plus over 20 horses at their home.
We were invited in for tea and saw photos of some of the work they've done which were amazing. They really have dedicated their entire lives to helping animals, the ITC and IPAN.

Unfortunately a horse they rescued a month ago had been very sick and died this morning of an obstructive colic. 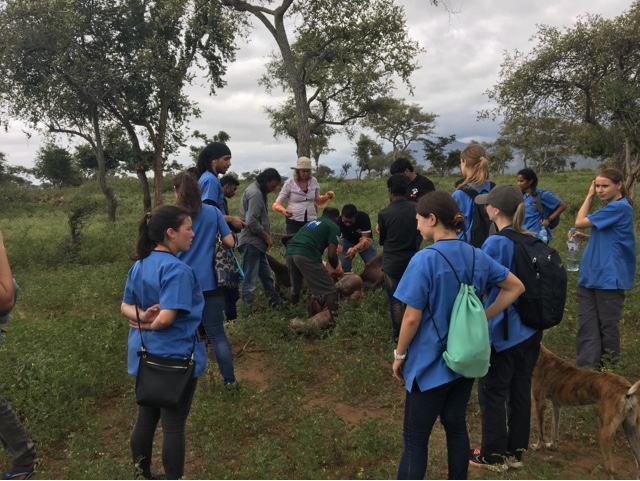 We were able to see the post mortem and found a linear foreign body in the small colon which after removing was obviously plastic. The horses are often seen eating rubbish at the roadside and from skips so it must have accumulated and caused an impaction. 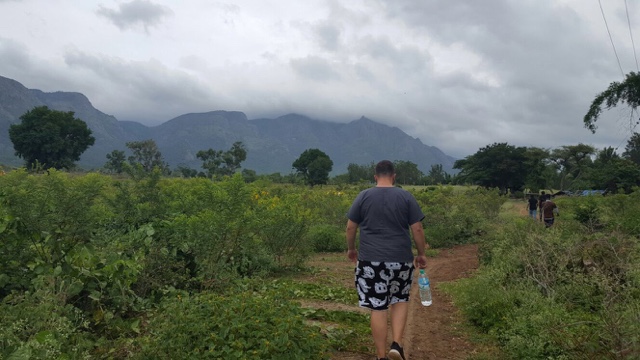 The first week of our surgical training course is over and it's been an amazing experience. It's been a hectic week but everyone here is so nice, staff and participants, so it's been a pleasure. 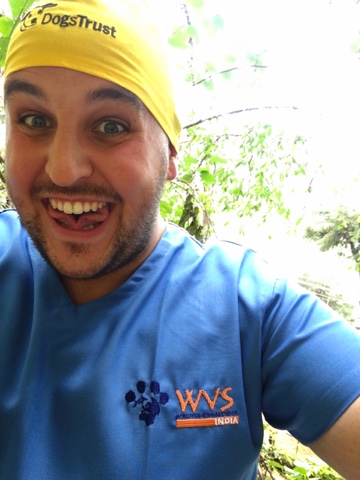 There is an on-site chef who cooks us all three meals a day and the food is soo good!

A typical day starts with breakfast at 8am then rounds at 8:30 before we start a day of surgery.
There are 10 of us so we're split into pairs, A and B, so while A is operating, B will be maintaining and monitoring total intravenous anaesthesia. The drugs protocol is already devised for us with ten drugs as standard to include anaesthetic, analgesia (pain relief), antibiotic, anti-parasitic and finally a rabies vaccination. We are able to add to this if we feel the dogs need it during or after surgery.
Surgery tends to finish between 4:30-5 when we will have a break then a lecture 6-7 before evening rounds and dinner at 8:30.

On Monday we started with lectures and a tour of the campus, then we observed demo surgeries to go through procedures and what's expected of us. 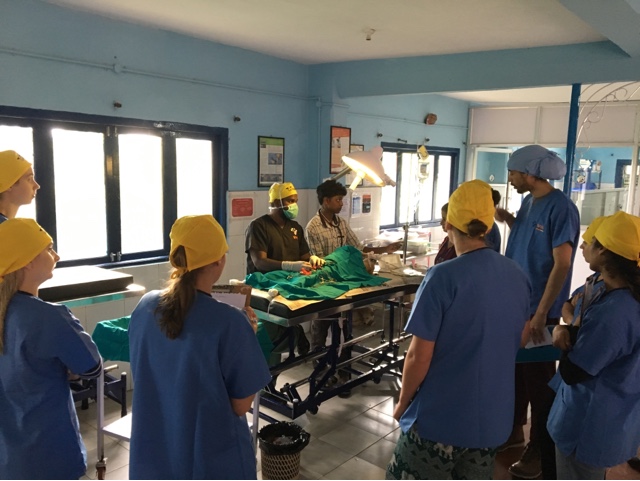 Tuesday morning we each performed a surgery each followed by an afternoon of anaesthesia lectures. Then from Wednesday we've each done two surgeries every day.

So far I've done four dog castrates and three bitch spays which have all gone well. Of course I've made a few mistakes with suture patterns etc but I'm learning so much!

Intradermal suturing has always looked fairly easy but it's actually really tricky. I've learnt to take my time and finally got the hang of it today - the vet said he was impressed but there's always room for improvement. 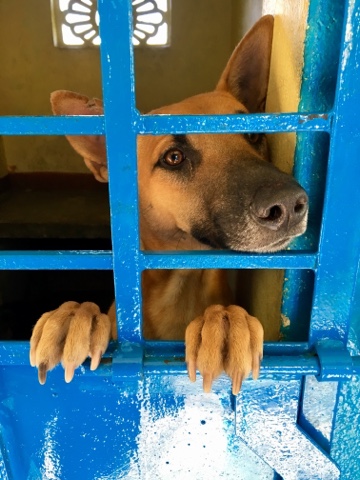 Standing all day and operating has ruined my back. I'm not sure if it's because of the table height or because I'm leaning over too much but I guess it's something you have to get used to and muscles will strengthen with use and experience.

Tonight we went out for dinner in Ooty which was really nice to get out of the campus and have a drink to relax with everyone. We spent the night talking about non-vet stuff which was a welcome change! 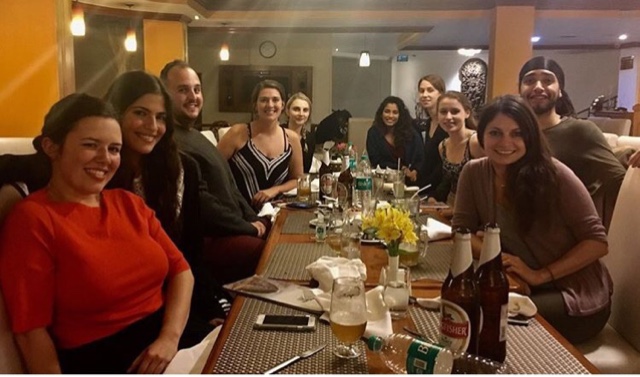