Back again at quarter to 9. When I go there, John and Lucy were just taking some new lambs out of the big pens and into the smaller pens, so I helped them to do that - when they were in we gave them Spectam and Iodine on their navel. When that was all done, we bedded down the big and little pens with straw, and then topped up the hayracks and waters. We fed 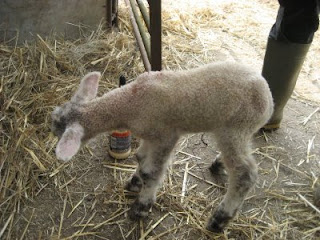 all of the sheep with corn and then gave the cade lambs some milk.
Wobbly William the deformed lamb is still alive and is standing up today, so that had some milk, and so did the other 2 of the triplets.

Some of the older stronger lambs and the ewes were sent out to the field in the trailer, so that freed up a few pens. 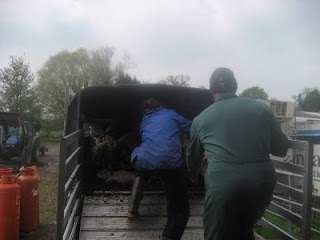 While John was taking the sheep we had a bit of a sort out and moved the ewes which were still in lamb into one of the other big pens, so they only take up 3 pens now so the other is used for the stronger lambs.

We went round and rubber ringed the lambs and trimmed the ewes feet and gave them all ID numbers. I took a few photos of all the things we used: 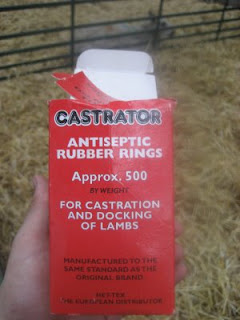 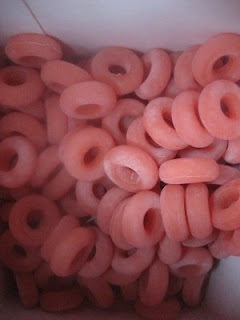 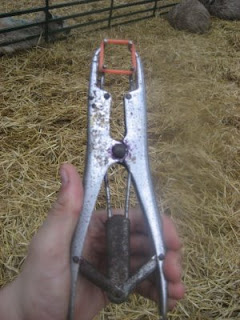 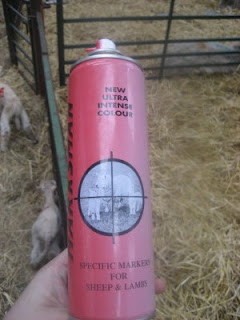 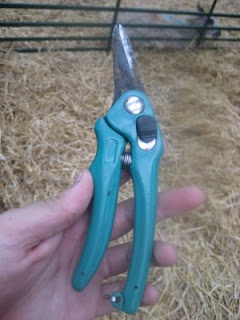 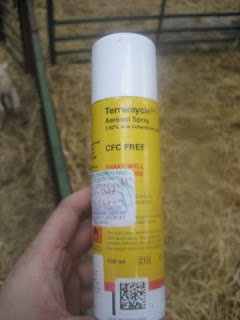 Terramycin - used if you cut the ewe's foot 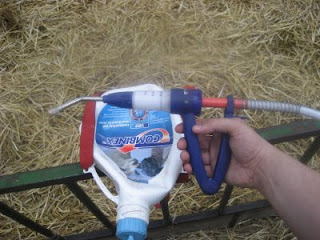 When we'd finished had lunch. Afterwards we went and checked all of the sheep had hay and water, then bottle fed the lambs again.

We moved the newborn lambs into new pens, and did some more rubber ringing and trimming of the ewes feet.

One of the single lamb ewes which had been put back in the big pen was limping on her front right foot. We caught her and John trimmed the foot back more and she had a bit of a sore in between her foot. We sprayed it with Terramycin and hopefully she'll be ok.

We went around again and gave everyone fresh hay and water, fed all of the sheep and then bottle fed the lambs. I left just after 4 o'clock.

I got to the farm at 7.30 today because Dad dropped me off on the way to work.
The milk buckets which the lambs drink from needed cleaning so I scrubbed those out and then got on with bottle feeding all of the cade lambs and the weaker lambs.
Lucy got there just after 8 so we bedded down all of the pens, changed waters and hay racks and then fed all of the sheep with corn.
We moved some more stronger lambs and ewes back into the bigger pens and then took the newborn lambs out into the spare pens.
Lucy and I took it in turns again to trim the ewes feet, and to castrate and dock the lambs tails. We sprayed them all with ID numbers - John uses red for twins, whereas Louise uses Blue.
John and Louise went to go and put out some more sheep, and after a while there was a ewe which had a head coming out the back of it, we left it a few minutes and there was no sign of feet. We got her lying down and I put my hand in to try and feel for feet. One of them was right there ready to come out, and the other foot was backwards against its body. I pulled the closest foot, and it came out fine. There was also a ewe which looked like she was trying to lamb and her waters had broken which had been a few hours, but we left it and waited for John.
When he got back he put his hand in and could feel the lambs back, Lucy and I both put our arms in to have a feel and to see what was abnormal, the lambs head was right down and the back was coming out first. He lambed it and it looked all deformed when it came out. He delivered another two lambs and we got them all breathing by clearing their mouths and rubbing them with straw. The deformed one has big shoulders and a bit of a bent back. 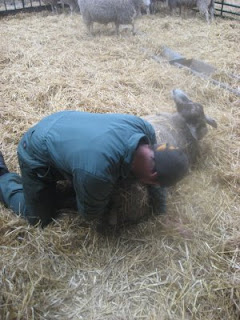 Afterwards we set up the race in one of the fields with the Charollais sheep in it, went and had lunch and then went back and rounded the sheep up into it. 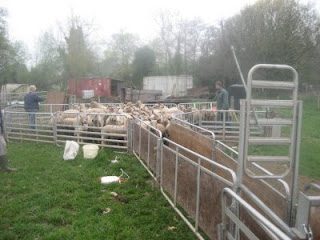 They lambs all needed to be injected with Heptavax which is a bit like a flu jab, whichis injected intramuscularly into the back of the neck and the ewes needed to be wormed, which is done similarly to the other sheep - with a special applicator gun injected into their mouth, the only difference being we used Panacur (instead of Combinex).
Because they are pedigree sheep, they need to be kept close to the breed standard in order to produce good lambs. When they were all in the race, I went down and checked all of the ewes' bags, and any of them which were lumpy or hard had a red circle sprayed on their head, and they will go off and be slaughtered, there were only a couple with bad bags. There were also a few lambs which had dips in their backs, so they will have to go. I felt bed sending them off to slaughter because they weren't perfect, but obviously it had to be done for the good of the breed as a whole so it was kind of justified.

We needed to put more ear tags in a few of the ewe lambs which DEFRA had sent. 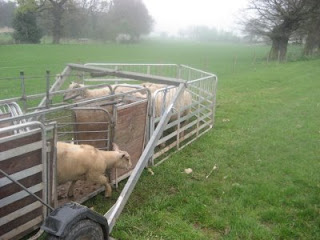 We penned up the newborn lambs and we're going to give the deformed one a chance - we've named it Wonky William because it hasnt stood up yet.
After filling up all of the hay racks and waters, we bottle fed all of the cade and weaker lambs. I left just after 5.
Posted by Lewis at 10:00 PM No comments:

I got there at half 8 today, and the new girl is here, she's called Lucy and is doing an art degree and wants to be a vet, entering as a post-grad.
We bedded down the big and little pens, gave all the sheep hay in their hay racks and then cleaned all the water buckets and gave all the sheep fresh water.
We fed all the sheep with corn and then bottle fed the lambs which needed doing - both the cade ones and the ones who's moms have no milk. John showed lucy how to bottle feed the lambs then went off to feed some other sheep. She was doing it and called me over because it had gone floppy and stopped breathing. Somehow the milk had got into its lungs and not stomache and I remembered when it happened with a newborn lamb that wasn't breathing, John held it upside down and swung it. So I did that and milk started coming out, we pinched its nose and shook it again running it and it coughed and more milk came out. We checked again and it was breathing so we made sure it was ok and put it back in its pen.
All of the newborn lambs born during the night were moved into the spare little pens and gave them a squirt of Spectam and dipped their navels in Iodine.

I told Lucy about what we had to do to the lambs and ewes, and then Louise came over and showed her how to do everything. Once she knew how to do it, we both rubber ringed the lambs and clipping the ewes feet, swapping between ewes and lambs.
When we'd finished, John took us to a field up by the quarry and we set up electric fencing all around the outside. We stuck stakes in the ground every 12 paces, and then fed the wire through the slots in the stakes making sure that you don't cross the wires. The reels of wire are then secured onto a special pole and tightened.
When we got back, we had lunch and a few more ewes had lambed, so we took out those lambs and the ewes and penned them up.

Me and Lucy made sure that all the pens had water and that the hayracks were full, then fed all of the cade lambs with water.
Posted by Lewis at 9:37 PM No comments:

Today is Easter Sunday and after a week in Scotland, I'm back lambing :)
Johns sheep have all come in now, so they are all in the new shed and have been lambing since the start of last week. There are only a few (about 20) of Louises sheep left to lamb.
I got to the farm at 9ish and got started with the waters and hays, then bedded down all the pens. John is feeding his sheep a mixed up feed of corn and wheat because it is a lot cheaper - instead of the sheep nuts Louise uses - so we fed the sheep with that. Theres a pen of cade lambs now, so they all needed feeding with milk, along with the weaker lambs or the ewes with no milk in the smaller pens. 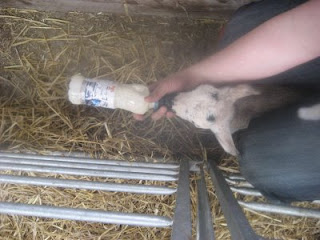 There were no spare small pens, so we moved some of the stronger twins back into the bigger pens, and then put the newborn lambs and their mothers into the spare smaller pens.
Louise and John went to move some sheep, so I got on to rubber ringing, numbering and clipping the ewes feet - Johns lambs aren't scabivax'ed.
The livestock trailer which John was using for his sheep needed washing aswell as one of the turkey trailers - so I was the lucky person who got to do that. I wet it all so that it would be easier to clean. I got rid of all the dried blood on the floor and walls, and then washed the rack which the turkeys are hung up on. Then I started on the trailer, putting water through the windows to push all the muck down to the front with the jetwash. I climbed upstairs and started cleaning the floor and getting all the poo off the was dried onto it, which took most of the time. Then I did the walls and the roof (I have no idea how the roof got dirty!). After the upstairs was done, the downstairs was even dirtier, so I went and cleaned the floor then the walls. After I'd finished I was soaking and completely covered in "muck", blood and feathers. It was strangely fun though :)
I fed the sheep, bottle fed the lambs and changed the waters. I left just after 4 o'clock.
Louise said there is another girl coming tomorrow to see some lambing.
Posted by Lewis at 8:18 PM No comments: