I went to lectures this afternoon followed by a visit to a "Free Range Egg Production Unit" ...Birchgrove Welsh Free Range eggs out near Trawscoed.

We were given bio-security overalls + boot covers, shown around the sheds and stroked the chickens!
There were chain feeders and auto drinkers throughout the sheds so they had constant access to feed with nest boxes along one side which were astroturfed with eggs rolling off and onto a conveyor belt. 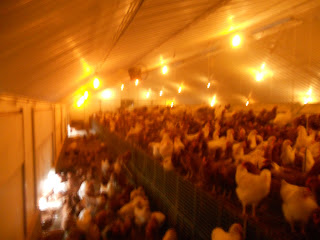 Everything was suspended from the ceiling so that they can push a button and all the feeders, drinkers and nest boxes all raise up to the roof, the slatted boxes you can see down the middle are collapsed, and they can drive a mini quad/tractor in to push out all the dirty bedding! 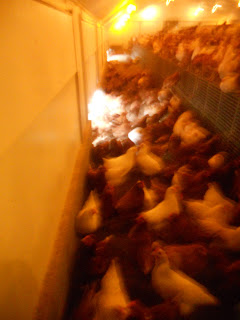 The eggs are laid in the astro turf nest boxes in the middle of the shed, which rolls along like a conveyor belt + the eggs roll out: 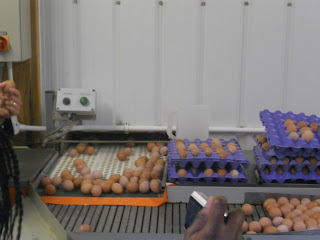 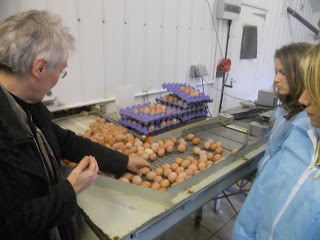 They have the grading, stamping and packaging machines there and distribute themselves all over Wales and around Aberystwyth in retail stores.

Out of the shed and outside to the range: 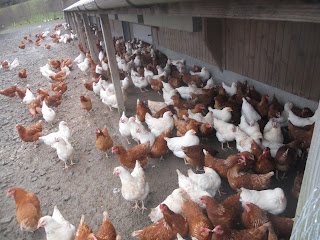 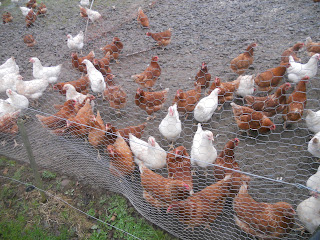 They have 10 acres for 3000 chickens - legislation allows double that but there was a lot of space for them outside.. 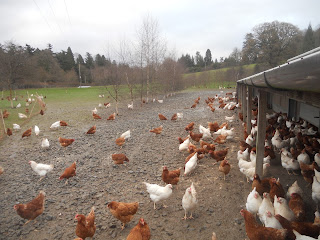 We were able toask questions at the end - I was interested in vaccinations and worming regime they used, she couldn't remember what they used until I prompted her with Flubenvet? - "Yes! that's it!"

They have a specialist poultry vet that flies around the UK in a helicopter he's so much in demand!!!
Posted by Lewis at 6:04 PM No comments: